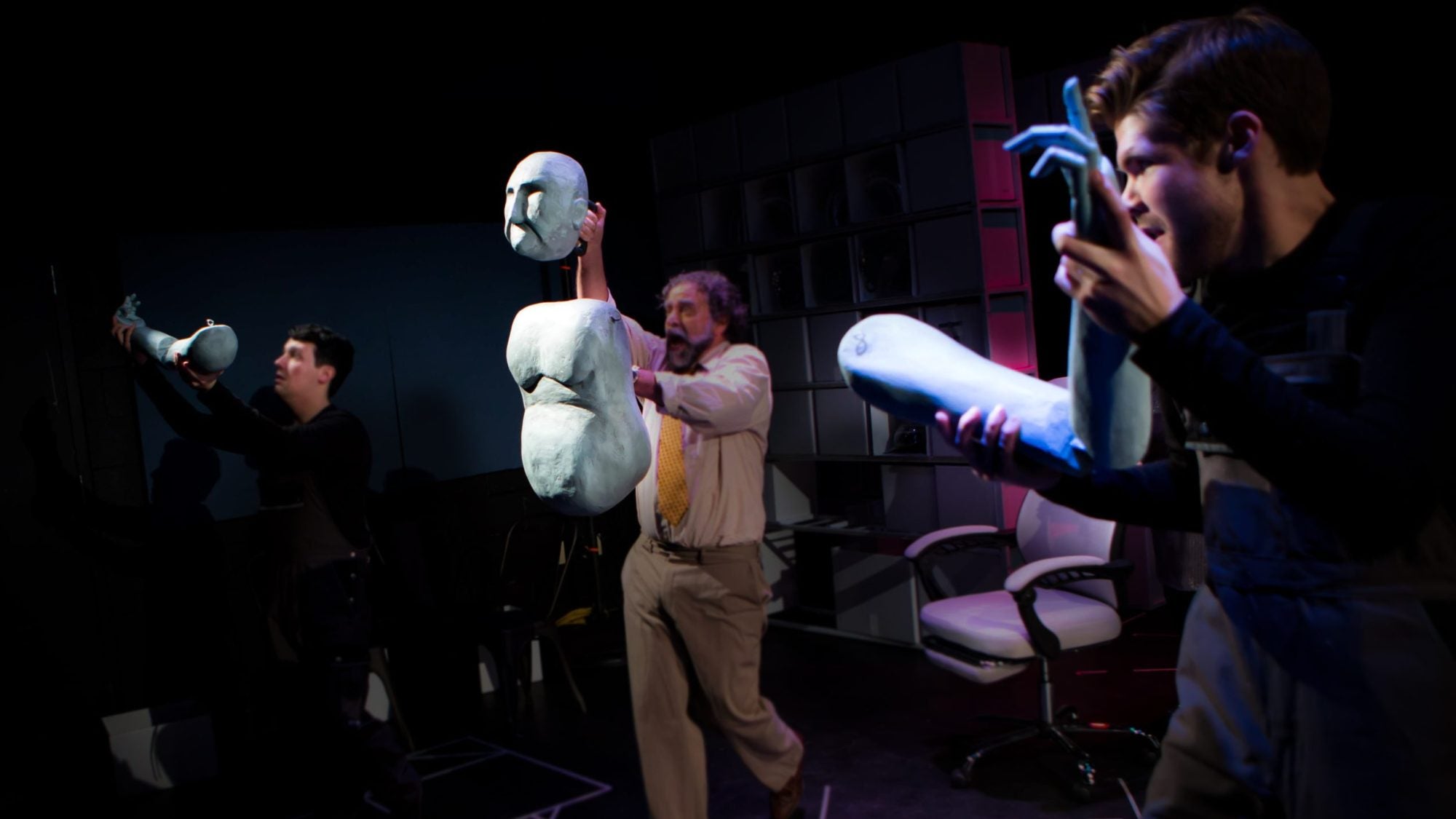 Title: Educating the Whole Person Onstage, on the Track, in the City

As part of our Spirit of Georgetown storytelling series, we spotlight community members who demonstrate Georgetown’s commitment to educating the whole person — mind, body and spirit. By tending to our artistic, physical and spiritual lives, we are also supporting our holistic emotional well-being and growing into the fullest version of ourselves to best be of service to others.

“Let’s base all of our choices on whether he likes it or not. This was a radical departure from theater that must entertain hundreds of people in the audience.”

Natsu Onoda Power, a professor in Georgetown’s Department of Performing Arts, was working on an adaptation of Michel Foucault’s Madness and Civilization. Her intended audience was not the typical crowd you might find at a Friday night show or Sunday matinee. It was an audience of one — her brother-in-law who was residing in a group home with others living with mental illnesses.

Onoda Power is known for her ensemble-driven works that bridge visual art and live performance. She’s created visually stunning works out of dense texts like Charles Darwin’s On the Origin of Species and Michael Pollan’s The Omnivore’s Dilemma. But this play was different — a different audience, different site and different purpose.

“The premise was ‘let’s adapt this really historically dense book for this man who’s living with schizophrenia.’ And then the goal is for him to be engaged and entertained throughout.” she says. “Someone who is living with mental illness in a group home is not the ‘intended audience’ for our mainstream media or consumerism; he lives in the margins of society. I wanted to bring him into the center.”

Onoda Power and the Georgetown students ran an improvisation workshop with the residents, where they found new purpose in familiar rehearsal exercises.

“That turned out to be probably the single most enriching day of my teaching life,” says Onoda Power. “It renewed my understanding of what these theatrical exercises do and what theater does. It is about connecting with another human being.”

Her brother-in-law continued to consult on rehearsals, and Madness and Civilization premiered in the Gonda Theater as part of the Davis Performing Arts Center’s 2009-10 season, “Going Mad: Shattering & Re-Imagining the Real.”

Onoda Power continues to teach “Performing Madness,” most recently in the fall 2021 semester. An Englehard course, the class infuses introspective health and well-being topics into the academic content.

“I teach this class in the way that I do because it’s Georgetown,” says Onoda Power. “And I think it’s a unique fit to Georgetown students, who are concerned about educating the whole person and the relationship between wellness and education and performance.”

“I firmly believe that knowledge is not something that’s transmitted in a classroom, but knowledge is something we create in it by responding to material knowledge that people have built before us.”

“Your brain is only one part of your body, and people learn in different ways, too,” says Onoda Power. “I firmly believe that knowledge is not something that’s transmitted in a classroom, but knowledge is something we create in it by responding to material knowledge that people have built before us.”

And true to Onoda Power’s practice of learning in community and creating knowledge as an ensemble, she continues to learn and grow with her students.

“I learn so much from my students,” she says. “Georgetown students tend to gravitate toward theater as means of communication, social justice, education — and that’s very empowering and interesting for me.”

“I was extremely nervous. Like, I threw up before the race.”

Maazin Ahmed (C’22) is a senior on Georgetown’s cross country and track team. But as a first-year at his first-ever meet where he traveled by plane, his nerves were getting the better of him — until his teammates stepped in.

“The way my teammates encouraged me was through humor,” Ahmed recalls. “They kind of just made fun of me about my nerves and saying, ‘wow, this is not gonna be a good day for you.’ But because I was able to laugh at my nerves and have other people laugh with me, it made me feel normal.”

During his time at Georgetown, Ahmed has found the support and friendship of his teammates to be among his most meaningful memories from the Hilltop.

“I think the most important part of being a team is supporting one another,” says Ahmed. “Everyone says track’s an individual sport because you’re running your own race. But the support that you get from your teammates is really what makes you better.”

A psychology major and Arabic minor, Ahmed is familiar with juggling collegiate athletics with coursework and self-care. He has benefited from the time management learned from training, and during a five-week academic summer program as a Community Scholar, he attended orientation workshops that helped him understand the importance of caring for and talking about mental well-being, too.

“I think it just gives me structure. I’m able to break down my day into certain time blocks, whether that’s to rest or whether that’s to do homework, but more importantly, it’s to take care of myself outside of running,” Ahmed says. “I think that’s the most important part about being a student athlete — taking care of yourself outside of the sport because you can’t compete if you’re hurt.”

The lessons learned with his teammates don’t just apply on the track. To Ahmed, part of educating the whole person is making connections across all parts of ourselves and understanding that learning is not limited to exams and essays.

As Ahmed looks ahead to graduation and graduate studies in high school counseling, he continues to apply his disposition toward personal growth that he learned both on the track and in the classroom at Georgetown.

“You never really stop growing as a person,” he says. “I’m not saying that you have this image in your head and you’re chasing that image. I’m just saying that every day you’re waking up and you’re saying, ‘this is something that I haven’t done. Let me try it.’”

“God doesn’t just exist in a church or a mosque or a temple or synagogue,” says Rev. Gregory Schenden, S.J. “And that’s why I think I was so drawn to Ignatian spirituality years ago — Ignatius saw God operating in the midst of the day-to-day, outside of explicitly religious experiences, through the midst of implicit, often boring days as well as the beautiful days.”

Fr. Schenden tries to fill his boring and beautiful days listening to live music on U Street and seeing Rothkos at the National Gallery — in addition to his duties as director of Georgetown’s Campus Ministry.

Like many during the COVID-19 pandemic, Fr. Schenden was cut off from these places that not only brought him joy — but where he encountered the divine. He continued to fill his time with art and music, translating the music he heard to digital art. He wandered Georgetown’s campus, pairing his photos with poetry on Instagram. And he found solace in more simplified prayer.

So while he found new ways to tend to his well-being and spirituality amid the crisis, he welcomed the reopening of museums and music venues last summer.

“Stepping in front of those kinds of paintings puts me in touch with something far greater than myself,” he says. “Same thing with live music — being able to go to the 9:30 Club and see that communal experience of live music is such a powerful part of it, too.”

“You get educated not just so one has a Ph.D. after their name, but for the betterment of humankind.”

The principle of “mind, body, spirit” undergirds the Jesuit philosophy of educating the whole person. Though not unique to the Ignatian tradition, St. Ignatius’ own formational experiences inform the Jesuit focus on the whole person — his body injured by a stray cannonball, his mind developed through a humanist university education, his spirituality marked by a personal relationship with God.

“Why do I have to tend to my own well-being? Isn’t that selfish? Shouldn’t I be tending to everybody else?” asks Fr. Schenden. “No, because if I’m incapacitated somehow in terms of my physical or mental or spiritual or emotional health, I can’t be fully available to other people.”

The motto across the stage of Gaston Hall — Ad majorem Dei gloriam inque hominum salutem (for the greater glory of God and the salvation of humanity) — means not only to seek and find God in all things, as Fr. Schenden finds divinity in art and music, but to work in service of others.

“You get educated not just so one has a Ph.D. after their name, but for the betterment of humankind,” says Fr. Schenden.

Educating the whole person — mind, body and spirit — inspires a culture of care. Fr. Schenden finds hope in Hoyas’ practice of care on the Hilltop and beyond, even at an especially challenging moment in time.

“You’ve been formed here, and you know you have an obligation to the common good in whatever you do,” he said. “And knowing that y’all are in the world doing good brings me hope.” 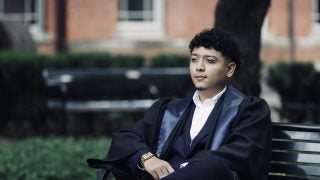 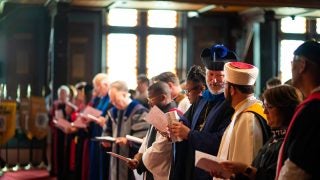