The Founding of Georgetown 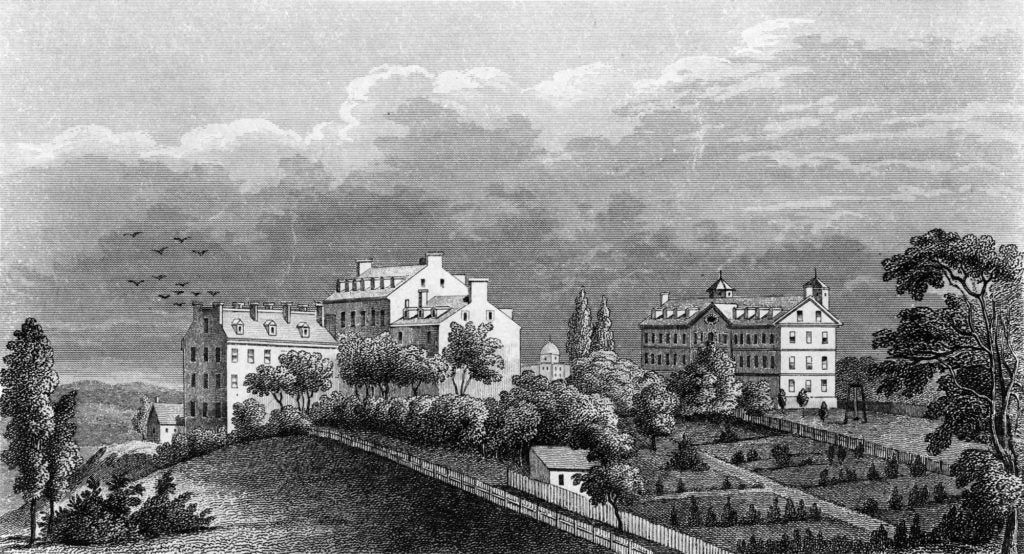 Georgetown University is the oldest Catholic and Jesuit institution of higher learning in the United States. John Carroll’s founding of Georgetown College coincides with the birth of our nation.

Back to Top
Beginnings Anchor 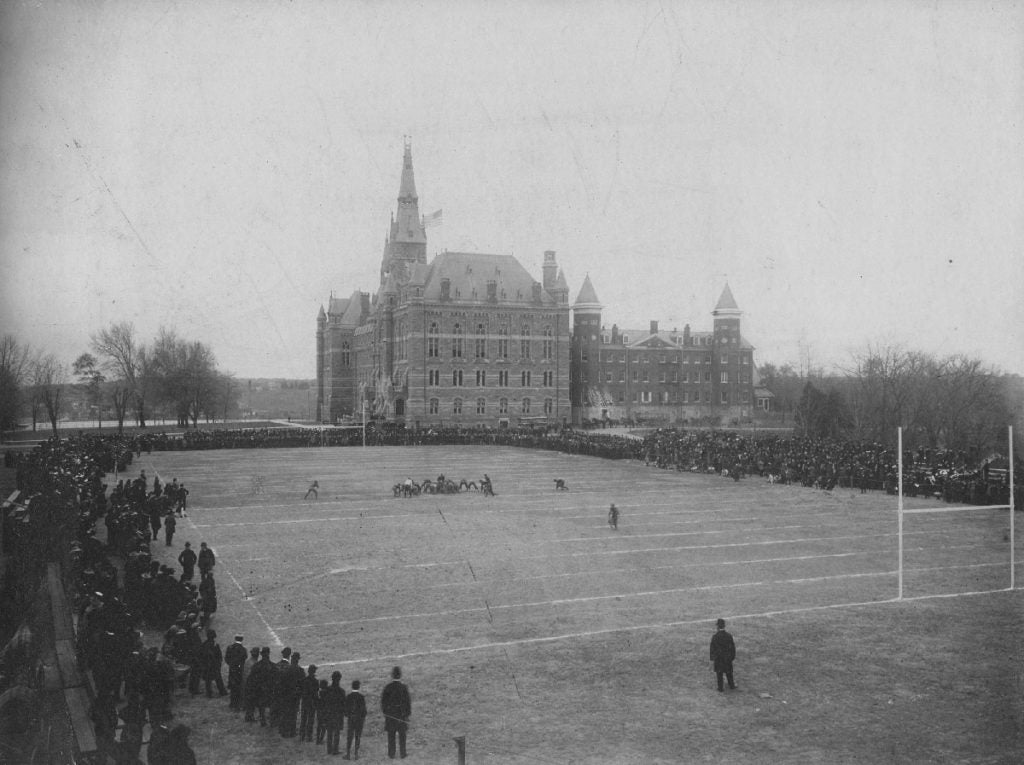 In 1789, Carroll secured the deed to one acre of land on a hilltop overlooking the village of Georgetown. He was appointed Archbishop of Baltimore in 1808.

Classes began in 1792. Within the first year, attendance grew to more than 40 students – some as far away as the West Indies. In 1817, the school awarded its first two bachelor’s degrees.

Back to Top
Blue and Gray Anchor 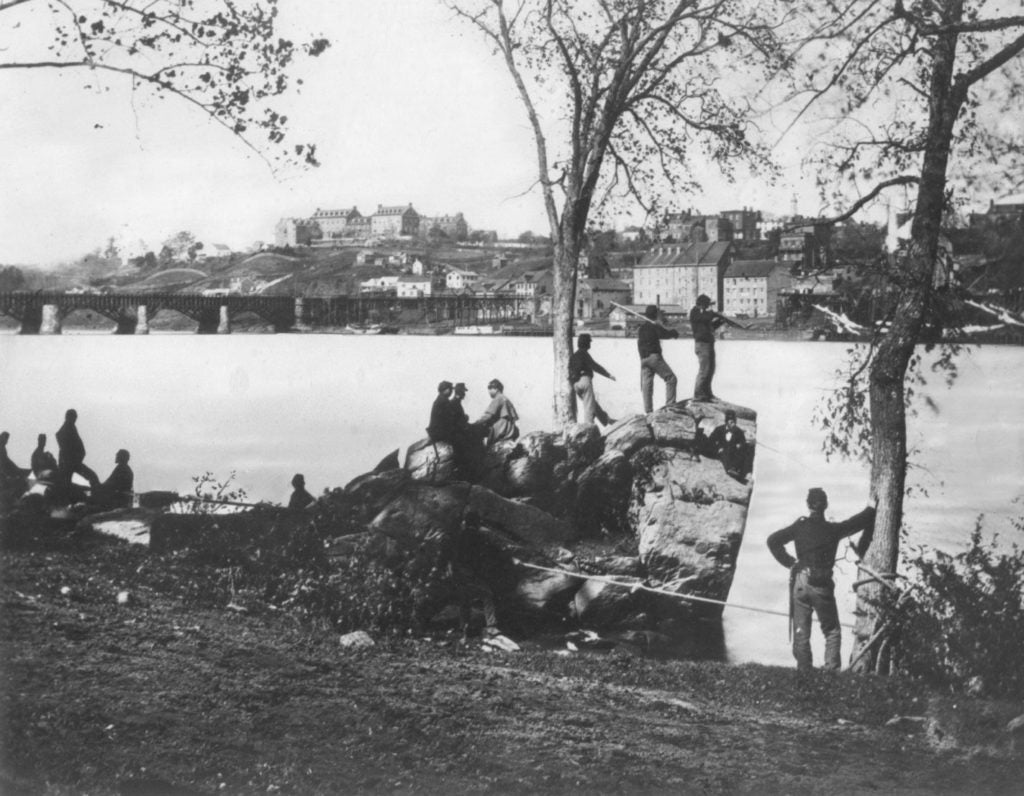 After the Second Battle of Bull Run in Manassas, Virginia, in 1862, several campus buildings were turned into a temporary hospital. To mark the end of the Civil War, Georgetown students selected the colors blue and gray as the school’s official colors in 1876.

Back to Top
Expanding Education Anchor

Georgetown established the School of Medicine in 1851 and the Law School in 1870. Patrick F. Healy, S.J., the university’s president between 1873 and 1882, was the first African American to earn a Ph.D. and the first to head a major U.S. university. Healy dramatically reformed the university’s curriculum with a new emphasis on history and the natural sciences and started construction on the Flemish Romanesque-style Healy Hall in 1877.

Joseph Havens Richards, S.J., president from 1888 to 1898, established graduate courses in the arts and sciences and built new facilities for the law and medical schools. The university’s expansion continued into the 20th century, with the opening of the School of Dentistry in 1901, School of Nursing in 1903 and the School of Foreign Service in 1919 under the direction of Edmund Walsh, S.J. The School of Dentistry closed in 1990.

Back to Top
War and Peace Anchor 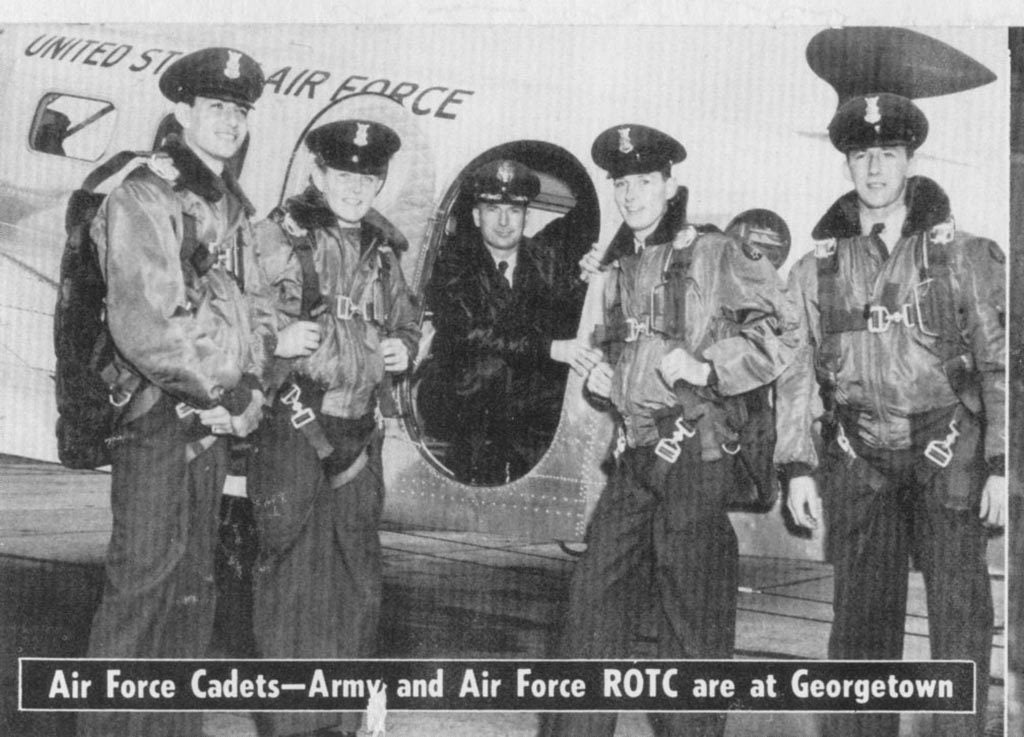 As the new decade of post-war peace and prosperity took off in the early 1920s, Georgetown mirrored the nation’s period of growth prompting the construction of New North, Copley Hall, White-Gravenor Building and the Medical and Dental Building. By 1930, enrollment had nearly doubled, reaching 2,600.

The Great Depression was a period of great consolidation for Georgetown as enrollment fell below 2,000. Despite a time of economic hardship, President Arthur O’Leary, S.J., formally organized the Graduate School in the 1930s, offering programs in mathematics, the natural sciences, economics, history and government.

During World War II, the U.S. War Department designated Georgetown as one of a select number of universities to house the Army Specialized Training Program. More than 75 percent of students enrolled in the 1943-44 academic year were military servicemen. During the 1944-45 academic year, women were allowed to enroll in the School of Foreign Service.

Back to Top
Post-War Era Anchor 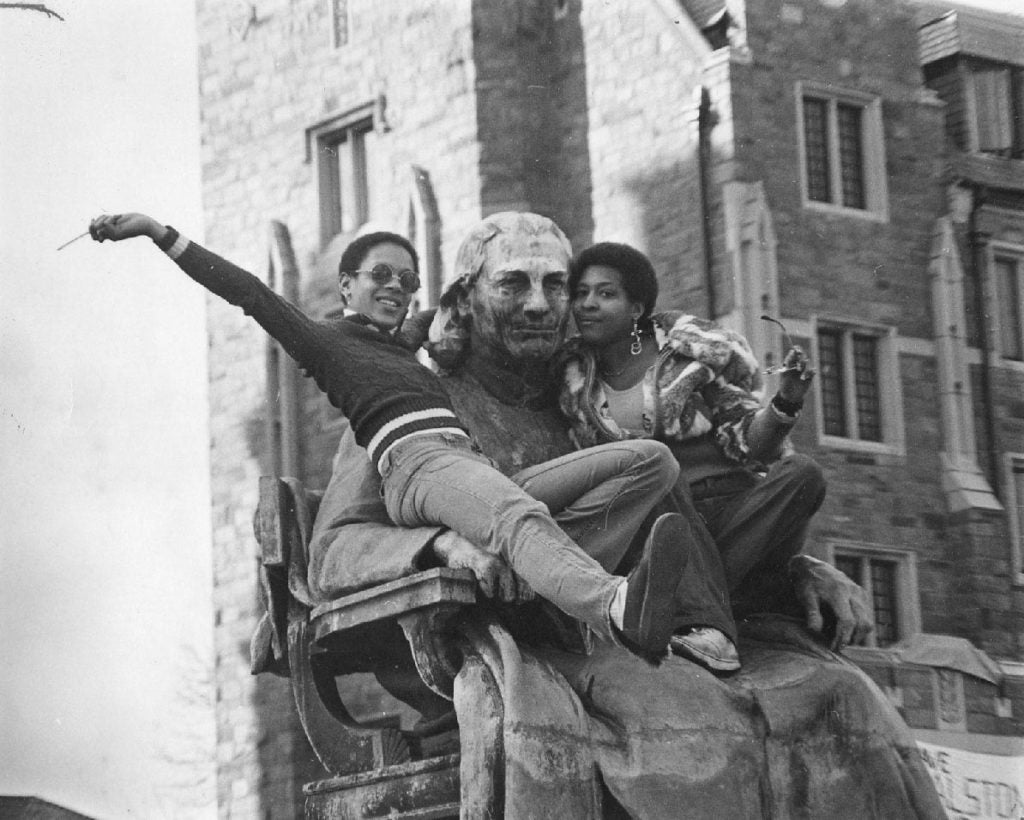 The years after World War II saw another increase in enrollment and expansion of the university. Under the leadership of Edward Bunn, S.J. (1952-1964), Georgetown created the School of Business Administration in 1957, an outgrowth of the School of Foreign Service. Bunn is also responsible for creating the School for Summer and Continuing Education, now the School for Continuing Studies, in the 1950s.

Across the nation, the 1960s were shaped by the emergence of revolutionary ideas and social upheaval. Georgetown students were on campus when the assassinations of President John F. Kennedy, the Rev. Martin Luther King Jr. and presidential candidate Robert F. Kennedy took place. The women’s movement began to take hold, and women were accepted into the College for the first time in 1969.

Students demonstrated against the Vietnam War in the 1970s, causing some disruptions to classes and campus life. By the end of the decade, most of the anger and discontent had been redirected into positive social action. Students started an annual tradition of spending their spring break helping underprivileged communities outside of Washington, DC, a program that Georgetown students continue to take part in.

Back to Top
Tremendous Growth Anchor 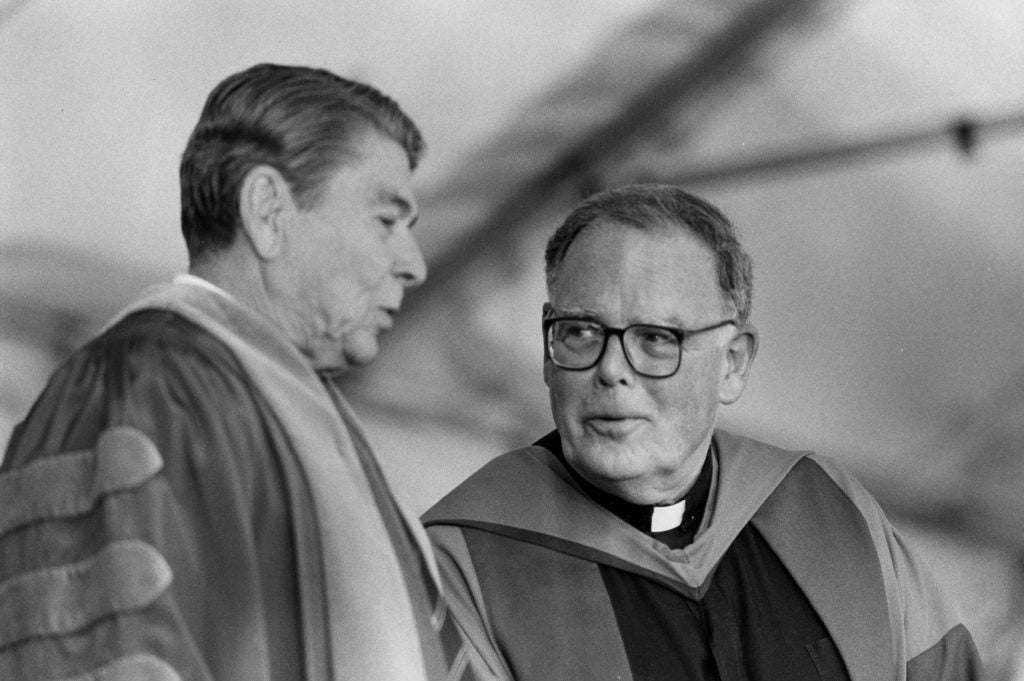 The 1980s were a time of tremendous growth on campus with the completion of Yates Field House and the opening of the Bunn Intercultural Center, new residence halls and the $51 million Thomas and Dorothy Leavey Center for students.

During the university’s bicentennial year (1988-89), U.S. President Ronald Reagan provided the opening address to kick off the yearlong celebration, the culmination of which included a reunion ball with over 3,500 guests at DC’s Union Station. The 1980s also began a “golden age” in two traditional sports at Georgetown – basketball and track. Under coaches John Thompson Jr. and Frank Gagliano, basketball and track enjoyed unprecedented periods of success from the early 1980s well into the 1990s.

Back to Top
Embracing Diversity Anchor 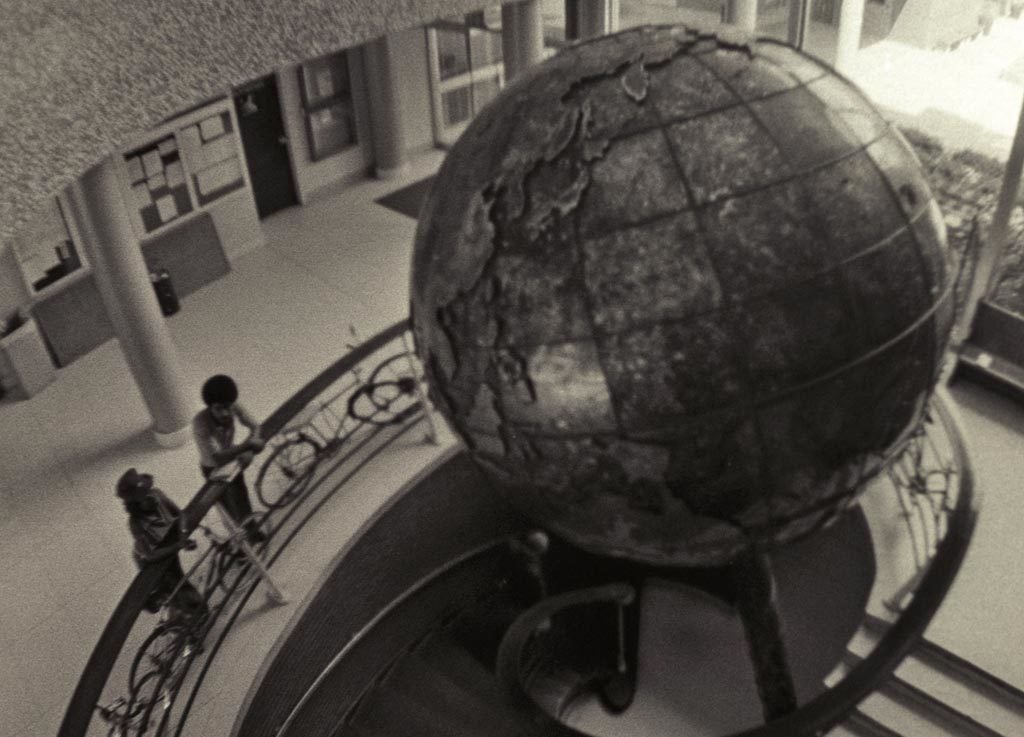 Under the leadership of Rev. Timothy Healy, S.J., (1976-1989) and Rev. Leo O’Donovan, S.J.,(1989-2001) Georgetown saw significant increases in the diversity of its students and faculty, and the number of faculty positions as it grew from a regional school to one of national prominence. Women also greatly increased their numbers within the faculty during the 1990s – making up nearly 40 percent by 2001. O’Donovan also oversaw the restructuring of the Medical Center and the separation of the hospital from the medical school. In 2001, John J. DeGioia became Georgetown’s 48th and first lay president.

Back to Top
Georgetown Today Anchor 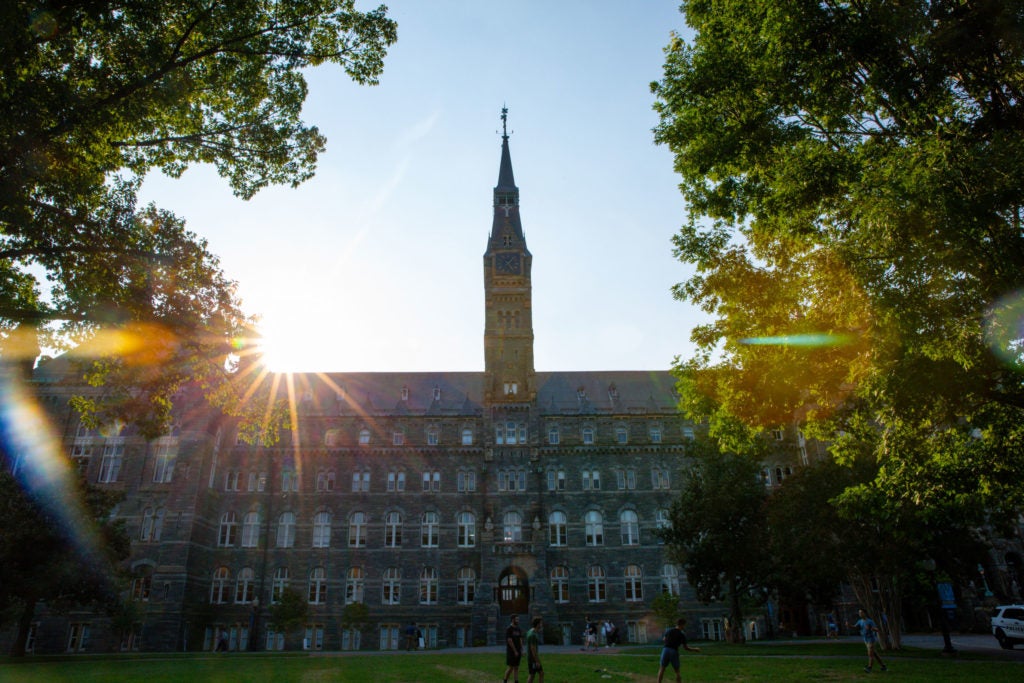 Georgetown has grown to be a major international research university with nine schools, an affiliated hospital and many highly ranked academic programs. Today, the university has more than 12,000 undergraduate and graduate students who take classes at five locations: Main Campus, Medical Center, Law Center, School of Continuing Studies and the university’s Georgetown Qatar campus.