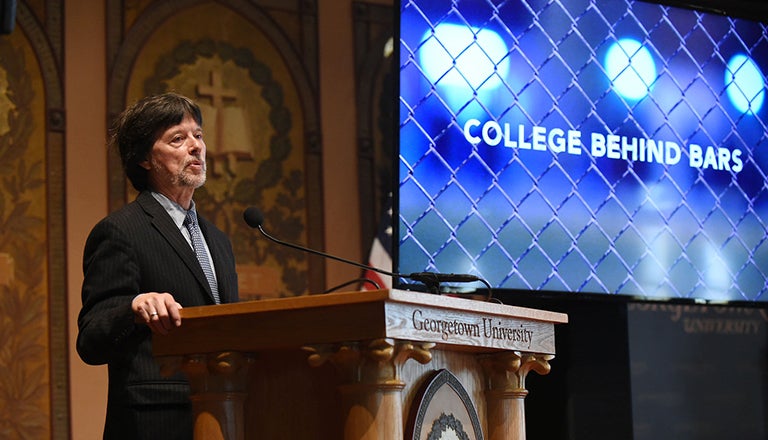 Ken Burns’ new film series College Behind Bars dovetails with the work faculty and students are doing at Georgetown.

Award-winning filmmaker Ken Burns came to Georgetown yesterday to talk with university leaders, faculty and students about the power of education and the use of narrative to address critical societal issues.

Burns and Georgetown have had an extended engagement over the last decade and are exploring how to deepen the relationship.

“I’m terrifically thrilled that we might test the waters on what it might be to think about complex issues together,” Burns said at a March 11 event sponsored by Georgetown and The Better Angels Society.

At a public gathering, Burns introduced his colleague Lynn Novick to debut screen clips from a new documentary series, College Behind Bars, which chronicles the lives of a dozen incarcerated men and women as they struggle to earn degrees through the Bard Prison Initiative (BPI).

College Behind Bars is Novick’s solo directorial film, which was executive produced by Burns and produced by Novick and Sarah Botstein. 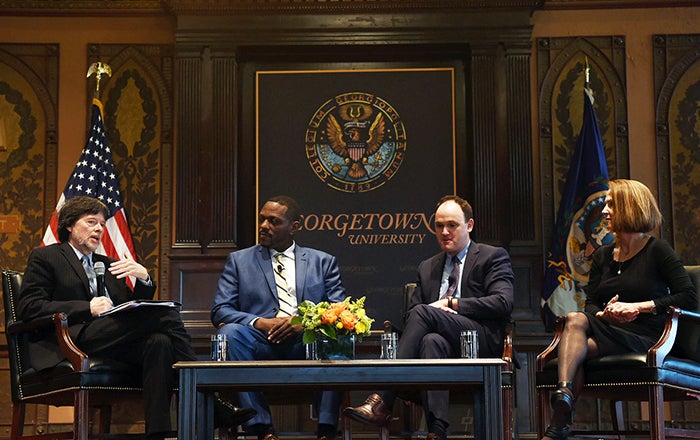 Earlier in the day, Burns met with undergraduate and law students to discuss the power of narrative.

Anne Marie Hawley (C’19), an English major and film and media studies minor in Howard’s class, had the opportunity to ask Burns a question about narrative.

“I think I speak for a lot of people my age when I say that so much of my understanding of history growing up came through his film work,” says Hawley, who says she came to Georgetown to explore the intersection of ethics and documentary film. “To have one of the foremost filmmakers in that space give his two cents on how those things intersect ethics and storytelling and narrative – was just such a highlight and kind of a capstone experience for me in my last semester.” 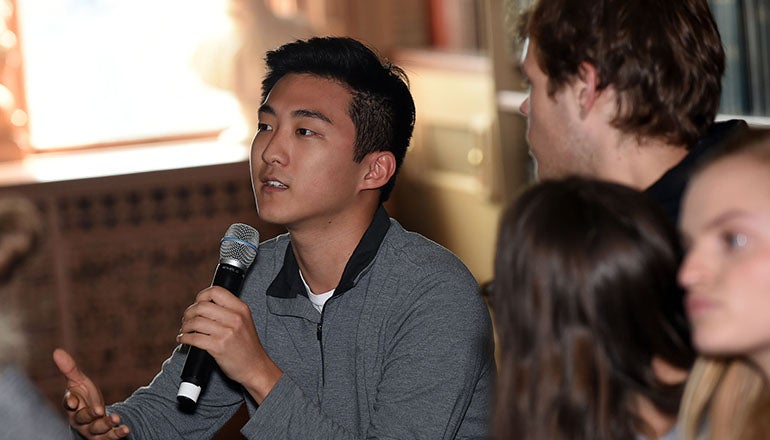 Georgetown has addressed the problem of wrongfully incarcerated individuals as well as educating inmates while they are in prison and after their release through such efforts as its Prison and Justice Initiative, the Georgetown Prison Scholars Program at the DC Jail, a Prison Reform Project course, its custom paralegal program for returning citizens and its Pivot Program.

Last year, the work of students in Georgetown’s Prison Reform Project course helped free Valentino Dixon, who had been wrongfully convicted and served in jail for 27 years before he was released this past September.

The Burns event also included President John J. DeGioia hosting a panel with Howard and Hopwood, as well as Brian Ferguson (C’18), now executive director of the Mayor’s Office on Returning Citizens Affairs, who was wrongfully convicted and spent 11 years behind bars.

Ferguson will soon pursue a master’s degree at Oxford with a Marshall Scholarship. 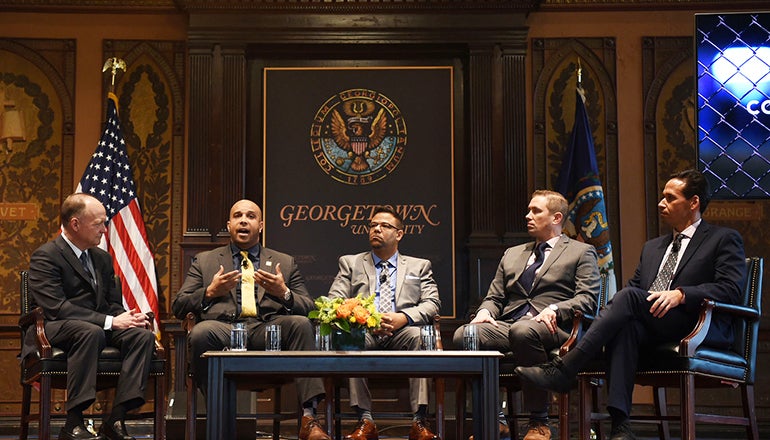 Also on that panel was Georgetown Pivot Program Director George Chochos, another returning citizen, who earned his associate and bachelor’s degrees through the Bard Prison Initiative.

For Chochos, who later earned advanced degrees at Yale Divinity School, it was a philosophy course he took while in New York State Prison.

“It was in that class that I began to see myself as an intellectual, that somehow what I had to say, that my scholarship, that my voice can have meaning, that there was something that somehow my life could add value to society,” 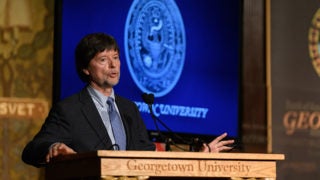