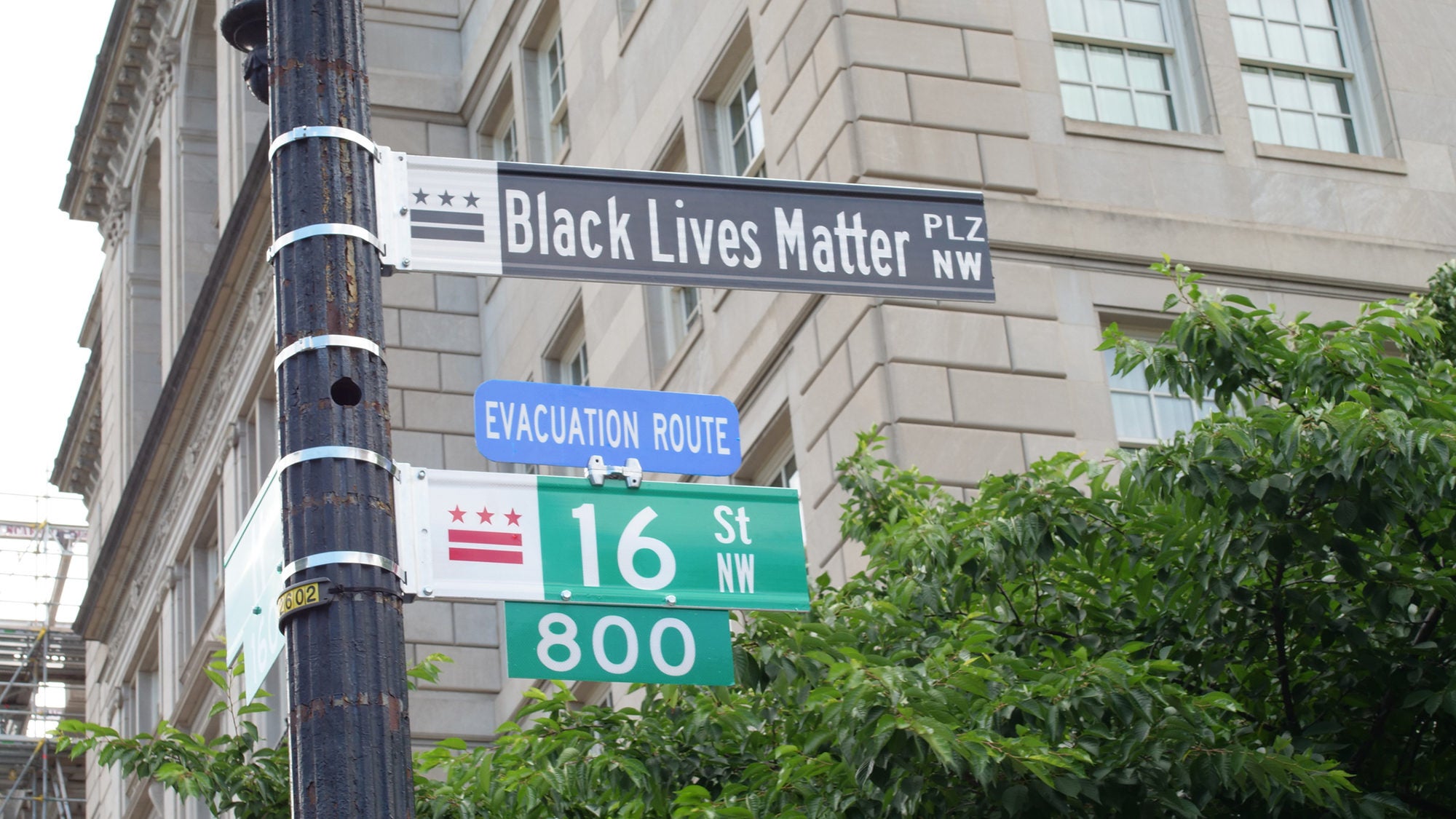 The pandemic and its disproportionate effect on Black people combined with new acts of violence against them have created deep pockets of pain in the university’s Black community.

“The past eleven weeks have been some of the hardest I have had to face in my lifetime,” said Adanna Johnson, associate vice president of student equity and inclusion.

“I suspect the same is true for many of my students and colleagues,” she said. “I want to extend particular care and concern for the Black and African American members of our community. I see you, I value you.”

The Office of Student Equity and Inclusion leader said she felt heartbroken.

“My years of teaching about culture and bias have led me to merely perseverate on the idea that the time to act is now,” Johnson said. “A statement or public acknowledgment of racial hatred and terror is only as good as the actions which follow – actions rooted in anti-racist, culturally aware and justice-oriented.”

More Than One Virus

The recent killing of George Floyd and countless other unarmed Black people has spurred university teach-ins and forums with faculty and national experts, faith leaders and others who support the fight for racial justice.

At a recent Georgetown forum, Archbishop Wilton Gregory of Washington equated racism to the pandemic.

“We’re very much concerned, as well we should be, with the coronavirus,” he said in a June 5 virtual event led by Georgetown’s Initiative on Catholic Social Thought and Public Life (CST). “How did it develop? How is it passed on? Is there a response that will protect us?”

“Those are exactly the same questions that we need to ask about racism,” said Gregory, the only African American archbishop in the United States. “How is racism – this silent but deadly virus – passed on to other people? Is it learned at home? Is it transmitted through our structures? Is it a part of the air that we breathe and how do we find a vaccine? How can we protect ourselves? How can we render it ineffective?”

The public dialogue with Gregory, called “Racism in Our Streets and Structures: A Test of Faith, A Crisis for Our Nation” was aired on CSPAN and viewed by people all over the world, including religious leaders at the Vatican. 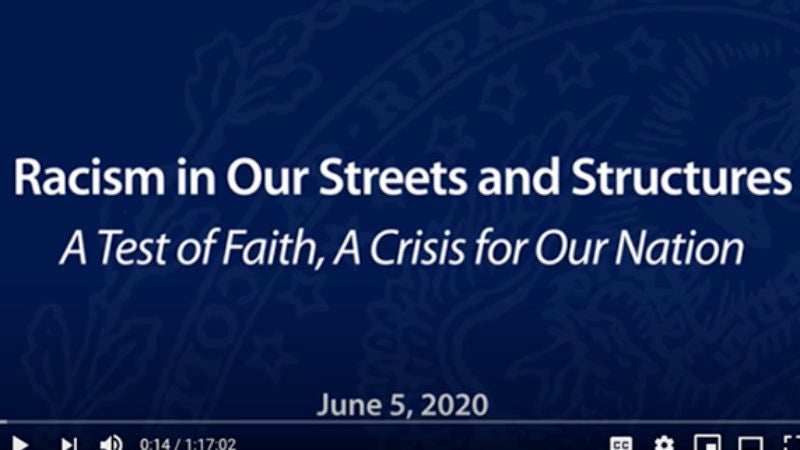 Chatelain expressed concern that incidents of police brutality, as well as inequities in other sectors for Black people, may continue unless there is radical, systemic change.

“My last book was about the past 50 years of state failure in Black communities,” said the author of Franchise: The Golden Arches in Black America ( Liveright, 2019). “And if you go back a hundred years and you look at the right conditions of 1919, what are Black people saying? Police brutality, not enough jobs, poor schools for our kids, lack of health care, terrorism by our white brothers.”

“And so if we’ve had a hundred years to learn this lesson, I don’t know what will make this moment different.”

President John J. DeGioia wrote in a May 31 message to the Georgetown community that the deaths of Black Americans at the hands of police “once again present our country – and each one of us – with the imperative to confront the enduring legacy of slavery and segregation in America.”

“Our role in society – to pursue the truth – through the methodologies and disciplines through which we establish knowledge in our world, demands our engagement,” he wrote. “… We also know that the very ideas of race and subsequently of racism are social constructs, the product of early American scholarship, developed and nurtured in order to justify the institution of slavery.”

Their book, The Psychic Hold of Slavery: Legacies in American Expressive Culture (Rutgers University Press, 2016) is as relevant as it was when they began to think about it in 2014, they said.

“We were struck by the coincidence of having the first Black president and also having [an increase] of killings, including the death of Trayvon Martin and many others …,” Colbert recalled during a June 4 virtual presentation with Patterson to Georgetown alumni.

“The conversation we were trying to stage, which was really about how our current moment was related to the history and legacies of slavery, I think has even more resonance, obviously … in regard to the past nine days and certainly the past three-and-a-half years,” said Colbert, who is also vice dean of faculty and the Idol Family Professor in Georgetown College. 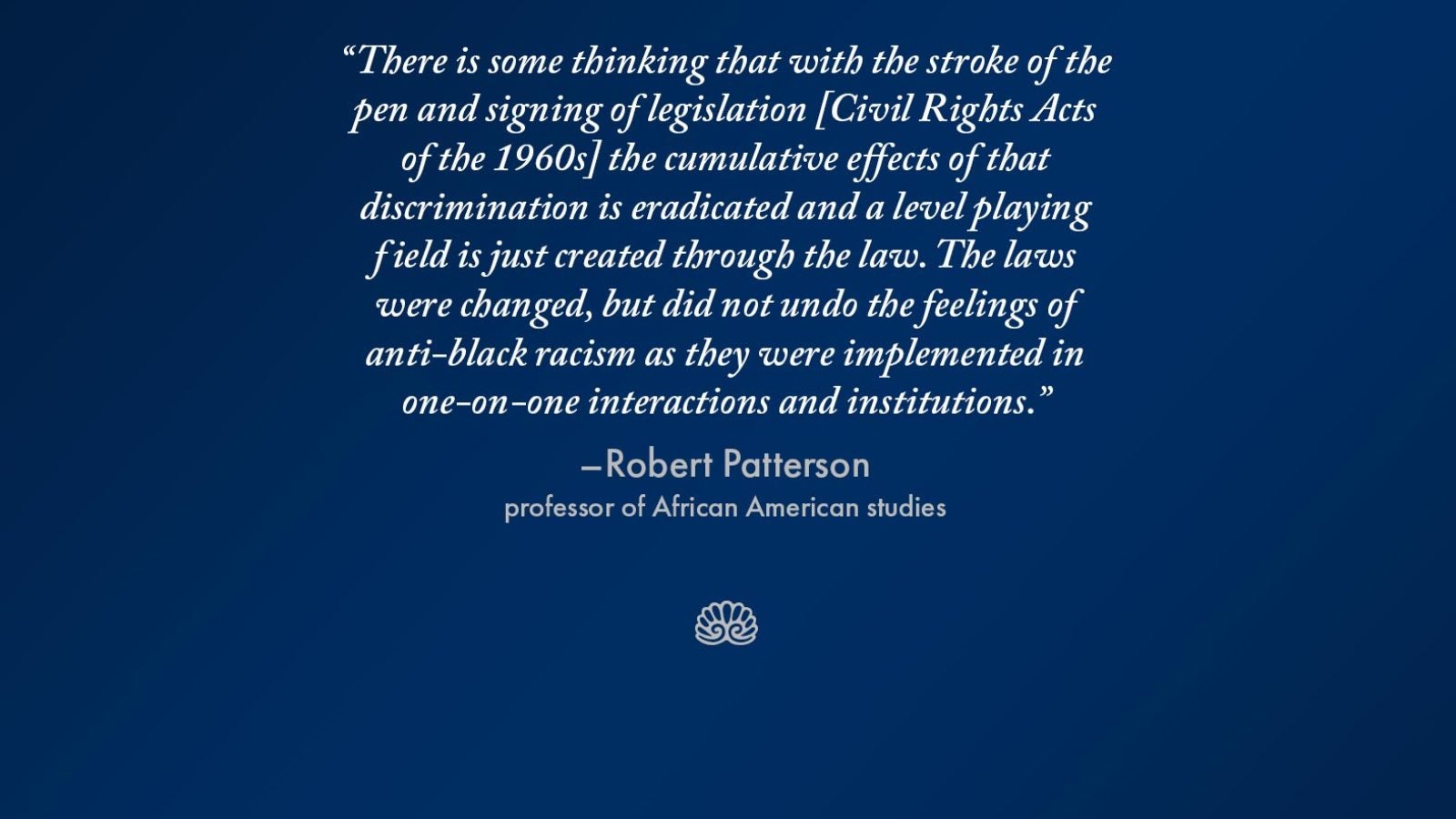 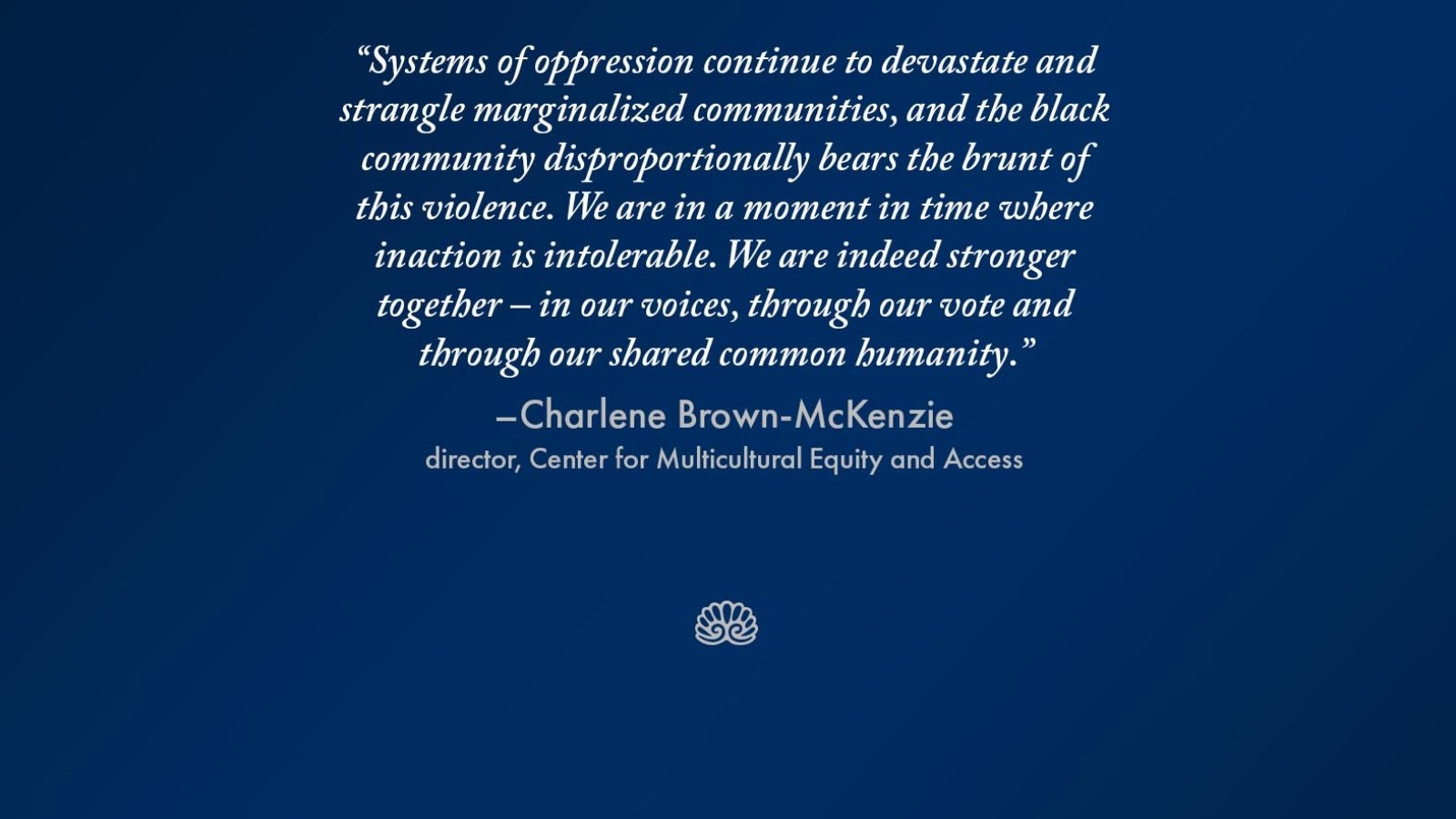 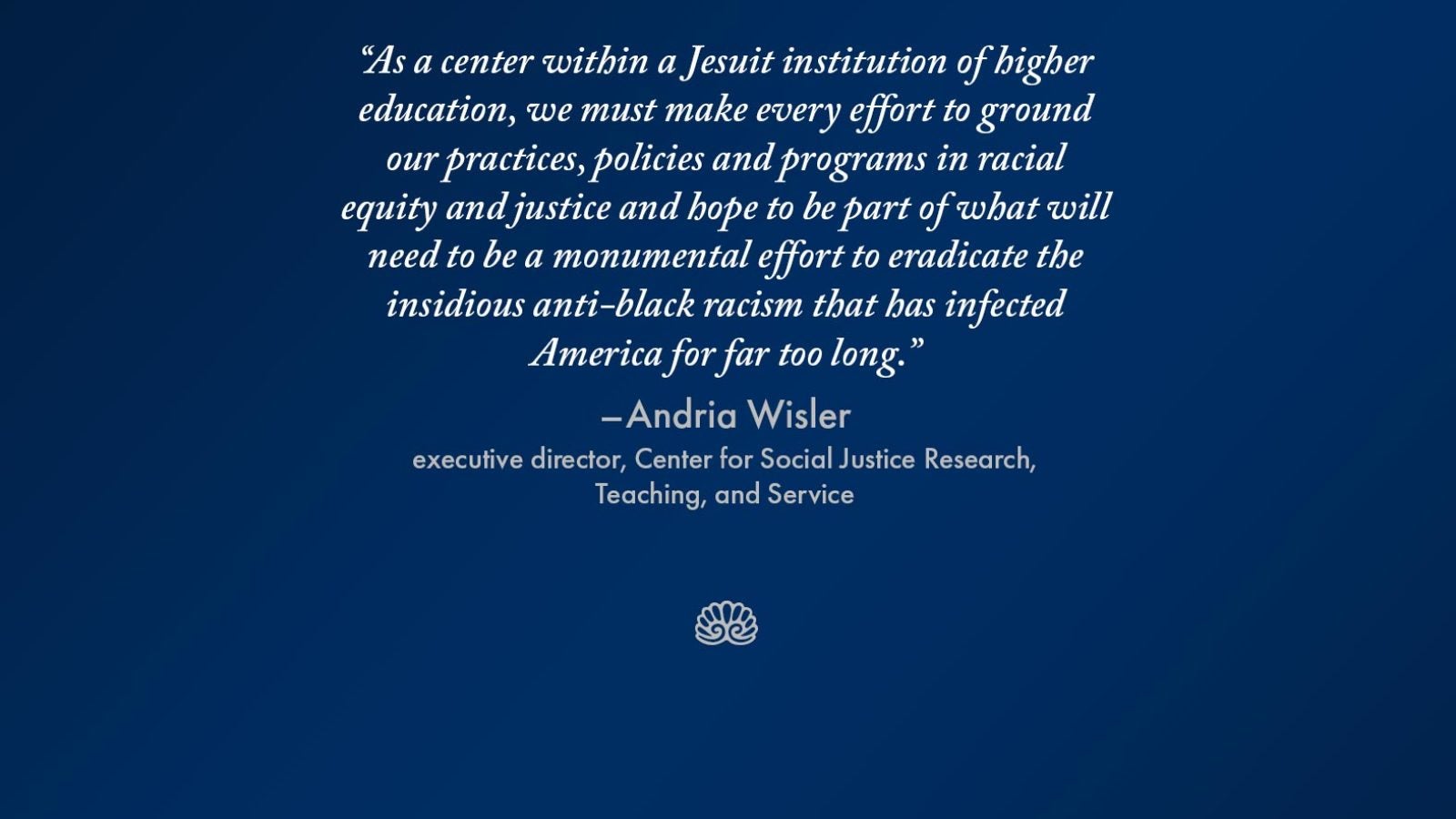 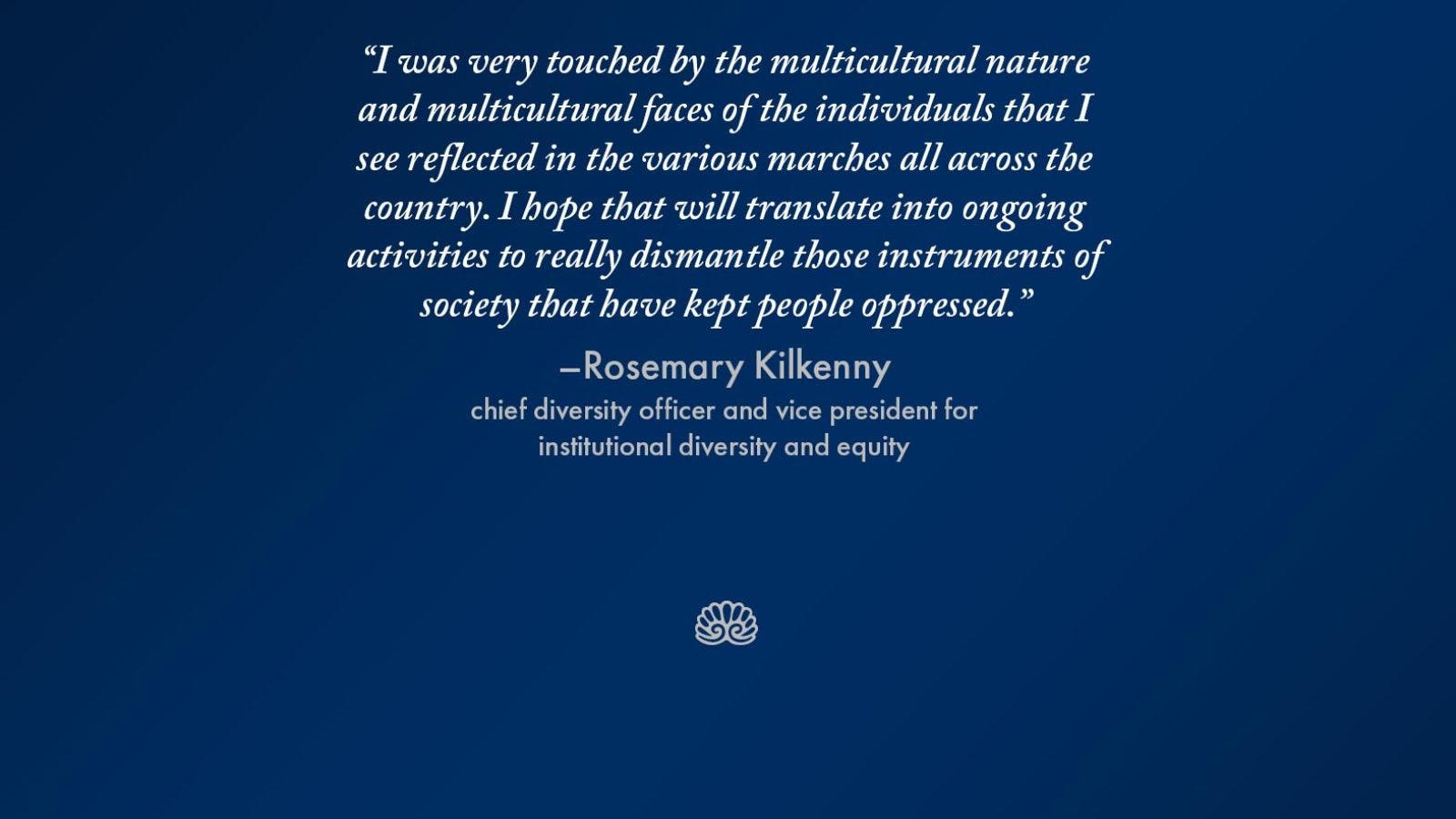 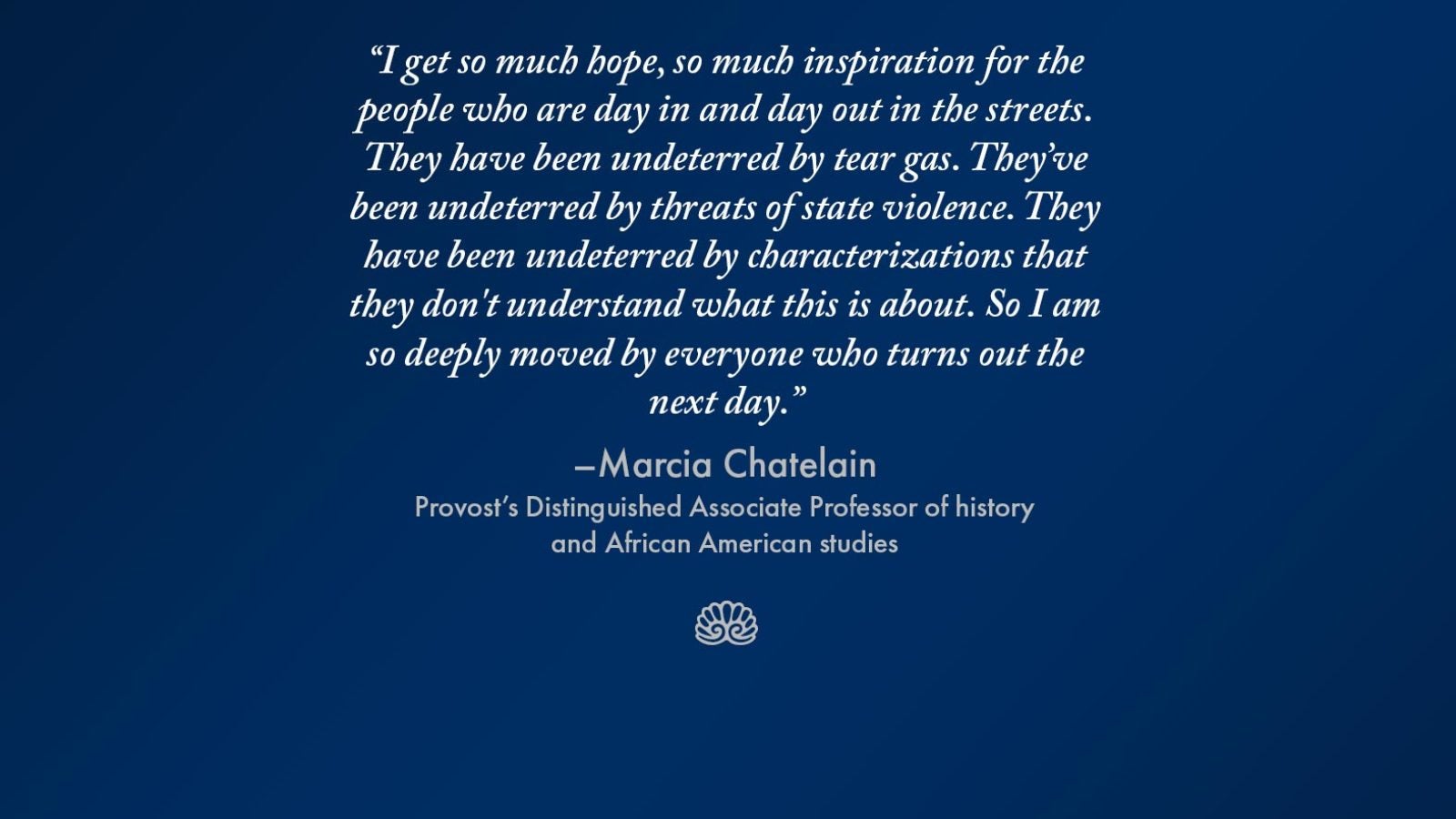 The authors also participated in a Georgetown College virtual “Teach-in” last week – “From COVID to Minneapolis: Structural Racism in America.”

Robinson said gentrification is something that should actively be thought of as a form of violence.

“Black individuals are being pushed out of their home cities like Washington, DC, which has turned from a chocolate city to a latte city,” says Robinson. “This is something we are seeing across the country.”

Andria Wisler, executive director of the Center for Social Justice Research, Teaching, and Service (CSJ), said the center is renewing its efforts to fight for racial justice.

“We will deepen our commitments – in collaboration with students, faculty and staff at Georgetown – to engage in the cause of racial justice in Washington, DC and beyond through advocacy, activism, new avenues of research and teaching, as well as community-based learning,” she said.

There are more conversations to come.

A recently announced university-wide series on “Conversations About the Unfinished Business of Race in the United States of America,” for example, will cover such topics as the impact of gentrification in Black communities, income equality, health disparities, equal justice, and whether redlining is a relic of the past.

The series, which will begin later this month, will include Georgetown faculty, staff, students and national experts.

“At Georgetown, we are strongly committed to building a supportive, compassionate and informed community based on our Jesuit ideals and commitment to social justice,” wrote Rosemary Kilkenny (L’87), chief diversity officer and vice president for diversity, equity, and inclusion, in announcing the series with Provost Robert Groves. “It is our priority to exemplify and promote a diverse community inclusive of talents, interests and backgrounds for the common good, and to use respectful dialogue and points of commonality in areas of disagreement.”

Students have participated in protests as well as sponsored their own conversations.

Kilkenny says conversations are important but are at the same time not enough.

“All of us – Georgetown Law, the Medical Center and Main Campus – are engaging in conversations,” she added, “but at the end of the day, what are we going to do? How do those conversations translate into concrete action steps that the university could be taking to begin to remove some of the barriers that people feel are keeping them from fully realizing their potential?” 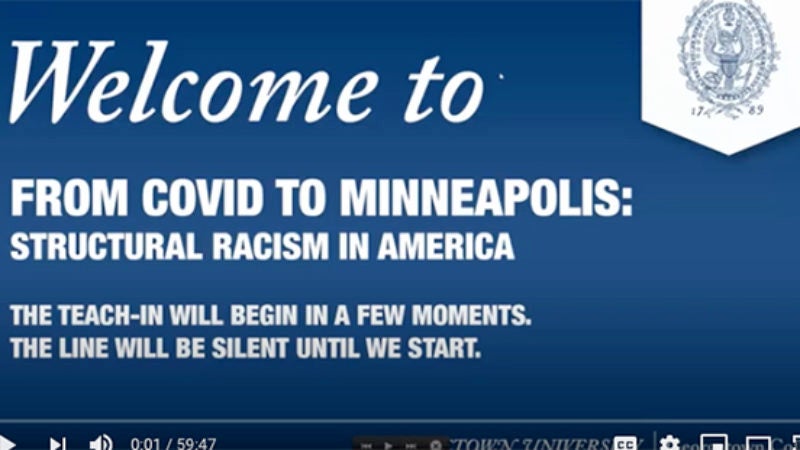