Georgetown’s new Core Pathways Initiative is giving undergraduates the opportunity to address some of the world’s most complex problems while meeting their core undergraduate requirements.

Georgetown’s new Core Pathways Initiative is giving undergraduates a chance to address some of the world’s most complex problems while meeting their core undergraduate requirements.

The university’s Designing the Future(s) Initiative launched the Core Pathway on Climate Change (CPCC) as a pilot program last year.

“A core curriculum shouldn’t just be about checking boxes and getting it out of the way,” says Randall Bass, vice provost for education and director of the Designing the Future(s) Initiative. “We are modeling what it looks like to take up an ethical question or to take up a complex problem from multiple different perspectives – and to do this as early as possible in a student’s career at Georgetown.”

Each student in the pilot program takes two complementary 1.5 credit courses per semester to meet their requirement goals. 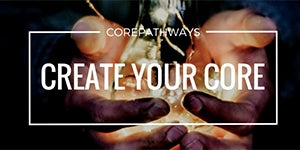 Core Pathways is based on the idea that some issues are so complex that they require a number of different disciplines to address them.

About 100 students so far have pursued core and elective requirements in the sciences, theology, history, the humanities and philosophy through a climate change lens. 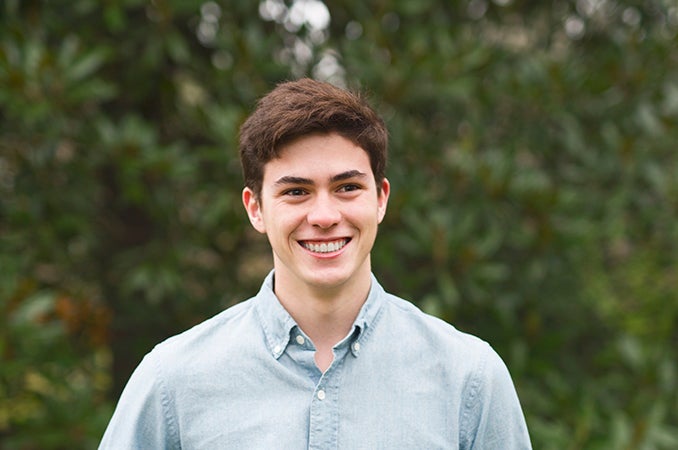 Robert Kyte (SFS’20) of Ruston, Louisiana, for example, took a course with Dagomar DeGroot, assistant professor of history and author of the recent book, The Frigid Golden Age: Climate Change, the Little Ice Age, and the Dutch Republic, 1560-1720.

“I believe that Georgetown is sending a really powerful message to its students and the world because the university is centering its core requirements, classes everyone has to take, on the global problem of climate change, proving that we are an institution dedicated to improving the global good,”Kyte says.

DeGroot, co-founder of the Climate History Network, says students benefit from the CPCC by “learning that different academic disciplines all provide unique perspectives on climate change.”

Students in DeGroot’s module wrote articles for the Tipping Points Project, a digital initiative that seeks to raise awareness about the consequences of climate change for local communities.

By congregating in “integrative days,” DeGroot notes that students are encouraged to talk about the different disciplinary perspectives they’ve learned and gain access to global climate leaders.

Former Vice President Al Gore, for example, met privately with CPCC students and faculty before a campus speaking engagement in Gaston Hall this past April. 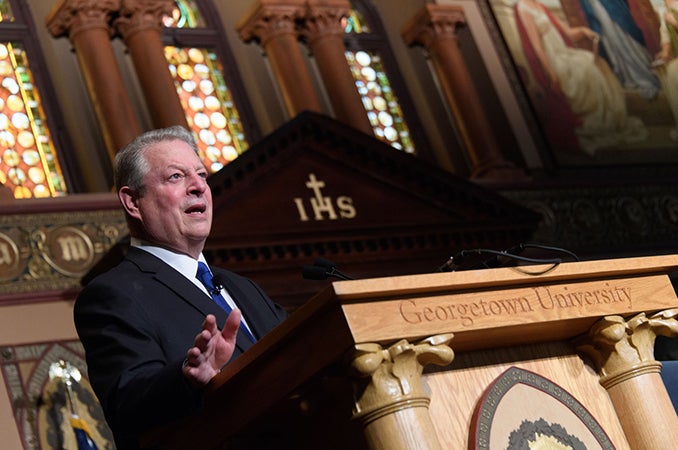 “I’m grateful to be involved in such an important initiative,” says Isabel Paret (C’20), a government and Spanish major of Larchmont, New York. “It’s cool to be a part of something so transformative to Georgetown’s traditional curriculum, but also something with such weighted themes.”

All the students in the program engage in issue-based simulations, have opportunities to address public policy and advocacy, attend events and participate in a robust community of practice comprising faculty, staff and peers.

“After graduation Georgetown students often go on to serve as leaders not only in the corporate or political worlds, but also in their communities,” DeGroot notes. “I believe that students in the CPCC will be well positioned to help our world overcome climate change.”

CPCC will be open to students again this fall and more core pathways themes are under development.

Randall Amster, CPCC’s director and faculty coordinator, notes there is a “plethora of wicked problems confronting us today, from climate change to endemic poverty and inequality to emerging challenges with technology.”

“Core pathways allows us to bring the collective expertise of the university to bear on today’s most pressing concerns in a multidisciplinary, dynamic manner that balances critical inquiry with constructive innovation,” he says.

As with all programs coming out of Designing the Future(s), the Climate Change Core Pathway, initiated with a gift from former Georgetown board of regents member Gabriela Smith, is funded entirely by philanthropy.