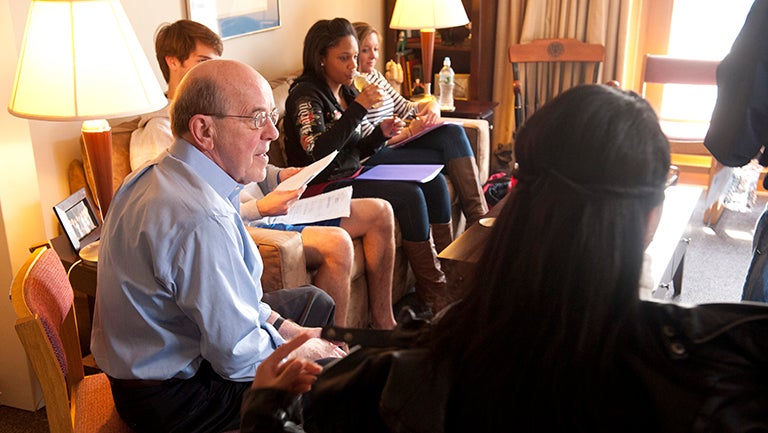 Tens of thousands of students have been influenced by Georgetown’s signature course, The Problem of God.

Despite a dozen years of Catholic schooling, alumnus Rev. Scott Pilarz, S.J., says it wasn’t until he took the Problem of God in his freshman year that he felt “challenged to take ownership of my own relationship with the transcendent, with God.”

As Problem of God celebrates its 50th year, Pilarz is just one of tens of thousands of students who have been influenced by what has become the university’s signature course.

“Otto led us through a process of making meaning,” says Pilarz (C’81) of theology professor Rev. Otto Hentz, S.J., who taught the course for 43 years. “I could not have named it at the time, but looking back I know now that it was my first Ignatian moment. Otto was inviting us to find God for ourselves – thirty-five years later I’m still grateful.”

Pilarz, president of Georgetown Preparatory School, will begin serving as president of the University of Scranton for the second time in July 2018.

“Part of a liberal arts education is to get into the basement and address fundamental human questions,” Hentz says of the course he began teaching in the 1973-1974 academic year. “And there’s no more direct way to do that than taking up the question of God and the possibility of religious experience.”

The course is designed to introduce students to different religious traditions and perspectives and to encourage critical reflection on challenging questions relating to religious commitment.

While there are no statistics available before 1977, between the fall of that year and the spring of 2017, there have been 1,629 sections of the course taught to more than 53,000 students.

Caroline Cotto (NHS’14), who took the Problem of God course with theology professor Erin Cline, says it helped her understand that “religion and spirituality are contextual and able to be expressed in a variety of ways.”

“The Jesuit values have becomes a crucial part of my identity as I navigate the world post-Georgetown, and I think Problem of God was a fundamental part of instilling them in me from my first week on campus,” says Cotto, who now works for a tech company in Boston. “Even if you don’t subscribe to the traditional Holy Trinity definition of God, there is extreme value in starting your Georgetown career under the understanding that we are all part of a larger whole working towards a singular mission of making meaning in the world and deepening our relationships with one another.”

Cline, who began teaching at Georgetown in 2009, says the Problem of God captivated her from day one.

“What I loved right away is that I get to teach a wide range of texts and traditions in the course,” she says.

Trained in classical Chinese texts and comparative religion, Cline divides her Problem of God course into three parts – whether God exists, whether God is always central to religious life and challenges to faith and responses to them.

She begins by introducing students to classical arguments for God’s existence in the Christian tradition, looking at works by St. Thomas Aquinas, Anselm, William Paley and others, then moves into Hinduism, Confucianism and Daoism, Augustine’s confessions, the challenges of the problem of evil and religious pluralism, concluding the Jesuit tradition.

Fans of the course also include actress, screenwriter and film producer Brit Marling (C’05) and film director and screenwriter Zal Batmanglij (C’05), most recently the creators of the Netflix series The OA.

In an interview early this year with The Atlantic, Marling talked about the course as part of the series’ inspiration.

“One of the interesting things about Georgetown, where Zal and I went to school, is that one of their required classes is called The Problem of God,” she told Atlantic’s Spencer Kornhaber. “It’s a very broad overview of all the religious texts – the Bible, the Koran, Buddhist principles. I think that’s a beautiful requirement because I’m not sure that theology would have necessarily been something I gravitated towards …”

Each professor teaching Problem of God takes a different approach to it. Theology professor Frederick Ruf has been teaching the course since he came to Georgetown in 1988.

Students in his section of the course read works by Paul Tillich, the German-American Christian existentialist, Friedrich Nietzsche and other authors.

“I want the students to understand what religion is,” Ruf says. “I want them to seriously engage with some really, really great theories about religion, and to work at understanding them, sorting through them and then to make good judgments about which theorists make the most sense for them.”

Ruf says when seniors are asked about the highlights of their undergraduate experience, they talk about the Problem of God course.

“More than any other class, people have real affection for teaching and taking it,” he says.

Ben Cote (C’05), now a lawyer in Washington, D.C., says Ruf was one of his favorite professors and that the two have stayed in touch over the years.

“In Professor Ruf’s Problem of God course I wrestled with notions of faith and sacredness, read an account of the Santeria and reflected on the discomforting silence of the Vietnam War Memorial,” Cote says. “The course was both personal and – to use one of his words – bewildering. I found it a perfect start to my Georgetown education.”

The course took its inspiration from the work of John Courtney Murray, the well-known theologian known for his efforts to reconcile Catholicism and religious pluralism and the post-Vatican view of teaching religion.

Murray was asked by the Maryland Province of the Society of Jesus in 1940 to design a college theology curriculum for lay people, and later gave a series of lectures at Yale in the early 1960s on “The Problem of God Yesterday and Today.”

The theology program at Georgetown became a department around this time, and John L. Ryan was one of its first chairs. 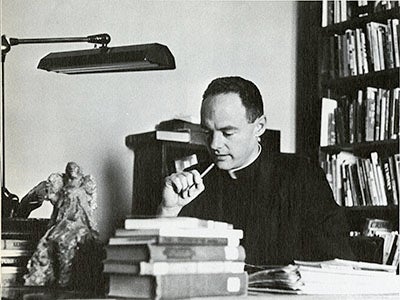 In an essay by now-emeritus theology professor Rev. William C. McFadden, S.J., in Georgetown at Two Hundred: Faculty Reflections on the University’s Future (Georgetown University Press, 1990), McFadden says Ryan “expressed his conviction that students should be encouraged to exercise their freedom to raise questions and pursue them as questions until they arrived at some conclusion, for they are the ones who are ultimately responsible for their faith.”

Hentz and other Jesuits and non-Jesuits went on to teach the course, now taught by nearly 30 professors at Georgetown.

Theology professor Joseph Murphy recalls when he was first asked in the fall of 1983 by McFadden to teach the course.

“I quickly told him that I would be delighted,” Murphy recalls. “I was a recent Ph.D., and the chance to teach at Georgetown was a heaven-sent opportunity. Yet after I hung up the phone I began to wonder – what the heck was ‘The Problem of God?’ The grammar alone was disturbing – whose problem was it?”

“But I went ahead on the assumption that this is somehow our problem of, or even with, God, and I’ve learned to love the title and the course that goes with it.”

“The Jesuit values have become a crucial part of my identity as I navigate the world post-Georgetown, and I think Problem of God was a fundamental part of instilling them in me from my first week on campus.”