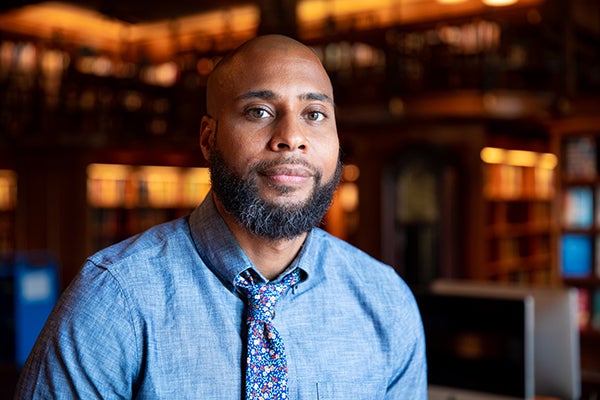 For the first time ever, DC Jail students had the opportunity to take Georgetown’s 50-year-old, beloved Problem of God course.

The course, taught in many variations at the university since the late 1960s, introduces students to different religious traditions and perspectives and encourages critical reflection.

Through the university’s groundbreaking Prisons and Justice Initiative, Georgetown postdoctoral researcher Alphonso Saville taught a credit-bearing version of the course – The Problem of God and American Slavery – to about 27 students at the jail over the summer.

“I’ve taught at high schools, middle schools, Ivy League schools and HBCUs, and this is by far and away my most enjoyable teaching experience,” said Saville, the Andrew W. Mellon Postdoctoral Fellow for the Study of American Religion and Slavery in Georgetown’s theology department.

“Nothing else has been even a close second,” he added. “They are really curious, really engaged.”

The course was part of the Georgetown Prison Scholars Program at the DC Jail, which this semester includes two credit-bearing courses, The Problem of God and American Slavery, and Comparative Politics, in addition to seven non-credit courses and a weekly lecture series.

Saville will teach the course to Georgetown undergraduates in the fall.

His version of Problem of God looked at how debates involving pro-slavery advocates and abolitionists in the early 19th century shaped and informed theological discussions about the nature of God, religious experience, public life and social justice.

In one of the classes, DC Jail students clad in orange jumpsuits listened carefully as Saville talked about one of the main historical “justifications” for slavery.

It’s a passage in Genesis 9 in which Noah curses Ham’s son, Canaan: “May he be a servant of servants shall he be unto his brethren.”

“American Christians utilized that particular passage from scripture to suggest that God ordained the enslavement of black people,” said Saville, adding that Ham was associated with African lands and can be translated as “burnt face.”

“One of the most impactful things I’ve learned from taking this class is the role religion played in slavery and a lot of the atrocities,” he said. “Religion is supposed to be good, but the roles that it played … there was so much bad.”

“Everybody came from these the same two people (Adam and Eve) – how are we missing that part?” Hoffman asked.“Everybody has a brain, everybody has a heart, but these groups and categories that we put ourselves in, that separates us.”

Saville engaged the class in exploring the student’s comments.

“I think what your comment is pointing to is on the ways that we attempt to resolve the problem of God in American society,” he said. “Where do we find common ground? How does theology enable us to establish common ground as human beings?”

Students in the course read works by Frederick Douglass and Nat Turner, as well as selections from the Georgetown Slavery Archive, Solomon Northrup’s Twelve Years a Slave: Narrative of Solomon, Jessica Millward’s Finding Charity’s Folk: Enslaved and Free Black Women in Maryland and other material.

“I’ve gotten a lot out of this class, especially the depth of what women can do,” said DC Jail student Kristina Collins. “I told my dad that one reason I wanted to study religion in depth was because I couldn’t understand how God would approve slavery.”

“That’s why this class has been awesome, because it’s like putting it together, and I don’t think God said it was OK,” she added. “I think people justified it to each other.”

Saville is no stranger to the plight of the incarcerated. He is a cousin of Brian Ferguson (C’18), the Georgetown alumnus once wrongfully incarcerated for homicide and exonerated after serving 11 years of a life sentence.

He also spent years doing community organizing with underserved youth and has other relatives who were wrongfully incarcerated.

“I’ve taken a lot of classes,” said student Roy Middleton during class. “I’ve been locked up for 25 years, and I’ve taken classes for at least 20 of them. And this is the best class I’ve ever taken.” 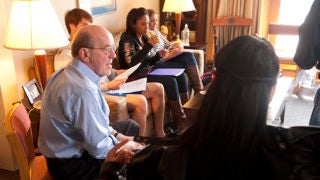