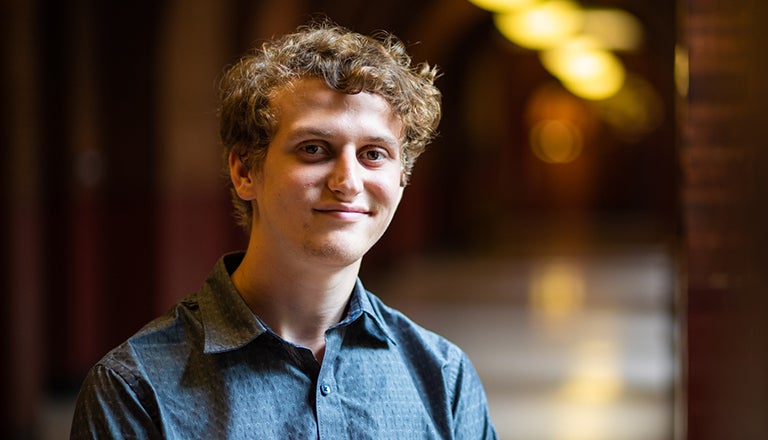 Paul Rochford (C’20) has traveled to Eastern Europe to help identify previously unknown mass graves during the Holocaust under a Georgetown professor’s guidance, Rev. Patrick DeBois, the inaugural holder of the Braman Endowed Professorship of the Practice of the Forensic Study of the Holocaust. Rochford works part time at the Campus Ministry office, enjoys playing two woodwind instruments, directs music for Georgetown plays and is a triatholaner.

Major: History, with a focus on Russia and Eastern Europe

Academic Direction: Rochford’s Russian history course in his freshman year served as an introduction to a regional study he would eventually delve into deeper. He then took a course taught by two Georgetown priests called Holocaust by Bullets that involved a trip to Eastern Europe.

“Father Patrick Desbois and Father Dennis McManus work with the Center for Jewish Civilization in the SFS, and their classes and a lot of the classes in the department have been really informative. I took the class that goes to Minsk, Belarus, to study the Holocaust and what happened in Eastern Europe,” Rochford says. “The classwork and research I’ve done and the advice from professors I’ve received have helped shape my academic direction, and where I want to go. I definitely didn’t have this before I got to Georgetown.”

Career Goals: Rochford hopes to one day work in international law, and has set his sights on a career at the Organization of Security and Cooperation in Europe.

“That trip and that class made me really interested in that region, specifically that of the history of the Holocaust,” he says. “What I want to do with my history degree is pursue something in human rights and fighting human rights violations. I want to help people and make the world a better place.”

Campus and Community Activities: Aside from his intellectual pursuits, Rochford enjoys exploring his creative side, at work and in student clubs. Rochford works for the Campus Ministry communications office, helping with graphic design and photography and creating posters and filming events for the many chaplaincies on campus. He says he has found this to be a great way to learn about different faiths.

“It’s really interesting to hear their points of view,” he says. “If I ever have a question about a certain aspect of faith tradition, I just go and ask them.”

The senior also plays saxophone in the GU Jazz Band, bassoon in the GU Orchestra, and directs music for shows with the Department of Performing Arts and the Mask and Bauble Dramatic Society. He also has composed music for the Nomadic Theatre Company. Rochford even finds time for athletics as a member of the university’s Club Triathlon team.

When asked how he juggles so many commitments, Rochford says, “It’s all stuff that I enjoy doing, so it’s not work.”

Favorite spot on campus: “I like the observatory. It’s a nice, quiet spot. The yard’s perfect for playing music and reading.”