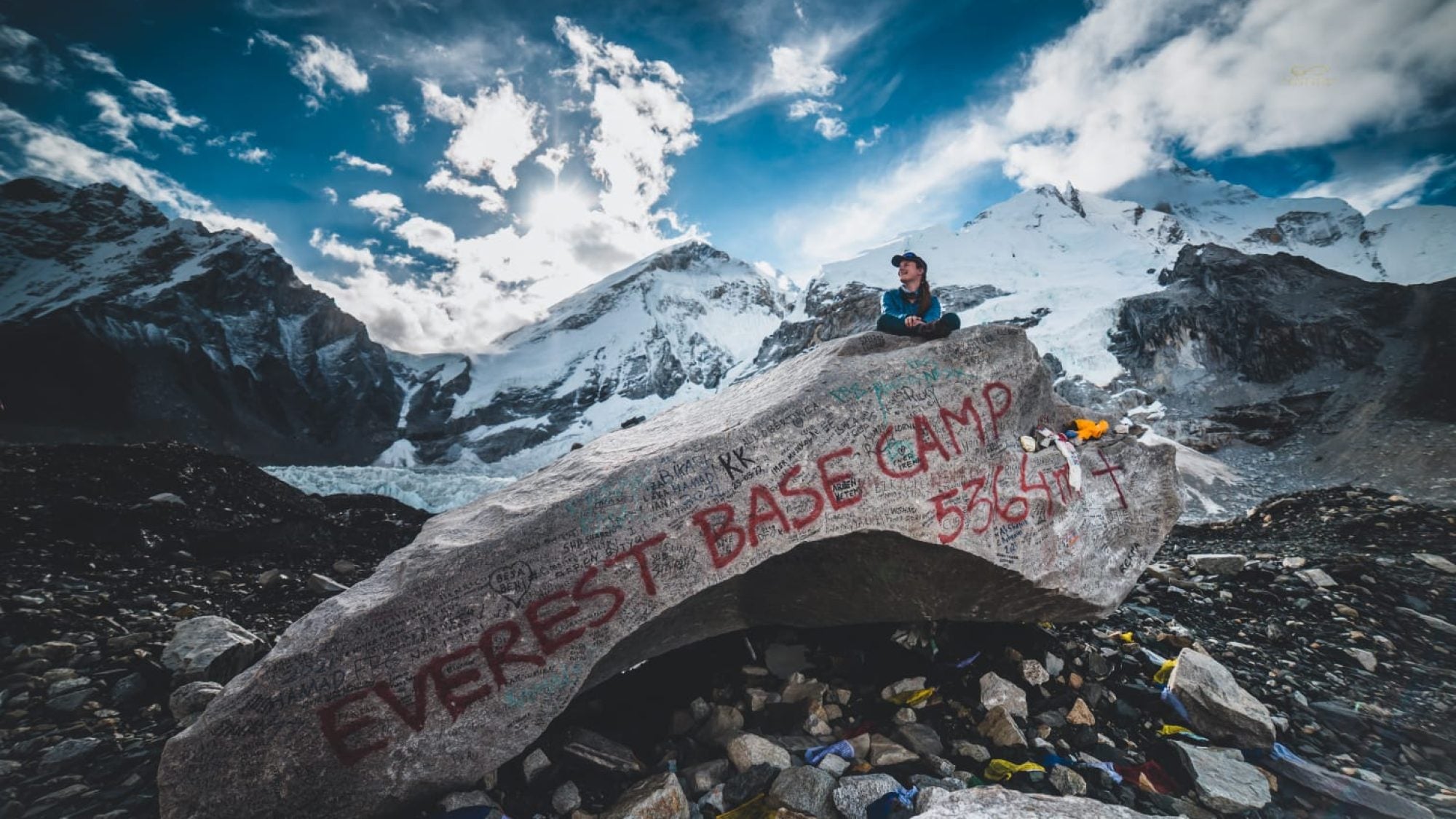 At the beginning of July, Elena Sapelyuk (SFS’23) launched a summer camp in Montenegro.

It was no ordinary summer camp. Sapelyuk had spent the past year designing a camp that taught displaced Ukrainian youth creative writing and peace-building skills.

She partnered with a local community partner and the Peace Engineers, a Ukrainian company that offers conflict resolution training, and cobbled together funding from Georgetown, including a $10,000 Davis Award for Peace and a summer scholarship she won from the Center for Social Justice, her Paul F. Pelosi F. Scholarship, and GoFundMe donations, to design a free camp for Ukrainian teenagers, many of whom had recently fled their home country.

“These kids went through really significant trauma in having to leave their country,” she says. “So first of all, it was really about creating a space that was stable and supportive. But it was also about seeing their potential to be people who come back to Ukraine. Because the war will end one day, and to do good, these skill sets are going to be really important.”

On day one of camp, Sapelyuk, a Russian-Ukrainian American who emigrated to the U.S. when she was six, was curious to see how teenagers would take to a summer camp about peace. It would take the next five weeks for her to find out.

As Sapelyuk began her camp, Hoyas around the world also dug into projects, research, internships, volunteer and work experiences, from studying glacial melt on Mt. Everest to assisting migrants and refugees at Union Station in Washington, DC.

Follow along on their summer adventures with these mini profiles.

Reporting From Mt. Everest Base Camp

As Sarah Watson (SFS’23) walked across the Khumbu Glacier in Nepal, she could hear the ice crack beneath her hiking boots. She was trekking toward Mt. Everest’s base camp, 17,598 feet high, for a story she was writing for the Nepali Times. Alongside the glacial path, she watched ice melt and slide into a newly formed glacial lake.

“You hear about glacial melt all the time, but you usually think of the Arctic Poles. To see that melting in front of you, it makes it a reality. This is ground zero for climate change,” she said of Nepal. “It’s beautiful and a little terrifying.”

Watson, the former editor of Georgetown’s student newspaper The Voice, was interning for the Nepali Times and researching the impact of Himalayan glacial melt and climate change on South Asia’s geopolitics and communities as part of Georgetown’s Kalorama Summer Research Fellowship, which funds undergraduates’ independent summer research.

Over two months in Nepal, she hiked to Everest base camp with a group of mushroom scientists who were documenting the Everest region’s biodiversity. She climbed for 16 hours on Lobuche, a 20,000-foot peak, with an ice ax and crampons. And she interviewed climate change experts, government leaders and athletes to document their stories.

By the end of her internship, she knew she wanted to pivot her senior thesis from just “doom and gloom” on glacial melt to proposing solutions to mitigate climate disasters.

“The glaciers are melting. That’s a fact,” she says. “So how can we build climate resilient, sustainable infrastructure, so when the glaciers do melt, we have disaster mitigation prepared? I want to answer these questions but also look at it through a geopolitical lens.”

Watson is writing about her experience for the Washington Post and hopes to return to Nepal next year to join glacial melt research and write stories about the people affected by and addressing climate change in Nepal.

In the Room Where It Happens

This summer, Jackson Mittleman (C’23) interned for the Democratic National Committee (DNC). He wrote memos for President Joe Biden and Vice President Kamala Harris on campaign issues, tracked federal races and trends and compiled call sheets for the president for when Democratic candidates won a race.

The internship gave him an inside look at campaign strategy — a new arena for the government major who has been immersed in politics since he was 11 years old.

Mittleman grew up in Newtown, Connecticut, and remembers when, in 2012, 26 children and adults were shot and killed in Sandy Hook Elementary School, a mile down the road from his middle school. He was 10 years old.

In the years following, Mittleman became active in the Newtown Action Alliance, a grassroots organization working to end gun violence. He lobbied on Capitol Hill, organized fundraisers, rallies and protests, and spoke at March for Our Lives in 2018, a student-led rally for gun violence prevention.

He transferred to Georgetown his sophomore year and continued his advocacy: He’d attend class, change into a suit, and take the bus to meetings with politicians as the Alliance’s federal affairs manager. Through his classes, he discovered a deeper interest in politics and legislative advocacy. And after connecting to the DNC through a Georgetown alumni, Mittleman found his niche.

“I learned how to make calculations myself instead of observing and reading about them. And I got to be in rooms where those calculations are happening. I’ve loved every minute of it. And I would not have had this experience without Georgetown,” he says. “I felt like it was a good step in the journey to better understand our political system, political strategy and how to organize for your interests and win.”

“I learned how to make calculations myself instead of observing and reading about them. And I got to be in rooms where those calculations are happening. I’ve loved every minute of it. And I would not have had this experience without Georgetown.”

In June, Mittleman and his Newtown Action Alliance team members stood on the White House Lawn with President Biden as he signed the Bipartisan Safer Communities Act, a gun control bill. It was a hard-earned win — and an issue Mittleman won’t stop fighting for, no matter where his career takes him next.

A New Take on Well-Being in Spain

Kate Barranco (SFS’23) is a research assistant for Georgetown’s Red House, an education innovation incubator at Georgetown. As a senior minoring in cognitive science, she’s spent the past semester immersed in a topic she’s passionate about: the connection between intergenerational trauma and well-being.

She’s worked alongside an international think tank of experts, academics and practitioners who were researching the topic, and, in the coming months, will contribute to their research paper, writing about the role of youth voices in conversations around intergenerational trauma.

“I’ve really appreciated that they haven’t treated me as the research assistant who’s doing some of the nitty-gritty work. They value my voice and youth voices as a really important part of this conversation,” she says.

In June, Barranco joined the Red House and think tank leaders in Bilbao, Spain, for an international conference centered on well-being. The conference was part of Georgetown’s recent partnership with the Wellbeing Project, a coalition of social change organizations and higher education institutions that works to advance the well-being of social change leaders.

She helped organize a meeting in which Red House representatives presented their findings on intergenerational trauma and well-being, and she attended the week’s events, which included the international debut of Remember This: The Lesson of Jan Karski, a one-man show created by the Laboratory for Global Performance and Politics at Georgetown.

For Barranco, the summit was the first time she met many of her colleagues in-person and could build relationships off Zoom. It also helped change her perception of well-being and how she approaches leadership, she says.

“We have to take care of ourselves, and not just in a surface-level way, if we want to bring the best version of ourselves to the front lines of our work,” she said. “And I feel more connected to my school and alumni in a way that I hadn’t before. It’s been special.”

During finals week, Jackie Lamas (G’23) got an urgent call from a Georgetown alumna. Buses of migrants and refugees were arriving at Union Station, and a church sheltering recent arrivals was at capacity. Could she come to a Zoom meeting the next day to help?

Lamas, president of the Migration and Refugee Policy at Initiative (MRPI), a student organization at Georgetown’s McCourt School of Public Policy, started mobilizing.

Since April, the governors of Texas and Arizona had sent more than 6,000 migrants and refugees in buses to downtown Washington, DC. Llamas was determined to help.

She began volunteering at an emergency respite shelter for migrants. Through MRPI, she set up donation drop sites on Georgetown’s main campus. She partnered with Georgetown Law’s Immigration Law Student Association (ILSA), DC-based immigration lawyers and the nonprofit, Humanitarian Action Org, to produce a video and legal resources that offer migrants guidance on asylum proceedings. Georgetown students are translating the materials from Spanish into six different languages. And one night in July, she brought 15 volunteers to Union Station to help assist three buses of migrants that had arrived unexpectedly. The DC shelters were all full that night.

“It was a very emotional experience,” Lamas says. “As somebody who wants to have an impact someday on immigration policy reform, it was super important for me and the other MRPI members to get to be on the front lines of a humanitarian crisis and get to understand what the experience is like for the displaced people.”

She ended up quitting her summer job to spend more time volunteering. For Lamas, whose parents emigrated from Mexico, the project is both personal and professional. She plans to change her career track from health policy to migration. And this fall, she will be a research assistant for the Institute for the Study of International Migration at the Walsh School of Foreign Service. And she’ll continue getting the word out through MRPI.

“We just want students to know what’s happening in their own backyard,” she says. “And I think it’s important for students to know exactly how policies impact people, because these are real people who deserve to be dignified. These are real families that are being separated and either hurt or benefited by these policies.”

Back at Summer Camp in Montenegro

At the end of summer camp, Sapelyuk invited the campers’ parents to an exposition of their creative writing. One mother told her the camp had changed her son. His family’s town was heavily bombed in Ukraine, and he escaped under heavy fire holding his two-month-old sister. He hadn’t spoken since. Over the course of the program, her son began talking again, she said.

“It proved to me that you never really know what impact you’re having,” Sapelyuk said. “Those little interactions with the kids convinced me that this should keep going. So I think it’s a happy story.”

Sapelyuk returns to DC this August, and plans to spend the coming months formalizing the program and its curriculum so it can be replicated. She feels hopeful it can be, she said.

“They gave me a lot of hope for the future because these kids had every reason to not show up, every reason to not want to be here and then they did. And they did a really great job. That really impressed me,” she says. “We learned so much, and we put so much work in. I don’t want it to end here.” 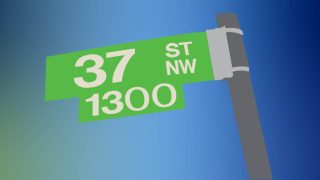 #GeorgetownBound: Heading Home to the Hilltop 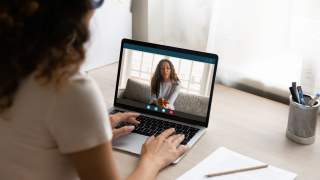 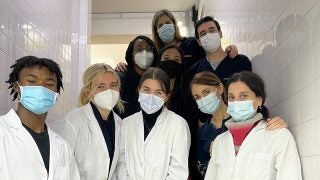