Editor’s note: In some cases, only first names were used to protect Ayuda clients’ privacy.

The Legacy of a Dream Award identifies emerging leaders who are working to solve key issues in Washington, DC. Georgetown established the award to reinforce its engagement within the city and recognize the award’s namesake, John Thompson Jr., the legendary Georgetown head basketball coach emeritus, social justice advocate and DC native.

Fitzgerald, executive director of the nonprofit Ayuda, received the award as part of the 19th Let Freedom Ring Celebration, an annual public event hosted by Georgetown and the Kennedy Center that honors Dr. King’s life and legacy. This year’s celebration featured a performance by Leslie Odom, Jr., a Tony- and Grammy-Award-winning actor and singer who starred in the Broadway musical, Hamilton. 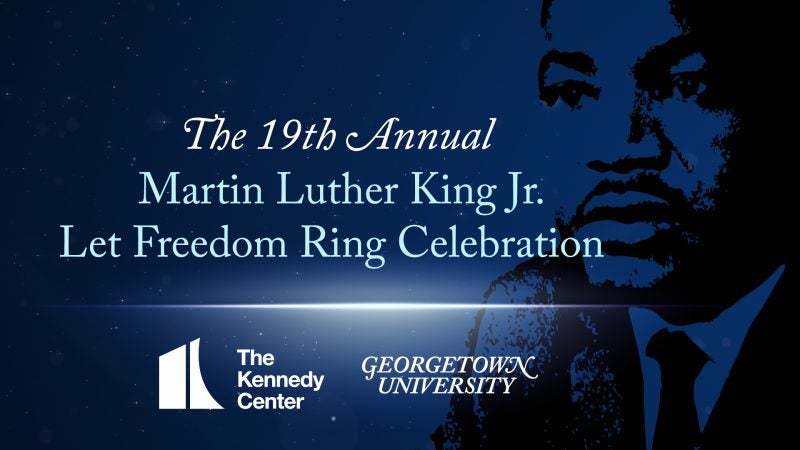 Award recipient Fitzgerald has dedicated her career to providing low-income immigrants with legal aid, language access and social services at Ayuda, a 50-year-old nonprofit. Since becoming executive director in 2016, Fitzgerald has expanded the DC-based nonprofit to reach more than 150,000 immigrants across the city, Maryland and Virginia. Along the way, she’s watched Ayuda’s impact unfold across generations.

Fitzgerald has leaned on her Nonprofit Management Executive Certificate from Georgetown to grow the nonprofit into a $10 million organization. And she has led Ayuda to serve on the front lines in DC as more than 10,000 migrants have been bused to the nation’s capital by the governors of Arizona and Texas since April 2022.

Fitzgerald and staff have met them with clothing, food, transportation support and hygiene items. They’ve also provided case management support and legal orientations on their rights and responsibilities within the immigration system, and assisted some individuals in applying for work permission.

“As executive director at Ayuda for the past six years, Paula has led their work to expand their services throughout the DMV region, and in recent months, has guided their efforts to address the difficult circumstances around the forced movement of immigrants and asylum seekers to our city,” Georgetown President John J. DeGioia said at the event. “Their work to support these communities has never been more important than it is right now. We are honored to recognize Paula and Ayuda for their vital work — for the hope, care and support that they represent for so many.”

“Ayuda is often a turning point in people’s journeys,” Fitzgerald said. “Many of Ayuda’s clients have suffered a great deal of trauma in their home country, and then had perilous journeys coming to the United States. Upon arrival, Ayuda gives them the support to start rebuilding their lives. Having the Georgetown community behind us in this work will only make it much stronger.”

Turning a Passion Into a Career

For Fitzgerald, advocating for immigrants hits close to home. Her mother immigrated to the U.S. from Colombia at age 18 and worked with immigrant populations as a social worker. She gave birth to Fitzgerald at Georgetown University Hospital, and immediately afterward, took her to her citizenship swearing-in ceremony. “The first thing I did as a human,” Fitzgerald says, “was see my mom become a U.S. citizen.”

Growing up, Fitzgerald witnessed family members and friends go through the immigration process and learned how challenging — and cruel — it could be. Often interpreting for her Spanish-speaking grandmother and newly arriving students at school, she also learned how language could unlock connection and understanding — crucial learnings that would shape the course of her career.

At every stage of her education and career, Fitzgerald volunteered with immigrants. In high school in northern Virginia, she helped newly arrived elementary school Spanish-speaking immigrants learn to read in English.

During her undergraduate years at James Madison University, she visited the teenage child of a migrant farmworker in his family’s trailer and helped him prepare for his GED. In law school at the University of Virginia, she volunteered with the International Rescue Committee, where she helped a Congolese family obtain residency in the U.S. for the first time, and with the Migrant Farmworkers Project, where she visited migrant farmworker camps and spoke with migrants to ensure they were being treated fairly by their employers.

As law school continued, Fitzgerald’s interest in immigration began to shift from volunteer work to a career path. After graduation, a position as an immigration staff attorney opened at Hogar Hispano, Catholic Charities of the Diocese of Arlington. Fitzgerald leapt.

“I wanted to be able to serve immigrants and use my Spanish to support people in need and community members who are often overlooked,” she said. “It really hit me hard to see how the work of an immigration attorney can facilitate a lot of change for a family and for an individual. It felt like something that would make a lot of impact in a specific way.”

Advocating for Immigrants in the Courtroom

The Hon. Paul Wickham Schmidt, a retired federal immigration court judge, remembers first meeting Fitzgerald in the courtroom on a contested case. He was delivering the oral decision. Fitzgerald’s client was nervous, he said. As he announced the decision, he watched Fitzgerald reach over and hold her client’s hand under the table.

“I think she was telling him, by holding his hand, that no matter how it came out, she was there for him,” Schmidt said. “The humanity that represented moved me. That was my first and probably more lasting impression of Paula as an attorney who cared about justice, clients, about the court getting it right.”

Fitzgerald joined Ayuda in 2008 as an immigration staff attorney. She quickly climbed to managing attorney of Ayuda’s Virginia office, and in 2016, served as interim executive director of Ayuda before assuming the role full-time. Schmidt, who serves on Ayuda’s Advisory Council, said he was impressed with how Fitzgerald transferred her courtroom and client skills into organizational management.

“She had the same qualities — fairness, scholarship, kindness, respect, teamwork — but she sort of was the organization. She was the heart and soul,” Schmidt said. “When they chose her, they were reaffirming the values that made Ayuda great in the first place.”

Ayuda began as a George Washington University Law School Clinic in the 1960s, where it assisted immigrants targeted by consumer fraud, and by 1973, became a standalone nonprofit. Under Fitzgerald’s leadership, Ayuda has expanded to three offices, serving 8,000 immigrants every year.

“Our clients are putting their trust in us,” Fitzgerald said. “It’s not just a case; it’s their life. It’s going to make the difference of whether their child will be able to come to the United States to reunite with them or whether they’ll be able to work legally here in the United States. I take a lot of heart in the trust that people put in me to do the work, and really try to do the best job I can for everyone.”

Under Fitzgerald’s leadership, Ayuda has installed case managers and therapists to serve clients in every office, providing culturally specific counseling and emotional accompaniment, particularly for survivors of domestic violence, sexual assault and human trafficking. During her tenure, she’s also helped build on Ayuda’s language access program and translation services for other nonprofits in the area, so if a client who does not speak English goes to another provider, they may be provided with an Ayuda interpreter.

“Providing services to clients in their own language, that’s a passion for Paula and for all the staff at Ayuda,” she said. “Meeting people where they are is really important. We support our clients with all the services we provide so that they become empowered.”

Over her tenure, Fitzgerald has seen the multi-generational impact Ayuda has on families.

“Ayuda creates the opportunity for their children to do even better,” Fitzgerald says. “It brings me great joy to see a child of one of our clients start their journey in higher education, in a career. Seeing what they’ve been able to do with a little support along the way from Ayuda, it’s really powerful.”

‘They Brought Me Into the Light’

Dorinda, an Ayuda client, made the difficult decision to flee violence in her home country of Guatemala at age 24. When she arrived in the U.S., she faced human trafficking, exploitation and domestic violence. At one point, she was left for dead in an Arizona desert, she said.

“I didn’t have hope. I have two daughters in the United States. There was a moment when I thought the three of us would have to live on the street. That we wouldn’t have food. That I wasn’t strong enough to protect my girls.”

When she found Ayuda, she found support to overcome her emotional trauma and financial difficulties as well as assistance obtaining a visa — documentation that gave her not only security but confidence, she says, especially after feeling humiliated at work for not having documentation.

“Sometimes we think there is no way out. But there is a way out, because finding an organization like Ayuda was like finding a door out of darkness and into the light where I can be seen. Now, I have a voice.”

Dorinda, a client at Ayuda

Zoila, also an Ayuda client, came to the nonprofit after experiencing domestic violence. Once she arrived, her life changed, she said.

“I no longer felt as though I was running into a dead end with no way out like before,” she said. “I felt stronger, less depressed with more help from Ayuda. My daughter told me even as a little girl, ‘Ayuda is like a blessing from God.’ I thought, Wow, my daughter is young, but she can see the joy in my eyes from my experience with Ayuda.”

Zoila said her one goal was for her children to get ahead in life. She encouraged her daughter to pursue her education and apply to Georgetown. “I told her we have to dream big,” she said.

Her daughter was accepted to Georgetown in 2022. She is now in her first year at the university.

In 2023, Ayuda celebrates its 50th anniversary. Going forward, Fitzgerald plans for Ayuda to have a stronger advocacy presence, expand more of its services in legal and social services, and provide more language access. She says the partnership with Georgetown through the Legacy of a Dream Award can help propel this work.

“The power of Ayuda is providing hope,” Fitzgerald said. “It’s being there to support people who need a shoulder to lean on, to help them through this process. Ayuda and Georgetown have very similar values, and I think that, together, we can create more impact, more hope, more welcoming and more power to the communities we serve.”

Opening the event, the choir and members of the Georgetown University Jazz Ensemble debuted Williams’ original work, “We’re Marching On!” The piece was commissioned by Georgetown and inspired by Dr. King’s 1965 speech, “Our God Is Marching On!” Georgetown student poets, Cameren Evans (C’24), Isaiah Hodges (H’26) and Lucy Lawlor (G’23), performed spoken word accompaniment. Williams also led the choir to perform his second work, “We Are the Ones To Heal Our Land,” a social-justice-themed ballad inspired by a Bible verse.

“As we gather here to celebrate the award recipient, Paula Fitzgerald, executive director of Ayuda, we ask that you enable us, Lord, to work for the betterment of our community and this great nation,” Eluojierior said. “In Dr. King’s words, ‘Darkness cannot drive out darkness; only light can.’ So we ask that you enable us to be an embodiment of your light.”

Among the songs Leslie Odom, Jr. performed included “Wait for It” and “Dear Theodosia,” which he originally performed in the hit Broadway musical, Hamilton, and “Speak Now,” from the Oscar-nominated movie he starred in, One Night in Miami. In an encore performance, he ended with a rendition of “Ave Maria.”

“I’ve been contemplating the man, the man’s legacy and what he really left us here,” Odom said during his encore. “What he left us among so many things is an example of Christ energy. In his honor, we call his name tonight, we lift him up tonight, we send our gratitude for all that he did. Thank you, sir.” 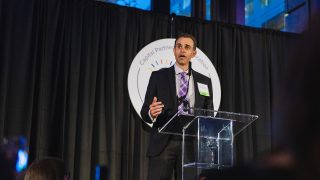 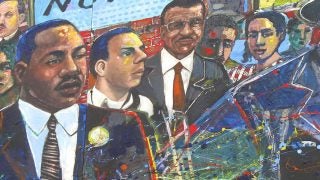 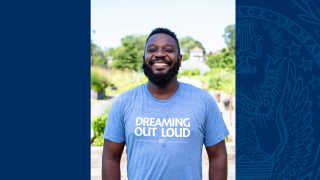