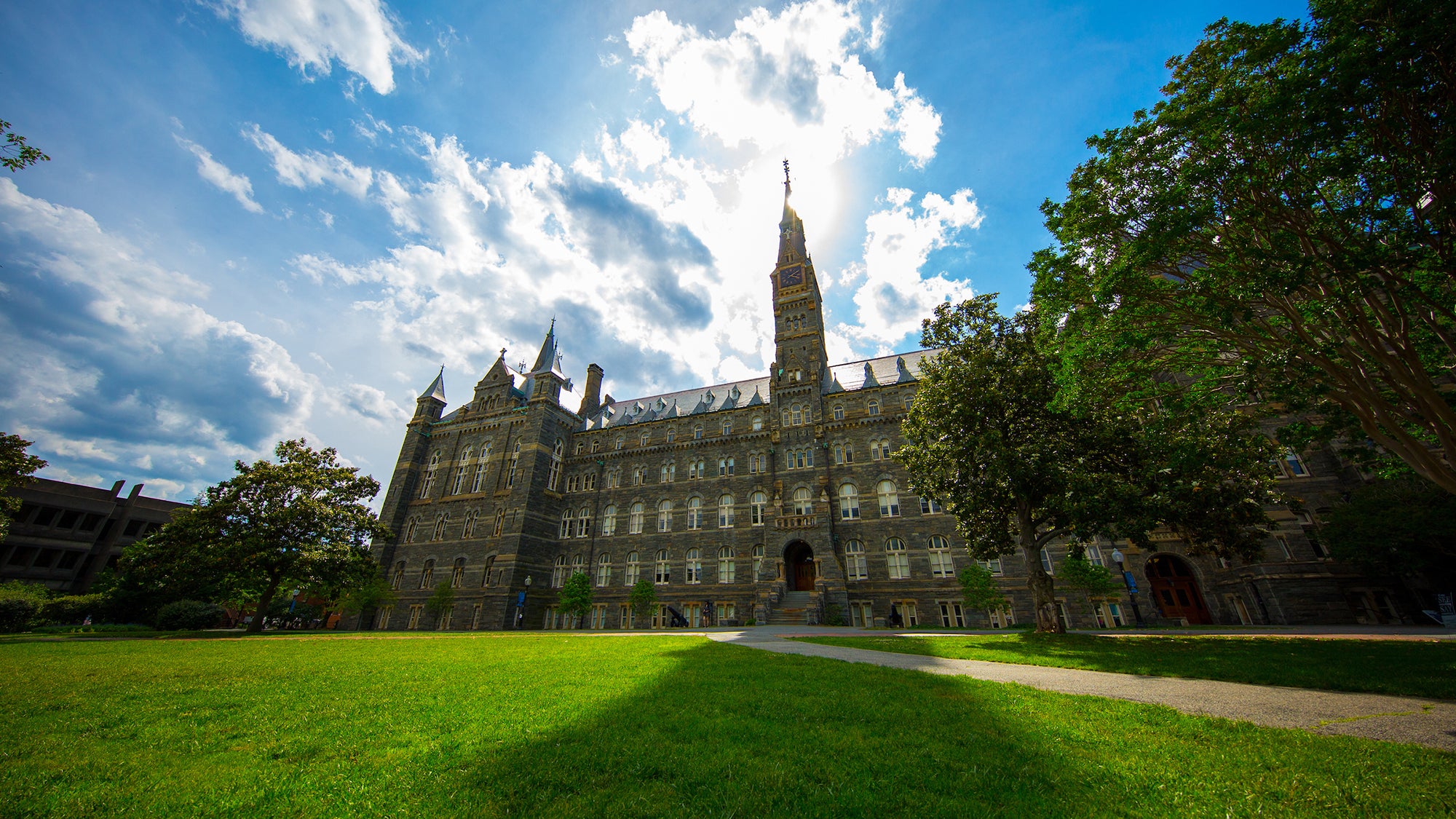 The Georgetown University Board of Directors today adopted a policy on fossil fuel and impact investments that is part of the university’s broad commitment to sustainability.

Under the new policy, the university will continue to make investments that target a market rate of return in renewable energy, energy efficiency and related areas while freezing new endowment investments in companies or funds whose primary business is the exploration or extraction of fossil fuels.

Georgetown will divest from public securities of fossil fuel companies within the next five years and divest from existing private investments in those companies over the next 10 years.

“Divestment allows us to divert more capital to fund development of renewable energy projects that will play a vital role in the transition away from fossil fuels – part of the long-term solution required to prevent the most dangerous effects of climate change,” says Michael Barry, Georgetown’s chief investment officer.

“Our endowment has for a number of years profitably invested in the development of renewable power assets and energy efficiency companies, and we are continuing to search for new opportunities,” he adds. “But climate change, in addition to threatening our planet, is increasing the risk of investing in oil and gas companies, as we expect a more volatile range of financial outcomes. We will continue to evaluate the efforts of these companies, and be hopeful that many will move further toward contributing to a sustainable future.”

Divestments will take place on a timeline that is both financially responsible and expeditious, and the university retains flexibility with respect to commingled investment funds as needed.

The board acted today on a recommendation from the university’s Committee on Investments and Social Responsibility (CISR), which includes faculty, students and staff and reviews and considers proposals from the Georgetown community on socially responsible investment.

Recent efforts in support of sustainability include the creation of a multiphased strategic plan that explores all the ways in which Georgetown can honor the pope’s Laudato Si’ encyclical, such as reducing its carbon footprint, supporting education, research efforts and other measures.

“Animated by our Catholic and Jesuit identity, our University has sought to strengthen opportunities for our community to contribute to a more sustainable future by fostering dialogue, research, education and the engagement of all members of our community,” says Georgetown President John J. DeGioia.“This decision by our board of directors advances the deep commitment we have to sustainability and our efforts to respond to urgent global environmental challenges.”

The action today by the board is the result of a multiyear engagement within the Georgetown community that included students, faculty and staff.

Such engagement included the long-term sustained efforts of the student-run GU Fossil Free (GUFF), which submitted a number of proposals to CISR.

As with prior proposals by GUFF, this most recent recommendation was thoroughly evaluated by CISR over the course of the last year, incorporating input from GUFF and other members of the community, CISR unanimously recommended the current divestment proposal to the board.

“This is a major step forward, but also one of many in a comprehensive and complex set of commitments that Georgetown is making to sustainability and to the environment more broadly,” Marra said. “It’s an exciting time to be on the Georgetown campus and for the broader university community as we do what’s necessary to ensure a healthy environment and a sustainable future for generations to come.”

GEI, created in 2012, received a boost in 2019 when it hired Marra, a leading environment and conservation expert who is now also the Laudato Si’ Professor in Biology and the Environment and a professor in the McCourt School of Public Policy.

The initiative is a university-wide effort to advance the multidisciplinary study of the environment and sustainability in relation to society, scientific understanding, sound policy and the complex challenges facing the planet.

For example, the university now offers a Certificate in Sustainable Business at the McDonough School of Business as well as an undergraduate minor in environmental studies, among other academic programs.

Audrey Stewart has worked on sustainability efforts at Georgetown since 2010 and became director of the university’s Office of Sustainability in 2013.

“Georgetown has a long history of advancing sustainability in our campus footprint and business practices – from our efforts to reduce our own greenhouse gas emissions to our nearly one million square feet of LEED green buildings, sustainable transportation systems and more,” she says. “This new commitment relating to endowment investments represents another significant step in this work.”

Another recent effort in support of sustainability is the internal Laudato Si’ Fund, which the university established in 2019 to provide grants for faculty, student and staff sustainability projects.

A project that raises awareness about global pollinator decline, led by William Hahn, an adjunct professor in the university’s Science, Technology and International Affairs (STIA) program, is one example of proposals supported by this fund.

Other Laudato Si’ Fund projects include one, led Mindy McWilliams of the Center for New Designs in Learning and Scholarship (CNDLS), that is designed to incorporate sustainability across the university curriculum

Another project, led by Joseph McCartin, executive director of the Kalmanovitz Initiative for Labor & the Working Poor, is aimed at building a working group among Catholic institutions of higher education to develop labor and environmental standards for food procurement on their campuses.

Georgetown has demonstrated its commitment to socially responsible investing in recent years through several actions. In 2015, the board of directors approved a proposal to discontinue direct investments of endowment funds in companies whose principal business is mining coal for use in energy production.

The board adopted an enhanced Socially Responsible Investing Policy in 2017.

The policy outlines the university’s approach to socially responsible investing and demonstrates its intention to integrate its commitment to social justice, protection of human life and dignity, stewardship for the planet and promotion of the common good into its investment management practices.

In 2018, the board of directors’ Committee on Finance and Administration supported a recommendation to use reasonable efforts to avoid investments in companies whose principal business is the extraction of bituminous sands or “tar sands.”

In the past three decades, Georgetown has developed and achieved a number of sustainability goals, supporting sustainability research, educating students on threats to the environment and reducing the university’s carbon footprint.

A banner year for Georgetown’s sustainability efforts came in 2014, when the university reduced its carbon footprint by more than 71% from a base year of 2006 through the procurement of renewable energy certificates (RECs) for 100% of its power, meeting its greenhouse gas goal six years ahead of target.

Among the many programs the university has created, the Move Out drive waste reduction program works with university staff, volunteers and local charity partners to divert an increasing quantity and quality of goods from the waste stream.

In 2018 alone, the drive diverted over 56,000 pounds of material, valued at $186,000, which made it into the hands of local individuals living in poverty through the help of KEYS for the Homeless.

Marra was a co-author of a study published in Science this past September that revealed that nearly 3 billion birds have disappeared from the United States and Canada since 1970.

“This study is consistent with what we’re seeing elsewhere with other populations showing massive declines, including insects and amphibians,” Marra said after the study’s publication. “We must address these immediate and ongoing threats, as the domino effects can lead to the decay of ecosystems that humans depend on for health and livelihoods.”

Other research on campus explores public health issues associated with climate change, looks at how the world will transition to a low-carbon economy and measures the decline of pollinators and much more.

Georgetown has brought in global and national leaders to talk about climate change.

This year, the university has hosted a conversation with former UN Secretary-General Ban Ki-Moon, former Irish President Mary Robinson and former California governor Jerry Brown about the advancement, due to climate change and nuclear war and other threats, of the “Doomsday Clock,” which moved to its closest-ever time to midnight or the apocalypse.

Georgetown also recently welcomed actress and activist Jane Fonda to talk about climate issues and her “Fire Drill Fridays” protests, and Georgetown has plans for future talks and collaborations.

Sustainable development expert William McDonough of William McDonough + Partners has worked with Georgetown for several years as part of its strategic sustainability planning process and has helped enhance and accelerate student-led proposals.

“Whether it’s through faculty and student scholarship on climate change or a staff member using a reusable mug in the office, we all have an opportunity through our daily choices to have a positive impact on the future, both at Georgetown and in the world at large,” Stewart said after a 2018 session with McDonough and students.

Joining a group of leading universities across the country in 2017, the university reaffirmed its commitment in support of the Paris Agreement on climate change continuing its work toward slowing the rise in the global average temperature and transitioning to a clean energy economy.

“As a Catholic and Jesuit university, we believe caring for our environment is one of the most urgent moral and practical concerns of our time,” DeGioia said nearly three years ago. “In reaffirming this commitment, we seek to strengthen our ongoing efforts to bring the intellectual and spiritual resources of our community to bear on the important work of being ever more sustainable as a university and contributing to our environment in beneficial and concrete ways.” 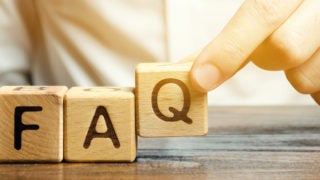 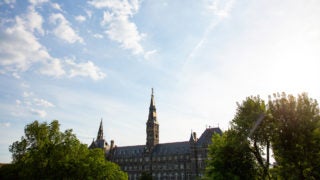 Georgetown: Working Toward a Sustainable Future 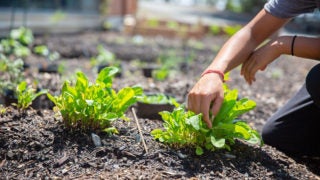