Georgetown alumnus Brian Ferguson (C’18), once wrongfully incarcerated for homicide and exonerated after serving 11 years of a life sentence, wins a prestigious Marshall Scholarship to pursue a master’s degree at the University of Oxford.

Ferguson is one of only 48 students across the nation to receive a 2018 Marshall, which he plans to use toward a degree in comparative social policy.

How He Plans to Use the Marshall: Ferguson will study leading international policy trends and approaches to social policy and criminal justice reform, then apply the results to a comprehensive and collaborative effort between governments and leading universities to develop effective policy solutions. He plans to start this process in his hometown of Washington, DC.

“As a DC native, Georgetown was the university I had grown up revering,” the recent alumnus says.“Having the opportunity to earn my degree and contribute in my own way to Georgetown’s rich history of excellence and service to others is really a dream come true. It was of paramount importance when I came home to finish my degree. That opportunity was taken away from me before. I wanted to feel better about myself and do this for my family and my future.”

Most Influential Professor: Ferguson says government professor Marc Howard served as an inspiring mentor and advisor during his studies.

“The amazing criminal justice work he continues to do through Georgetown, and his classes – Prisons and Punishment and Making an Exoneree – are nationally recognized,” Ferguson says.“Marc’s work exemplifies everything that Georgetown stands for. He has had an immeasurable influence on my path and my perspective.”

Campus and Community Activities: While attending Georgetown, Ferguson developed Start Line, which he describes as “Yelp for returning citizens.” The nonprofit venture allows those who have been incarcerated to identify, locate and rate critical housing, employment and other social service resources.

While working at the Mayor’s Office 50 to 60 hours a week and going to school full time, heworked closely with the Georgetown Prisons and Justice Initiative (PJI) to create programs such as the Paralegal Fellowship Program and helped coordinate Georgetown classes for people in DC Jail for what he calls “unprecedented second-chance educational opportunities.”

“He has more energy, drive, perseverance, creativity, moral force of character, civic mindset and interpersonal skills than just about anybody I know,” says Howard, founding director of PJI. “Despite his ordeal – which is truly unimaginable and horrific – Brian emerged from prison as an extremely thoughtful, compassionate and positive person.”

Career Goals: Ferguson hopes to continue his academic career by eventually attending Yale Law School or Georgetown Law. He also would like to establish a social justice consortium of top level universities in countries such as the United Kingdom and Sweden that would work collaboratively to develop policy and create programming designed to remove racial and socioeconomic barriers, especially for those involved in the criminal justice system.

For more information about the Marshall Scholarship and other fellowship opportunities, please visit the Georgetown Office of Fellowships, Awards, and Resources at gofar.georgetown.edu or email gufa@georgetown.edu. 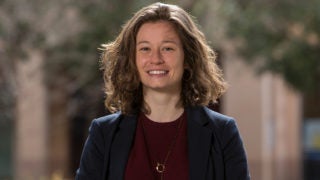