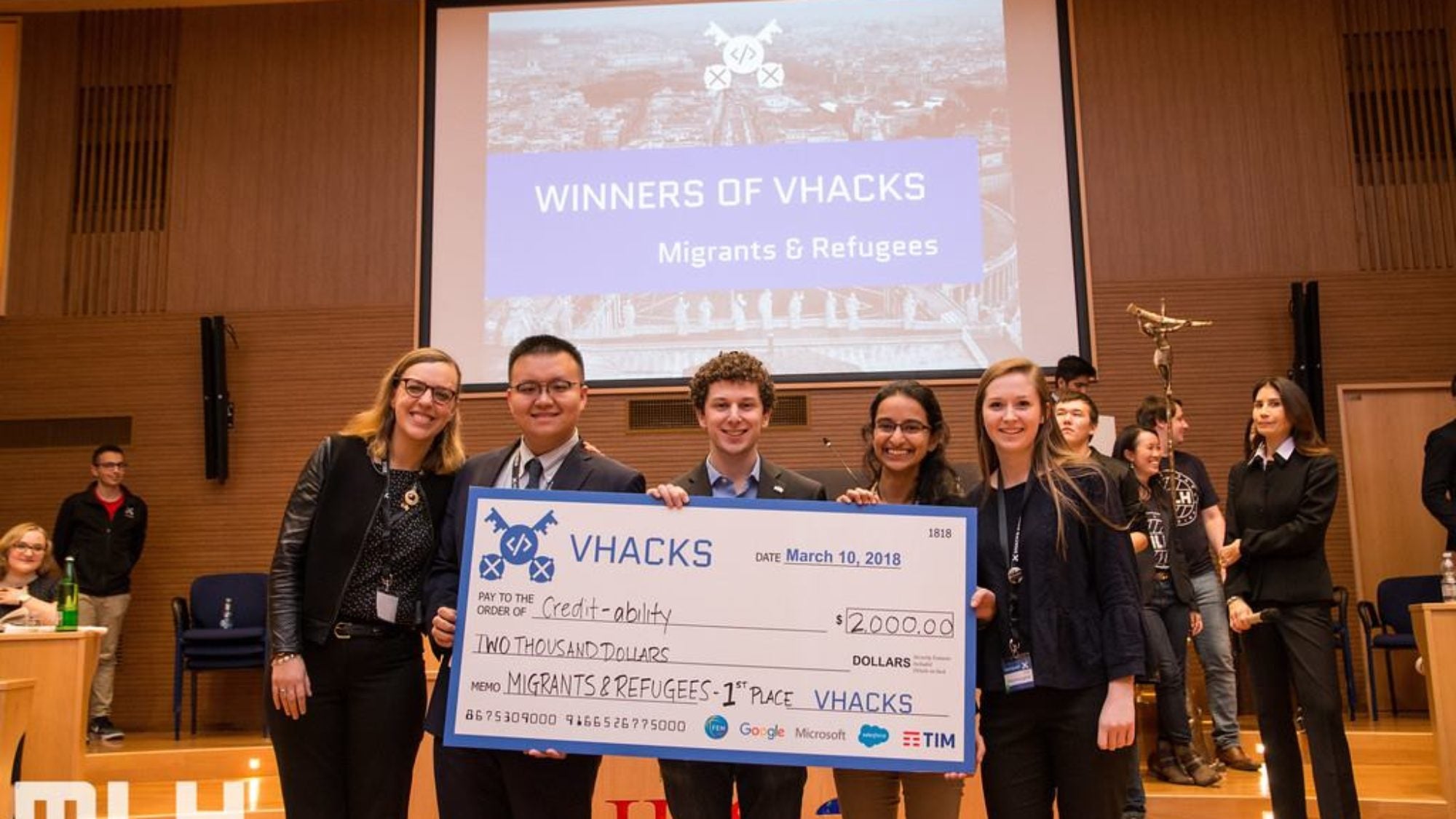 Five Georgetown students, including two undergraduates, won first place in the Migrants and Refugees category at VHacks, an event at the Vatican that seeks to use technological innovation to address global problems.

The website offers a place for refugees to input their often short-term employment, income and payment histories since they’ve been in their host country.

Credit/Ability then uses the information to compute a credibility score. If the score is high enough, Credit/Ability works with organizational backers to provide a lease guarantee that puts refugees on the same footing as others looking for long-term housing.

“It was thrilling to experience VHacks, and to know that around me another 119 students were collectively focused on the confluence of technology and social impact,” says Obus, of Princeton, N.J., a theater and performance and American studies double major now pursuing a degree in the university’s Communication, Culture and Technology (CCT) Masters Program. “Pope Francis’ call to action was just that, a call, and we’re now trying to answer that call.”

Migrants and refugees were the subject of Pope Francis’ message on the Vatican’s World Day of Peace on Jan. 1.

“In a spirit of compassion, let us embrace all those fleeing from war and hunger, or forced by discrimination, persecution, poverty and environmental degradation to leave their homelands,” he said at the time. “We know that it is not enough to open our hearts to the suffering of others. Much more remains to be done before our brothers and sisters can once again live peacefully in a safe home.”

Obus says the team made a deliberate decision to build something that was “feasible, viable, and sustainable, that might not be flashy but hopefully adopted by a faith-based institution or small NGO.”

She said the idea developed after meeting resilient refugees at the Sacred Heart Basilica Community Center in Rome.

“We are really proud of the product and excited by the potential it has moving forward,” Obus explains. “Our team is regrouping to think about how to leverage the prize money and interest from outside partners to build it into something real.”

The other members of the team are also excited about the win.

McLoughlin is a government and computer science double major from San Francisco, and Glass, of Los Gatos, California, is in the Science, Technology and International Affairs program at the School of Foreign Service.

Originally from Singapore, Shekhar is in the Global Human Development (GHD) Program, and Wang, who hails from Beijing, China, is in the Master of Science in Analytics Program at Georgetown.