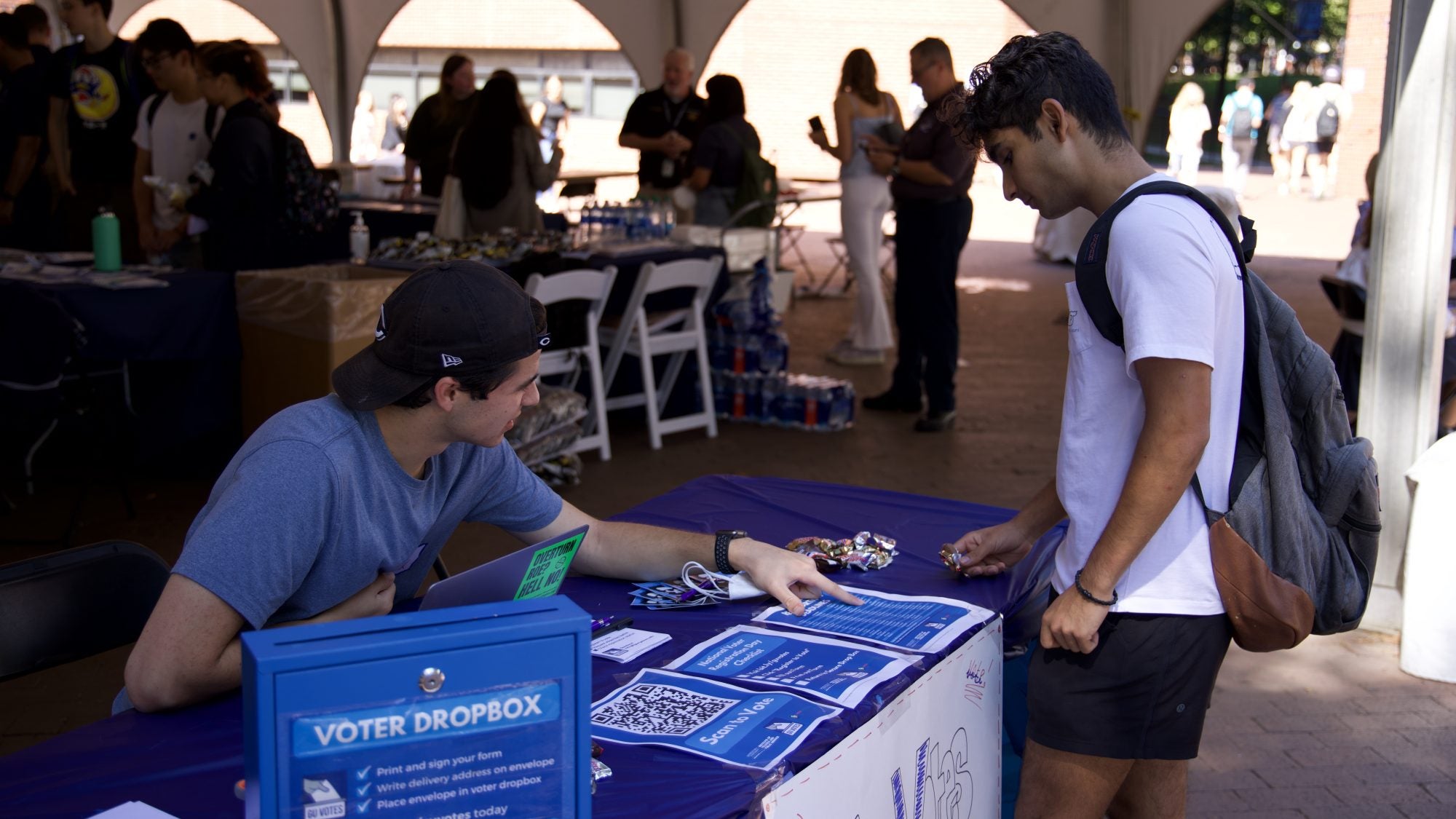 Title: The Results Are In: Student-Led Initiative Helps Get Out the Vote

At 11:00 a.m. on election day, Alex Grass (C’24) will walk with students from the John Carroll statue on main campus to a nearby school to vote.

Grass, who’s on the leadership team of GU Votes, a student-run initiative to encourage voter participation at Georgetown, is hoping that this year, students will cast their ballots in just as high numbers as they did in 2020, a banner year for voter turnout at the university.

He isn’t just crossing his fingers. Since September, Grass and fellow leaders on the GU Votes team have volunteered behind-the-scenes to help students register to vote for the midterm elections. They’re continuing the work of alumni who’ve worked to increase Georgetown’s voting rates – efforts recognized by the ALL IN Campus Democracy Challenge as the highest student voter registration and voter turnout in DC in 2021.

“We’re making sure students know exactly what issues are on the ballot, what candidates are on the ballot, and that their voice is always significant,” Grass said. “It’s important to not sit on the sidelines and watch as new laws are passed, new ballot initiatives are held, to figure out what the future of this country should look like. As students, as the next generation of leaders, it starts now.”

A Student-Driven Approach to Voting

As midterms approach, Grass and the GU Votes team have worked to establish a non-partisan source for voting questions on-campus and break down barriers to voting, particularly for first-year students navigating their home state’s requirements and deadlines for absentee voting.

Grass himself is familiar with the process. At age 18, he struggled to navigate his home state’s voter registration website, and decided to create a website to make it easier for high schoolers in his area to vote. Grass, who had canvassed for political campaigns since he was seven years old, was drawn to Georgetown because of the university’s Institute of Politics and Public Service at the McCourt School of Public Policy, and GU Votes.

“Both organizations have unparalleled access to the city, to unique voices and the administration, and support voting in an unprecedented way,” he says. “We get so much support from organizations, institutes and offices — they allow us to do the most with our goal.”

Their goal is to register all students to vote, which they’re closing in on: In 2016, 87% of Georgetown students were registered to vote, according to a Tufts University report. Four years later, 93% were. The university’s voting rate has also climbed from 61% to 79% — 13 points higher than the national average.

In addition to fostering a culture of voting, students at GU Votes have strategically worked to make voting easier.

In 2019, GU Votes partnered with the university to add a registration page to the student portal, where students can learn about their state’s registration process when registering for classes. The student-led initiative has also partnered with Athletics and student clubs to inspire voting; with Georgetown’s Office of Federal Relations to remind every student of their state’s registration deadlines and processes; and with the Georgetown mailing service to alert students when they’ve received their voter registration.

They’ve launched social media campaigns to encourage students to nudge friends and family to vote. And they’ve held voter registration drives and placed voter registration drop boxes across campus, such as at locations of the Corp or the Georgetown Scholars Program office, which serves students who are low-income and first-generation college students.

Sarah Bryant (SFS’22), the former director of outreach for GU Votes, said the student-driven initiative aims to make voting a part of campus culture, and she felt encouraged to see Georgetown’s high voting numbers reflect this.

“It was an affirming moment as a senior to say, I’ve gotten the incredible chance to invest in this program and see it pay off,” says Bryant. “I think the fact that Georgetown students are so engaged should be really encouraging to the campus administration, to students, to everyone who thinks that voter engagement and civic engagement is a critical part of the Georgetown campus culture.”

“Georgetown focuses on putting what we’re learning here into practice, and voting is one part of that.”

“Of all the programs we’ve launched out of GU Politics, there’s none I’m more proud of than GU Votes,” said Mo Elleithee, founding executive director of GU Politics. “These students have built something super special, putting their partisanship aside to help increase student voter participation. They’ve created a model that hasn’t just been successful at Georgetown, but is being noticed and recognized nationally. They set out to get more Hoyas involved in the democratic process, and they are simply crushing it.”

As for Grass, he’ll be joining GU Votes volunteers and students to walk to the polls on election day. He said he feels optimistic about voter turnout this year.

“We’ve established ourselves as a trusted, nonpartisan source on campus for all things voting,” he says. “We’ve continued what we’ve done in the past and we’re also building on it, and we hope through it all, that we’ll see as high numbers as we did in 2020.” 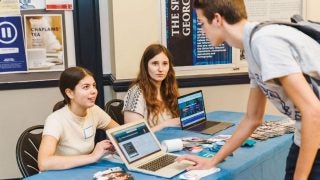