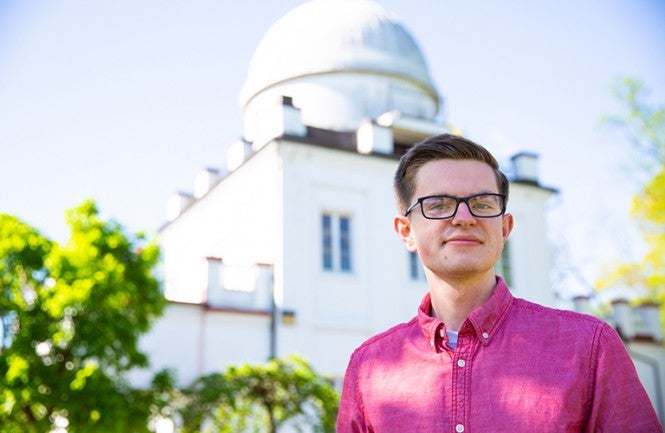 Micah Musser (C’19), a government major in Georgetown College, examines the relationship between nature and technological development. He hopes to one day pursue a career in academia.

“I primarily study the relationship of liberal political theory to nature and the environment on the one hand and technology on the other,” says the graduating senior.

Musser has pursued his independently directed research and used research grants over the course of two summers.

Most Influential Class: Plato and Nietzsche with government professor Joshua Mitchell, an expert in the relationship between political thought and theology in the West.

“I had already become increasingly interested in political theory as a freshman, but that course really showed me the scope of questions political theory could deal with – questions that ranged from humanity’s place in the universe to the necessity of truth for political institutions,” Musser explains.

A Professor’s View: Mitchell describes Musser as an admirable mix of intelligence, poise and leadership ability.

“I think it’s important to note that he is trying to think through our relationship to nature in new ways,” says Mitchell, chair of the government department and associate dean of faculty affairs at Georgetown Qatar. “Rather than arguing from the ‘outside-in,’ about how nature constrains us, Micah argues from the ‘inside-out,’ about how our own mixed up prejudices produce the impasse with nature in the first place.”

Campus and Community Activities: The Georgetown senior serves as president of the Tocqueville Forum Student Fellows and as an editor for Utraque Unum, Georgetown’s undergraduate humanities journal. He also helped organize the Georgetown Renewable Energy and Environment Network (GREEN) and volunteers for DC environmental causes.

Advice for Other Students:

Musser started Georgetown aiming to be an environmental lawyer, but now believes he will do far more significant work as an academic.

“Try to find something – an idea, a question, or a concern – to center your intellectual life at Georgetown, but be open to changing what that center is as you change.”

Favorite Spot on Campus: He loves thesmall koi pond next to White-Gravenor and the woods of Glover-Archbold Park behind the Francis J. Heyden Observatory.

“Both are incredibly peaceful locations where someone can sit back,” he says, “and spend some time thinking without interruptions.”