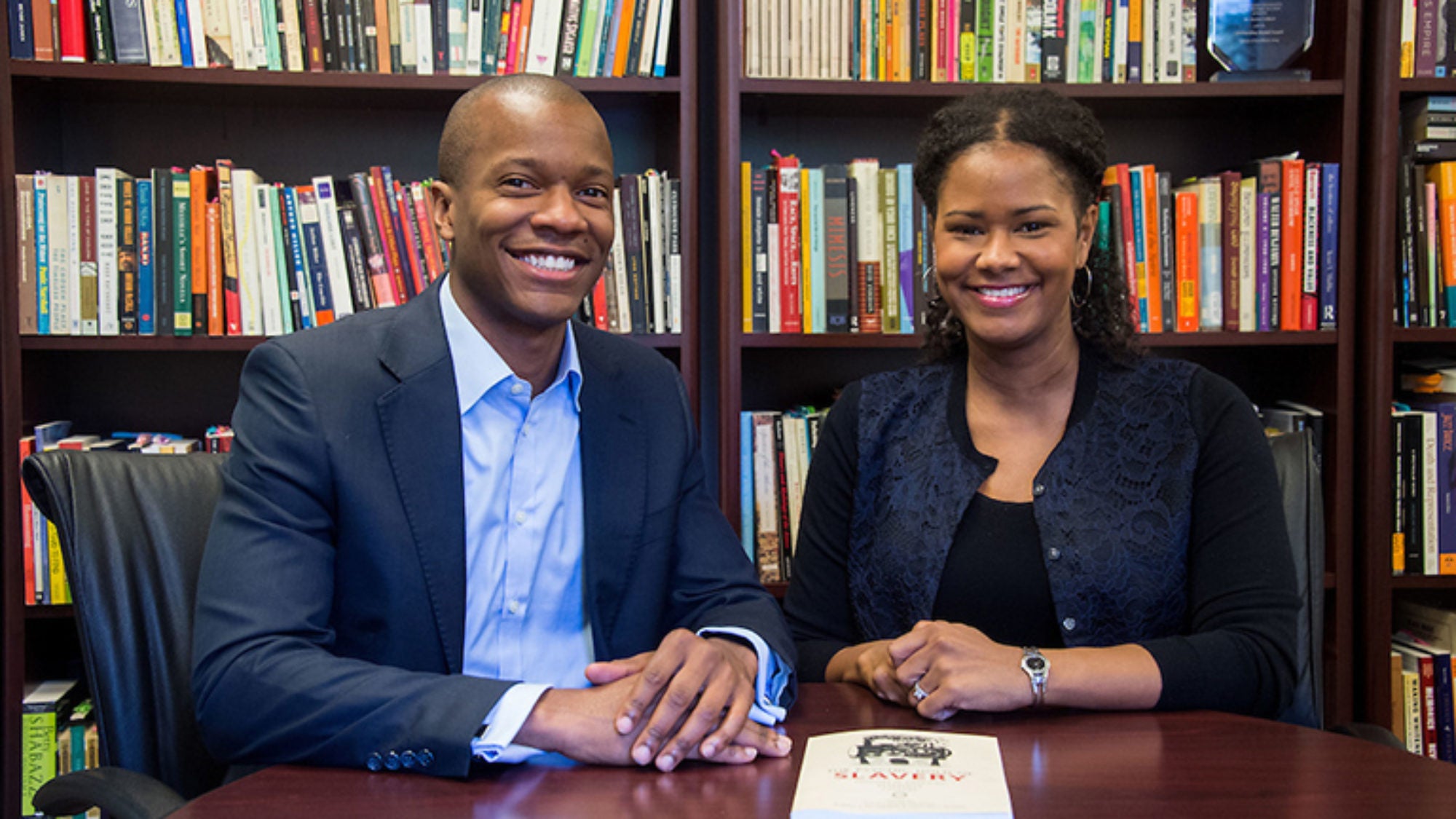 Georgetown professors Soyica Diggs Colbert and Robert Patterson hope their new book will spark conversations about how the American legacy of slavery informs a present in which African-Americans experience ongoing and increasing racial inequity and violence.

The violence of recent months, including the police shooting of unarmed African Americans such as Alton Sterling and Philando Castile, are symptoms of the psychic hold of slavery, say Georgetown professors Soyica Diggs Colbert and Robert Patterson.

Two Georgetown professors are hoping their new book, The Psychic Hold of Slavery: Legacies in American Expressive Culture (Rutgers University Press, 2016), will spark conversations about how the American legacy of slavery informs a present in which African-Americans experience ongoing and increasing racial inequity and violence.

“There’s no moving forward as a community, not just black people, but everyone in America, unless we can talk about the legacy of slavery,” says co-editor Soyica Diggs Colbert (C’01). “If we can’t have a frank conversation about the reality of where we began, how can we move forward?”

The book features essays by African American studies scholars who explore how film, drama, fiction, performance art, graphic novels and philosophical discourses represent or fail to represent slavery, and the relationship of slavery’s legacy to the 21st century. 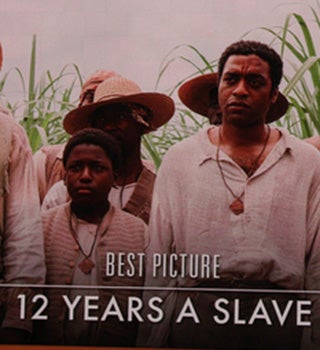 “There is a conversation being staged across cultural media that speaks to the way in which black cultural production’s preoccupation with the historical era,” says Patterson, who authored the book’s conclusion and a chapter on the 2013 film 12 Years a Slave. “What we want to draw attention to is how slavery’s legacy impacted ideas about blackness, black people, black lives, and still governs how people think about black people in the twenty-first century.”

In his essay “12 Years a What?” Patterson argues that analyses of the film “continue to deny the historical continuities between different disenfranchisements then and now.”

“They continue to situate black people’s lack of housing, education, and employment opportunities as solely consequences of their own actions and inactions,” Patterson contends. “They ignore the significance of nihilism as an inherited psychological barrier that impedes progress and refuse to acknowledge how shifts in global capitalism have disproportionately truncated black people’s social and economic mobility.”

Patterson says this is why African Americans can’t just “get over” slavery, and “why all Americans might benefit from seeing such films, even if they do not want to.” 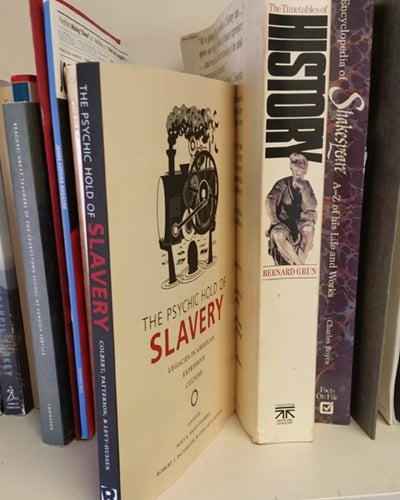 Colbert, also the author of The African American Theatrical Body: Reception, Performance and the Stage (Cambridge University, 2011), takes on Spike Lee’s 2000 film Bamboozled in her essay, noting that the film “demonstrates how the history of commodity and cultural production in the United States circumscribes blackness in the twenty-first century and limits black people’s ability to upset the governing norms of racial misrepresentation.”

The professor and alumna, who came to Georgetown in 2013, says many recent and pending films and television shows depict slavery – including 12 Years, the remake of the original Roots series, John Legend’s Underground series, the movie Free State of Jones and a film on Nat Turner coming out in the fall.

Colbert says the recent productions draw attention to the reality of the brutal violence of slavery as well as a focus on resistance, as in the Nat Turner and Free State of Jones films.

“Because they are giving a kind of truth, they must also be offering some insight into what we’re trying to understand, say, feel, work through in our contemporary moment,” she says. “Since we finished the book, these movies and shows coming out this summer or fall seem to testify to the fact that there’s this national conversation going on that we need to have.”

The violence of recent months, including the police shooting of unarmed African Americans such as Alton Sterling and Philando Castile, are symptoms of the psychic hold of slavery, the professors say. 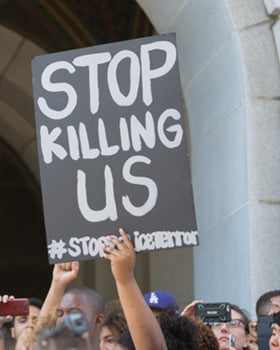 “We are hoping to help generate the conversation around the specific, tangible, unconscious, implicit, macro, micro ways that slavery informs the contemporary moment,” says Patterson, author of Exodus Politics: Civil Rights and Leadership in African American Literature and Culture (University of Virginia Press, 2013) “and we also want to have an equally as important conversation about how to undo the influences that have been unproductive.”

Colbert says the authors of The Psychic Hold of Slavery are not implying that there is no difference between the racial problems of 2016 and those of the 18th, 19th and 20th centuries.

The FBI investigation into the Ferguson, Missouri police department following the killing of unarmed Michael Brown showed that there were systems in place that allowed the shooting to occur, the professor says.

“The federal investigation tells us that we got here through these structures that were implemented on a daily basis,” Colbert says. “What I’m trying to think through now, is how do you push back against those daily securing of those structures before we get to a moment of crisis.”

Part of pushing back, she says, is “not letting the small things go” and having African Americans understand the structure of as well as serve on city and town government councils.

Both professors say they have personal experience with the psychic hold of slavery. 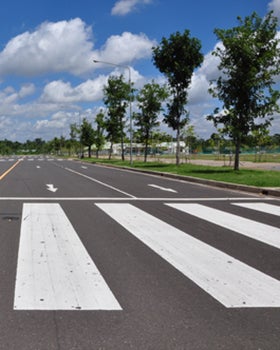 Colbert says her husband noticed that lately she always walks inside the lines when crossing the street. She realized she was doing this because of an incident last year in which Arizona State University (ASU) English professor Ersula Ore was slammed to the ground by a white ASU police officer because she was jaywalking.

The Georgetown alumna also says white people are often surprised she is a tenured professor at a top university and that she is asked to explain and legitimize herself in ways that a non-white professor would not.

Patterson was disturbed that a white woman he encountered in a recent fender bender asked him if he had car insurance.

When he asked her if she inquired because he is black, she denied it, saying she would ask anybody that question. “I said, ‘but I’m not anybody and you asked me,’ ” he told the woman, but she continued to assure him that nothing was amiss.

He says he also gets mistaken for an employee in places like Target and Bloomingdale’s, despite clearly not wearing the uniforms that workers wear in those stores.

“Slavery helped to congeal ideas about black people and where they are positioned in terms of power, economics, opportunities and access,” he says, “and those ideas are still playing out.”

The professors are hopeful, however, about the next generation.

Patterson says students in his Race and Racism class this past fall are eager to know what they can do to combat racism. 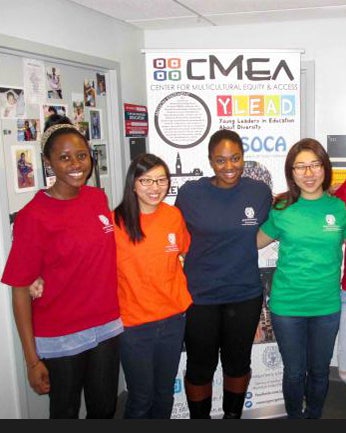 “Georgetown or any college or university is unique in the sense that it’s integrated,” she notes. “Most places in the United States are not integrated along race, class, geographical lines. Just given that reality, what kind of world can we make if we actually engage with people, who just statistically, the probability of us living in the communities with these people again are very low?”

Both professors are part of Georgetown’s Working Group on Racial Injustice, which Patterson chairs, and are looking forward to the pending recommendations of the university’s Working Group on Slavery, Memory and Reconciliation, which is addressing how best to acknowledge and recognize Georgetown’s 1838 selling of 272 slaves to plantations in the Deep South to erase debt.

“Acknowledged or not, slavery matters, as does its psychic hold,” Patterson writes in the book’s conclusion. “It is also true that black lives matter – except when they don’t, an exception that emerges all too frequently.”