Grace Maglieri (C’19) has received two awards – one for this past summer and another for this academic year – from the Clare Boothe Luce Program, which supports women conducting research in the natural sciences, math, computer science and engineering. Only 13 schools, including Georgetown, are guaranteed funding from the program, and only a select number of undergraduates receive such awards.

The research: Maglieri has worked in the lab of physics professor Edward Van Keuren since her first year. Her research uses a special type of dye to calculate the parameters of interaction for solvents, polymers and powders, in order to predict interactions between those chemicals and choose components for optimal use. 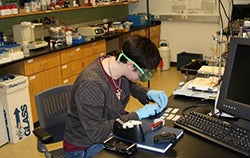 “Research into the properties of different chemicals allows one to predict interactions between multiple chemicals,” Maglieri says. “This could have a significant effect on industry, which often uses complicated mixtures of chemicals. With these parameters, they would be able to improve the mixtures to benefit the production and quality of the materials.”

How will the award help your research career?

“Thanks to the support of the Clare Boothe Luce Summer Research Scholarship, I was able to continue my research over the summer and through my senior year. This gave me a strong foothold in the research, having obtained data that will focus my senior thesis efforts.”

What attracted you to Georgetown?

“Georgetown has strong programs in the physics and Russian departments. I felt it would be the right environment, and I appreciated the idea of a supportive college community. I was also able to speak with the physics department, and I was eager to learn in that setting.”

How did Georgetown support you? Maglieri has participated in the Georgetown Undergraduate Research Opportunities Program (GUROP) over three summers.

“Grace has made substantial contributions to a number of projects in my lab,” Van Keuren says. “Her success shows the benefits of getting our undergraduates involved in research early so they can apply class lessons to real-life problems. We are also very appreciative of the Luce Foundation for supporting students like Grace to follow their aspirations to become scientists.”

“I hope to obtain a Ph.D. in physics and pursue a career in research.”

How do you feel about a woman having recently won the Nobel Prize in Physics?

“I am grateful whenever someone’s contributions are recognized. Donna Strickland’s work has opened the door for many advancements in laser technology. I hope that this recognition of her achievements is part of a trend toward recognizing accomplishment without discrimination.”