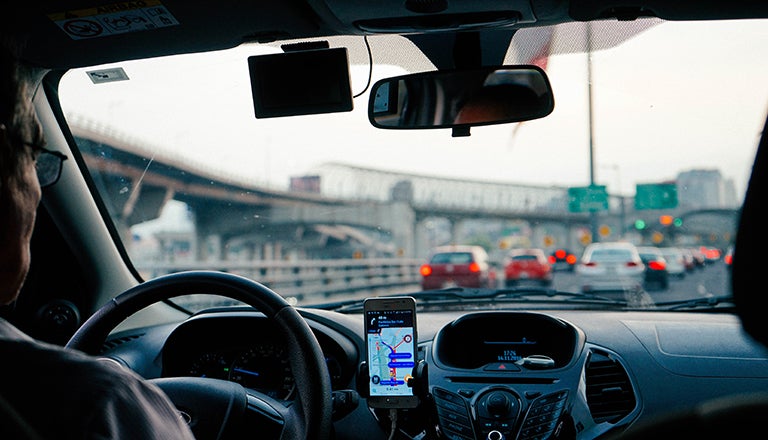 A new Georgetown report identifies a set of challenges that the on-demand, ride-hailing industry poses for drivers.

Ride-hail platform drivers in the region face financial debt, threats from customers, constantly changing rules that make calculating their earnings nearly impossible, and work hours that may make them a public safety hazard, according to a new Georgetown study.

“Our report identifies a set of challenges that the on-demand, ride-hailing industry poses for drivers that we think necessitates action by government officials,” says Katie Wells, a postdoctoral fellow with Georgetown’s Kalmanovitz Initiative.

Wells presented the report she co-authored and its recommendations to the Council of the District of Columbia today.

“Our report identifies a set of challenges that the on-demand, ride-hailing industry poses for drivers that we think necessitates action by government officials in order to encourage the industry to conform to contemporary labor standards,” says Wells, who serves as principal investigator on the study funded by the Urban Studies Foundation. “While many drivers enjoy working for Uber, these individuals nonetheless deserve the opportunity for fair wages and better working conditions.”

The study, called The Uber Workforce in D.C., is part of a collaborative, ongoing research effort among Wells, Kafui Attoh of the School for Labor and Urban Studies at the City University of New York and Declan Cullen of the geography department at George Washington University to study workplace conditions in the on-demand platform economy.

The researchers conducted extensive interviews with 40 Uber drivers in the Washington, DC area over two years, asking them questions about finances, workplace conditions, education level, household income and other issues.

Recommendations include the creation of a publicly funded commission to study the impact of Transportation Network Companies (TNCs) such as Uber; establishing a prevailing wage for TNC drivers and requiring such companies to share data on their working conditions.

The city council approved a 6% tax on TNC services last year to support Metro and passed a data-sharing requirement for such companies, but the datasets are exempted from Freedom of Information Act requests and currently cannot be accessed in relation to labor standards.

“Data about the number of drivers on the road, the number of hours that drivers are logging, and average earnings need to be collected and shared so that regulators can assess the impact of TNCs on the city,” Wells says.

Wells also notes that the Uber workplace is “so full of gamification elements that it resembles a casino in which the gamblers – the drivers – often lose.”

“Incentives and rules can literally change by the hour and involve so many variables that drivers need more than a dozen data points to even begin to calculate earnings,” she adds.

All of the drivers said they had difficulty calculating earnings, while 32% reported Uber work-related debt and 30% reported physical assaults or safety fears. One driver, an Ethiopian immigrant living in DC, discovered that even after 16-hour workdays, he didn’t earn enough to pay his car payments and ultimately had to file for bankruptcy.

Another driver said he refused drugs from a passenger and was subsequently assaulted.

The presentation to the DC Council on April 18 included opening remarks by Council Chair Phil Mendelson and a welcome by Christopher Murphy, Georgetown’s vice president for government relations and community engagement.

“Our goal with this ongoing study is to equip city officials, community organizations and residents with clear data about what is, and what is not, happening to workers in the on-demand, ride-hailing industry,” Wells says.

“Our goal with this ongoing study is to equip city officials, community organizations and residents with clear data about what is, and what is not, happening to workers in the on-demand, ride-hailing industry.”