Okubadejo, a 2003 graduate of Georgetown Law, has provided counsel to colleges and universities on the full spectrum of civil rights protections and once served as an attorney within the U.S. Department of Education’s Office for Civil Rights.

She has run hearings, conducted program-wide reviews and recommended best practices for such institutional efforts to promote civil rights and nondiscrimination.

“It’s a really unique opportunity to be able to give back to my alma mater and be a part of a team that is committed to building an inclusive community,” says Okubadejo, who comes to Georgetown Jan. 27 after more than six years at Ballard Spahr law firm.

The Georgetown alumna’s new role in the Office of Institutional Diversity, Equity & Affirmative Action (IDEAA) will be responsible for some of the duties that were performed by Rosemary Kilkenny, who has served as vice president of institutional diversity and equity since 2006.

Kilkenny’s role expanded this past April when she was appointed as Georgetown’s vice president for diversity, equity, inclusion and as its first chief diversity officer to reinforce a more inclusive environment, in which all members of the university community have the opportunity to succeed and thrive.

“This new associate vice president role allows us to more fully expand institutional efforts to  demonstrate Georgetown’s commitment to diversity and equity and inclusion,” Kilkenny says. “It also affords IDEAA the opportunity to strengthen the university’s capacity to address complaints of unlawful discrimination and harrassment.”

“Bisi’s depth of experience, empathy and passion will no doubt help her succeed in her new role with IDEAA,” Kilkenny adds.

At Ballard Spahr, Okubadejo built out its work on higher education civil rights, regulatory compliance and constitutional matters practice with an emphasis on Title IX discrimination based on gender.

She also has practiced at other major law firms such as Venable and Hogan & Hartson, where she handled labor and employment issues as well as commercial litigation matters.

“I became interested in education soon after I graduated from college,” says Okubadejo, who participated in Teach for America after graduating from Hamilton College in Clinton, New York. “I actually taught in the Baltimore City Public Schools system that my mother and family members attended when the schools were segregated.”

She says that experience motivated her to pursue law school and focus on creating equitable outcomes for not only students, but also society as a whole.

“I have three children, and they are a really important part of my life,” she says of her 9-year-old son and 7-year-old twin son and daughter. “I believe deeply in making sure that everyone can learn in an environment that is free of discrimination.” 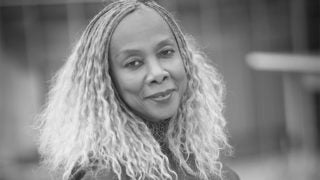