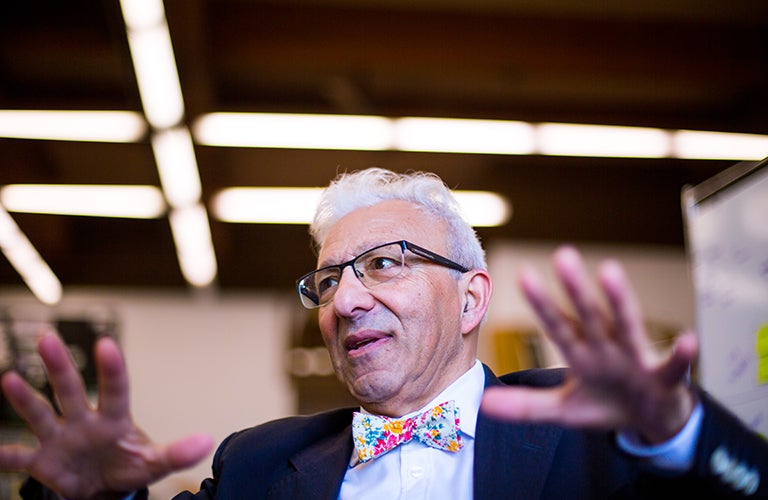 A new book by psychology professor Fathali Moghaddam says crisis incidents have the potential to turn a democracy into a dictatorship, even in a country like America.

Crisis incidents have the potential to turn a democracy into a dictatorship, even in a country like America, a Georgetown professor contends in his latest book.

Psychology professor Fathali Moghaddam’s Threat to Democracy: The Appeal of Authoritarianism in an Age of Uncertainty (American Psychological Association, 2019) examines what he sees as an international decline in democracy, including in the United States.

“If you have a large enough crisis incident, people could be frightened enough to say, ‘We can’t have Congress and the Supreme Court and the free press restraining the administration’s power,” he says. “That’s how the United States could become a dictatorship, as suggested by psychological research.”

The book paints the typical dictator as creating crises that make people feel threatened and helpless and then presenting himself as the only person who can save the nation.

The dictator then attacks institutions and individuals that have the power to constrain him. Such “crises incidents” in the past have included the Iran hostage crisis that swept Khomeini to power and the 2016 coup that brought Erdoğan to power in Turkey.

“We’ve already got fierce attacks on the free press in America,” the professor says. “As well as attacks on the Federal Reserve and the Supreme Court.”

Though democracy first developed in Athens about 2,500 years ago, Moghaddam says there have been ups and downs throughout history. “We’ve had periods when we’ve gone backwards,” he says. “And at the moment, both in Western and non-Western societies, we have a period of going backwards.”

The psychology professor sees the rise of perceived threats, such as associated with globalization and mass migration, as underlying the global rise of anti-democratic strongmen.

Moghaddam examines the psychological aspects of authoritarian leaderships across the globe and provides solutions in his book, one of four on the subject since 2013.

In cases where a dictatorship falls, he explains, there is a small window of opportunity to move people toward democracy.

“As a psychologist, I’m interested in what I call political plasticity, which refers to how much and how fast we can change our cognition and behavioral habits,” he says.

Creating an unrealistic democratic constitution and trying to get people to change too quickly often results in a backlash that brings a dictatorship worse than the one before, the professor explains.

“We see again and again in history, that revolutions such as the Arab spring fail to make rapid progress towards democracy,” Moghaddam says.

“We need more civic engagement and civic education,” Moghaddam adds, “and we need to strengthen local activism. We’ve got a lot of emphasis at the moment on national efforts, but we also need to get down to the local level. Resistance through local activism is often the most successful.”