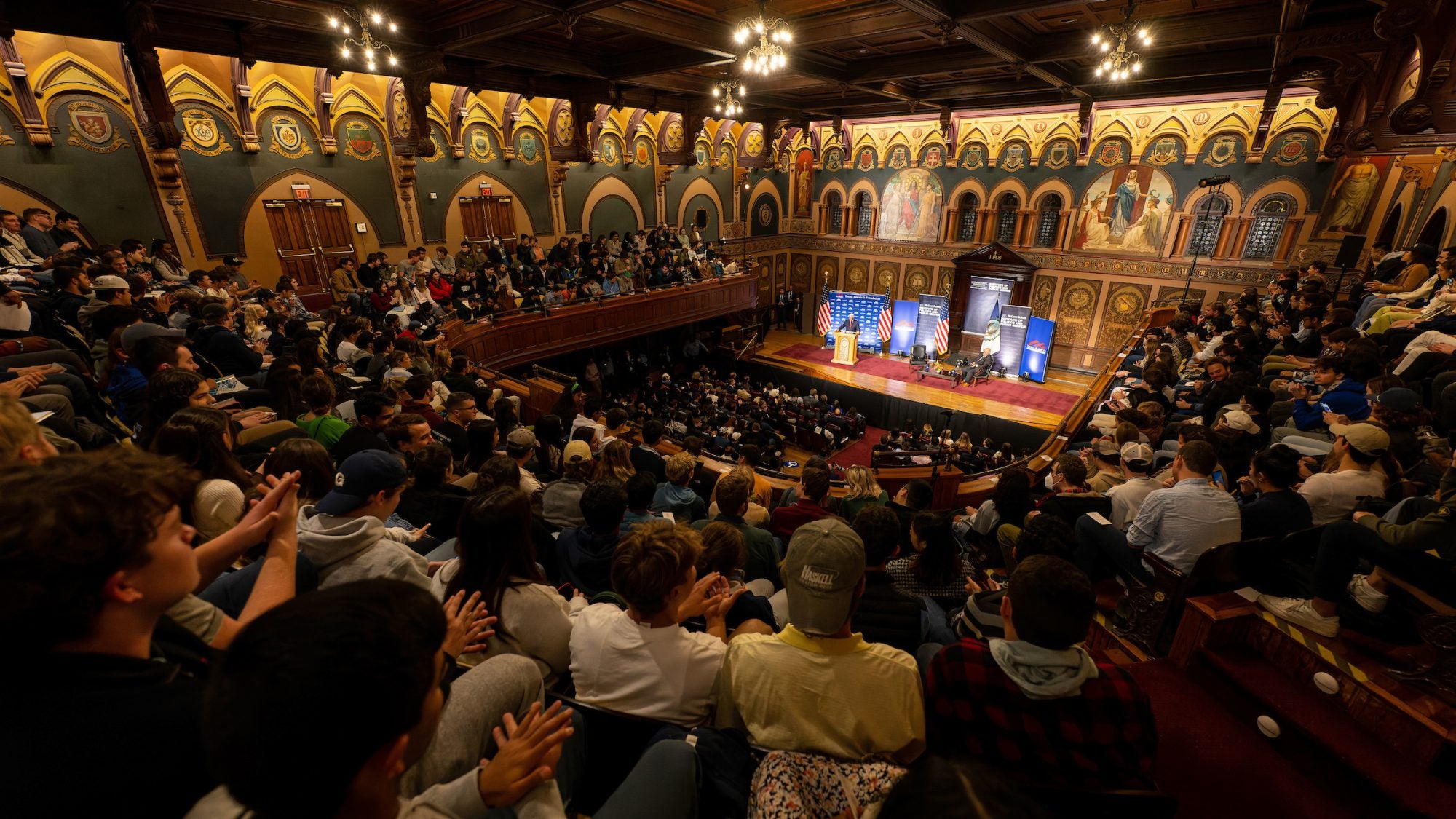 In just this past month, Georgetown students have engaged with former heads of state and sitting secretaries and ambassadors — including Secretary Pete Buttigieg and former Vice President Mike Pence — eager to speak to young people about the state of our country, world and shared future.

As a research university committed to academic inquiry and free speech and expression, all speakers visiting campus are required to take questions from Georgetown’s community, which means that students do not just hear from global leaders — they are able to actively engage with them on the world’s most pressing challenges.

Dialogue — particularly among those with differing viewpoints — is central to Georgetown’s Jesuit mission of forming people for others who are committed to justice and appreciation for each individual’s unique contributions. And Georgetown’s location in Washington, DC, makes it a frequent stop for prominent political, business and cultural leaders interested in advancing this dialogue.

Learn about the conversations students have had with prominent policymakers who recently visited the Hilltop, from sustainability to bipartisanship and global women’s rights — and how these global leaders responded.

On October 11, the Georgetown Institute of Politics & Public Service (GU Politics) and Sirius XM hosted U.S Secretary of Transportation Pete Buttigieg for a town hall about the Bipartisan Infrastructure Law that was signed into law last year. 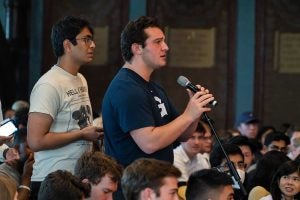 Chris LoPresti (C’25): There was a lot of money in the infrastructure bill and Inflation Reduction Act for a network of charging for electric vehicles (EVs) and tax credits for purchasing vehicles, but still these vehicles are way too out of the price range for average middle class Americans. So my question is: What will it take to bring those prices down, and how far in the future do you think that could become likely?

Pete Buttigieg: So this is incredibly important because actually the more pressed you are in terms of your income, the more you theoretically could benefit from having an EV in saving the gas bills, but only if you can afford it in the first place. And the key moment we’re looking for economically is when do the cars hit a level of parity with the equivalent gas model or at least get close enough, and we’re actually getting close on some models where, if your car payment’s a little higher because the sticker price is higher on an EV, you still come out ahead because your cost of fueling it is still lower…

The more we can accelerate the production of EVs, especially in the U.S….The more we get those kind of economies of scale where the underlying costs actually start to go down and it becomes naturally cheaper.

Now you might ask why use taxpayer money to make that happen if that’s the destiny of the automotive industry anyway, as we believe it is, and the answer is yes: EVs are almost certainly where cars are going to go with or without us, but three things are not certain: will it happen quickly enough to help us fight climate change like we need it to, will it happen in a made-in-America kind of way and, to your question, will it happen in an equitable fashion so people who could really benefit from it the most can actually afford to get in on it? Those things don’t necessarily happen on their own. That’s why policy is needed, and that’s what we’re doing through the Inflation Reduction Act.

Hear more from Buttigieg and Georgetown students on the GU Politics YouTube page.

On October 19, GU Politics in partnership with the Young America’s Foundation welcomed former Vice President Mike Pence, who shared his thoughts on the future of the conservative movement in the United States. 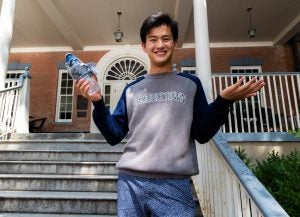 Bennie Chang (SFS’26): In the past couple of years, we’ve seen polarization increase so much, and one of the most difficult things to see is how conflicted and how antagonistic our whole country has become. One of my favorite things is seeing the bridging between Republicans and Democrats…So this is a question similar to the 2016 presidential debate between Donald Trump and Hillary Clinton: What is something that you like about Joe Biden and Kamala Harris?

Mike Pence: I’ve known President Biden for a long time. He was in the Senate when I was in the House, we served together on conference committees, and we frankly always had a good relationship. When I was governor of Indiana, he was vice president. We worked together. Indiana actually introduced the first consumer-directed health care in Medicaid, and we negotiated with the Obama-Biden administration to do that and expanded health care to tens of thousands of Hoosiers that wouldn’t otherwise have it, but we did it with free market principles.

I will also say that when I was elected vice president during the transition, President Biden, Jill were very, very gracious to us, and I’ll always be grateful for that. I can’t identify a policy that I agree with in the Biden administration, but again, I think you can say that somebody’s ideas are bad without saying they’re a bad person.

And I remember the day that Kamala Harris was tapped to be Joe Biden’s running mate, and I called her from Air Force Two. I think she was a little surprised, but I just told her, ‘Senator, I got that call once…I want you to know we’re going to be praying for you and your family in the days ahead.’ I’ll never forget she said to me, ‘Mike I really appreciate the spirit of this call.’ We had our own spirited debate on national television, and we had barriers between us, but they weren’t tall enough to even stop a fly [applause], and we got strong differences…but I literally respect everyone, every man or woman — I don’t care what your politics are — if you’re willing to stand up and put your name on a ballot because you love this country, you have my respect.

Hear more from Pence and Georgetown students on the GU Politics YouTube page.

As part of the Symposium on Diplomacy celebrating Madeleine Albright, Melanne Verveer, executive director of the Georgetown Institute for Women, Peace and Security, moderated a conversation with Wendy Sherman, U.S. deputy secretary of state, and Linda Thomas-Greenfield, U.S. ambassador to the United Nations. 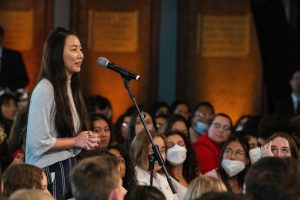 Channing Lee (SFS’23, G’24): What are some challenges that you’re facing currently as a woman, and what advice do you have for our male colleagues to support women moving forward?

Linda Thomas-Greenfield: First, to our male colleagues, you have to own this as well. I hope that whenever you walk into a room filled with only men and particularly if it’s a room filled with only white men, that you feel uncomfortable, and you take on the responsibility to change that because we as women can’t do it by ourselves. We have to have the support of our male colleagues as well to bring about change, and so many have supported that.

And then for women, for me, I had kind of a two-pronged issue. I am a woman, and I am Black…Own your room. When I walk into a room, I’m not walking into a room as a Black woman. I’m walking into the room as the permanent representative of the United States of America, and people better understand that that’s who I am.

Hear more from Thomas-Greenfield and Georgetown students on the SFS YouTube page.

Jake Sullivan on Protests in Iran 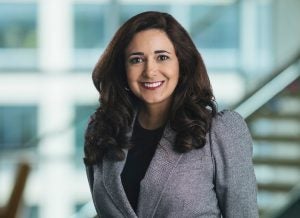 Feryal Faramarzi (G’19, G’24): I was born and raised in Iran and now I’m a U.S citizen. I want to thank you for amplifying the voice of Iranian women and Iranian protesters in the street. I know it means a lot to them, people who are fighting with bare hands and with nothing to fight for their freedom.

You mentioned in your comments on Twitter that you will hold responsible people of the government of Iran for their actions against the protest. Could you clarify, what does ‘holding responsible’ mean?

Jake Sullivan: So, first, accountability is partly about again shining a spotlight on this behavior. It is about calling it out in plain and stark terms, which President Biden and those of us in the administration have done.

Second, it is about imposing costs — not just sanctioning Iran as a country, but sanctioning the individuals and the entities that are responsible for the crackdown and the repression, and the Biden administration has imposed a round of sanctions on the morality police and on other officials of the Iranian government who are participating in these crackdowns.

And then, of course, there is the part of this where the United States needs to take affirmative steps as well, and what we have done is issued from the Treasury Department a new set of guidance that facilitates and removes obstacles to the provision of communication technologies, apps and the like, so that the Iranian people can communicate with one another and communicate with the world. So that is what the United States has done thus far. That doesn’t mean that we can stop every bullet or hold back every baton, but we are going to show where we stand on this issue and take the practical steps available to us. That has been the resolute determination of the president and our administration from the moment these protests broke out, and it will continue.

Hear more from Sullivan and Georgetown students on the SFS YouTube page. 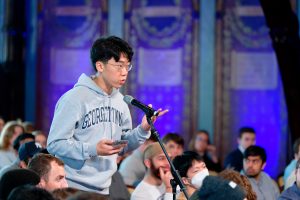 Haan Jun (Ryan) Lee (SFS’26): You mentioned earlier approximately $300 billion spent to aid certain countries, but oftentimes these aren’t free loans, and often the IMF has come under scrutiny for worsening economic crises by putting countries in more debt. In the modern context, how is the IMF using these funds to ensure that countries don’t get caught up in this endless cycle of debt and instead actually result in actual, practical growth?

Kristalina Georgieva: What we do with our programs is to try to minimize what we lend and maximize what we bring as a package of support from others, in particular for low-income countries, grant support. I’ll give you an example. We are currently discussing a program for Malawi. The country is in a very difficult situation. What we want to see is the World Bank coming up with grants, bilateral donors coming up primarily with grants because Malawi cannot take up more debt than it is already in and that is already not sustainable. We do lend. Why? Because by putting money on the table, we say to all these others it is okay for you to come, this country is taking the right turn on policies.

I also would say something that often is ignored: What are we? We are a lender of last resort. In other words, if countries cannot borrow from anybody else, they come to the fund. Well, when you’re a lender of last resort, you’re lending to a borrower in a very difficult situation. In other words, the risks are much higher than they would be for a country that can access private capital. And this is something that sometimes the public undervalues — that when we take more risk, of course it may not work. The political will may disappear, our program may not be anchored well, but should we then say, ‘oh, well, you know, we stay out of it?’ No. Our job is to be there, and, as I said, to bring others to create this anchor of trust for the country.

Hear more from Georgieva and Georgetown students on the IMF YouTube page. 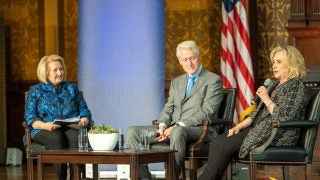 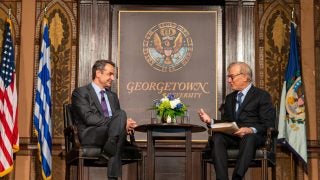 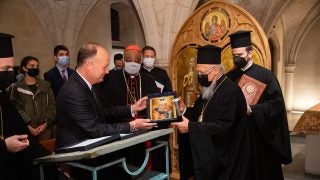