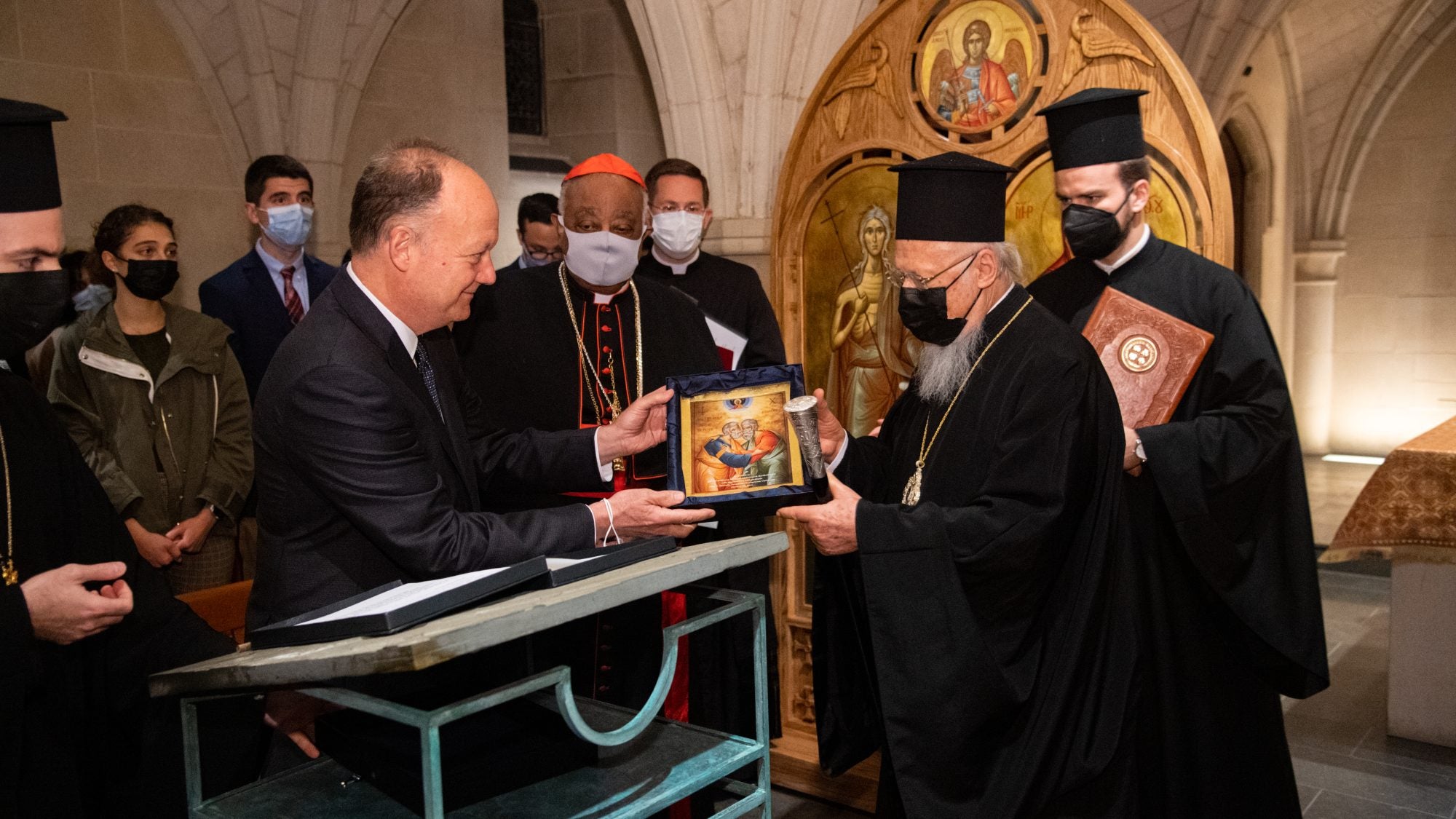 His All-Holiness Ecumenical Patriarch Bartholomew, Archbishop of Constantinople-New Rome and senior hierarch to more than 250 million Orthodox Christians worldwide, promoted interfaith unity and collaboration during a historic, ecumenical visit to Georgetown on Monday, Oct. 25, as part of his 12-day U.S. tour.

“We have a special connection to this marvelous institution,” the Ecumenical Patriarch said during a later dinner at Georgetown. “We would like to add a heartfelt expression of our appreciation for Georgetown and its ongoing role in the intellectual and spiritual formation of so many.”

The Ecumenical Patriarch is the 270th archbishop of the Orthodox Christian Church, founded by the apostle Andrew in A.D. 36 in Byzantium, now Istanbul. Elected in 1991, the Ecumenical Patriarch has worked closely with international political and interfaith leaders to advance religious freedom, human rights and environmental protection.

As a Catholic and Jesuit institution rooted in ecumenical and interfaith dialogue and respect for all faith traditions, Georgetown is “deeply honored to be joined by the Ecumenical Patriarch,” President DeGioia said during his dinner address.

“As we celebrate this special occasion, we recognize both the presence of our Orthodox community here at Georgetown and the strength of our Jesuit tradition, which calls us into engagement across faith traditions. We gather this evening together in dialogue and friendship, seeking to build and strengthen our relationship with one another.”

During the ceremony at Copley Crypt Chapel, President DeGioia presented the Ecumenical Patriarch with a plate that depicts St. Andrew, the apostle to the East and the forerunner of the patriarch of the Orthodox Christian Church, embracing his brother, St. Peter, the apostle who became the first pope of the Roman Catholic Church. The plate mirrors an icon newly installed on a Crypt wall symbolizing religious unity.

The Ecumenical Patriarch discussed the symbolism of his friendship with Pope Francis and ongoing collaboration on environment and human dignity issues. He subsequently blessed each of the students gathered in the Crypt.

Later in the evening at an on-campus dinner, the Ecumenical Patriarch was introduced by Michael Psaros (B’89), a member of Georgetown’s Board of Directors and vice chairman of the Executive Board of Advisors of Georgetown’s McDonough School of Business. Psaros is also an Archon, or honoree, of the Ecumenical Patriarchate, and a member of the Order of St. Andrew, where he serves on its National Council.

In his remarks, Psaros announced a $3 million gift to endow the “Ecumenical Patriarch Bartholomew Orthodox Chaplaincy at Georgetown,” endowed by the Michael Psaros family. The chaplaincy will support a full-time Orthodox chaplain to serve the pastoral and spiritual needs of the university’s growing Orthodox Christian student community. The chaplaincy endowment is the first fully endowed chaplain’s position in the university’s Campus Ministry program.

Psaros’ gift complements the $250,000 gift he made in 2019 to renovate Copley Crypt, the campus sacred space where Orthodox Christian vespers, liturgies and Catholic Masses are held. This gift included funding for the icons and iconostasis in the crypt.

“This endowment will result in the very tangible presence of the Holy Orthodoxy at the University for centuries to come,” Psaros said. “Georgetown University is now in possession of a patriarchal chaplaincy, in the name of Bartholomew, the longest serving Ecumenical Patriarch in history and the most consequential in modern history,” he said.

“As the Orthodox Chaplain at the oldest Jesuit, Catholic University, I was honored to witness the Ecumenical Patriarch’s symbolic visit to our chapel, and to be part of his advocacy for interreligious dialogue and greater cooperation among people of faith,” he said. “The endowment also brings fresh attention to the importance of ministering to the spiritual needs of students and their formation as genuine Christian leaders for the future.

“This new chair will in the years to come provide ongoing energy to our ecumenical work of reconciliation and mutual understanding,” the Ecumenical Patriarch said. “And this is because Georgetown is more than a foundational and exemplary academic institute,” he said during his dinner remarks. “Georgetown is a microcosm of the world and how we choose to interpret it.”

During his invocation at dinner, the Ecumenical Patriarch shared his support for Georgetown addressing issues of slavery and racial injustice in its own past, and championed “honesty and truth-telling” in confronting the past and speaking up about current environmental justice and responsibility.

“The past is never completely behind us, and if we are going to advance in freedom, and in pursuit of righteousness, we must deal with the strata that lie beneath us on which our edifices are built,” he said. “Our Ecumenical Patriarchate is committed to the same honesty and truth-telling even when it was unwelcome by worldly powers.

“Our ecological advocacy and witness is not an ephemeral exercise. The entire life of the church is a calling to ecological awareness. It is mandated by the gospel, which commands us to be faithful and wise stewards of all, with which God has entrusted us.”

Known as the “Green Patriarch,” the Ecumenical Patriarch has advocated for environmental protection and responsibility throughout his tenure, organizing summits and partnering closely with international political and religious leaders.

On Oct. 4, he signed a joint message with Pope Francis and other faith leaders calling for world leaders to achieve “net zero carbon emissions as soon as possible.” He also joined Pope Francis at an interreligious gathering in Rome on Oct. 7.

The Ecumenical Patriarch has worked steadfastly to advance reconciliation among Christian Churches and the Roman Catholic Church, unity among the Orthodox Church, and dialogue among Christians, Muslims and Jews. In 1997, he was awarded the Gold Medal of the U.S. Congress in 1997, which had been previously awarded to Mother Teresa.

Prior to visiting Georgetown, the Patriarch met with the Secretary of State Antony J. Blinken, at Georgetown, and later, with President Joseph R. Biden. He is scheduled to meet with other U.S. leaders and will preside at a ceremony to commemorate the St. Nicholas Greek Orthodox Church and National Shrine at the World Trade Center, a shrine to memorialize and replace the only church destroyed during the 9/11 attacks.

Antonia Sames (C’23) who attended the Patriarch’s visit, underscored its importance for members of all faith traditions.

“Growing up in the Orthodox Church all my life, and as an active member of the Church and community, it is an exceptional joy and blessing to welcome His All-Holiness to our academic home,” she says. “As our spiritual father, Ecumenical Patriarch Bartholomew inspires us to strengthen our centuries-old faith amid the challenges of the modern day. Orthodox Christians or not, all members of the Georgetown community can learn from the Ecumenical Patriarch’s emphasis on interfaith dialogue and environmentalism.”