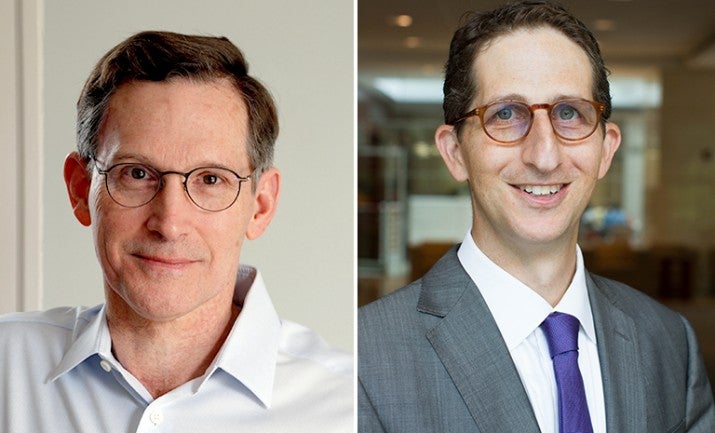 Two Georgetown professors are among the nearly 175 academics, performers and creative artists to receive the 2019-2020 Guggenheim Fellowship.

Richardson plans to use the grant to continue his work on a book about the division of moral labor, while Snyder will use the fellowship to work on a biography of U.S. Supreme Court Justice Felix Frankfurter, called Democratic Justice: Felix Frankfurter, Judicial Restraint, and the Creation of the Liberal Establishment.

The Guggenheim Fellowship is awarded to about 175 academics, performers and creative artists each year for their “exceptional capacity for productive scholarship or exceptional creative ability in the arts.”

Richardson, a senior scholar in the Kennedy Institute of Ethics at Georgetown, examines the intersection of labor, moral responsibilities and injustice.

“The division of labor among morality’s principles is not fixed, but can intelligently adapt to new circumstances,” Richardson says. “It thus becomes important to know which adjustments capitulate to injustices and which ones help mitigate and end injustice.”

Richardson arrived on the Hilltop immediately after earning his Ph.D. from Harvard University in 1986.

A moral and political philosopher who studied under John Rawls at Harvard, Richardson is developing an ethical framework that harnesses people’s ability to rationally reframe deeply held commitments.

Richardson served as editor of the academic journal Ethics from 2008 to 2018 and as a member of a UNESCO ethics commission from 2010 to 2013.

“I am delighted that the Guggenheim Foundation has recognized Professor Richardson’s work, which is so important in how we frame the human condition and what our obligations are to each other,” said College Dean Chris Celenza, a 2008 Guggenheim Fellow.

Snyder received his fellowship in the category of Social Sciences and Constitutional Studies.

“I am thrilled and honored to be a Guggenheim Fellow,” Snyder says. “I stand on the shoulders of Georgetown law professors, past and present, who have received the fellowship and helped me throughout the process.”

He teaches constitutional law, constitutional history and sports law and is author of The House of Truth: A Washington Political Salon and the Foundations of American Liberalism (Oxford University Press, 2017).

Prior to teaching at Georgetown, the University of Wisconsin Law School, Snyder worked as an associate at Williams & Connolly LLP and wrote two critically acclaimed books about baseball, including A Well-Paid Slave: Curt Flood’s Fight for Free Agency in Professional Sports (Viking/Penguin, 2006).

A graduate of Duke University and Yale Law School, he clerked for the Judge Dorothy W. Nelson on the U.S. Court of Appeals for the Ninth Circuit.

“As a constitutional law scholar and historian, I am especially delighted that Brad is being recognized with this prestigious honor,” says Georgetown Law Dean William M. Treanor.

Treanor noted that many members of the Law Center faculty are eager to read Brad’s anticipated biography of Justice Felix Frankfurter.

“We think Brad will write a wonderful sequel to his 2017 book, and we look forward to seeing the result.”