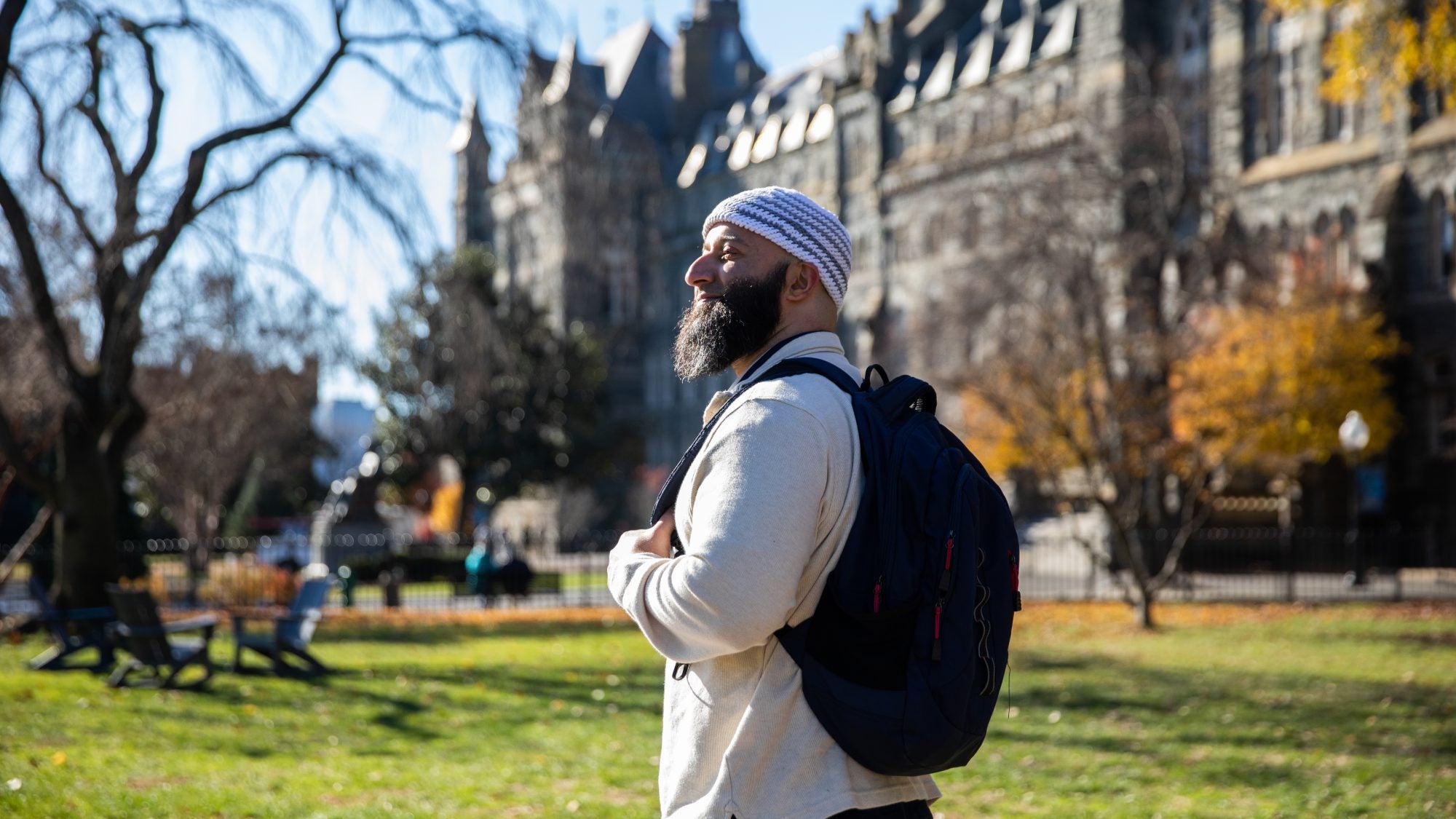 On a sunny, brisk morning in December, Adnan Syed walked up to the front gates of Georgetown University for the first time.

Syed, the subject of the hit investigative podcast Serial, wore a Georgetown T-shirt under his sweater and carried a backpack with a Hoya-stickered binder inside. Like many first-time visitors before him, he looked up at the spires of Healy Hall and its historic clock tower.

“I’ve seen it so many times on television, and to actually be standing here, it’s another moment that’s unbelievable,” he said.

Seventy-two days earlier, Syed had been released from prison after serving 23 years of a life sentence. And now, he was about to start a new job.

On Dec. 12, Syed began work as a program associate for the Prisons and Justice Initiative (PJI), a Georgetown organization that addresses the root causes and consequences of mass incarceration and offers educational programs and training for incarcerated individuals and returning citizens. In his new role, Syed supports PJI programming, including Georgetown’s Making an Exoneree class, in which students reinvestigate decades-old wrongful convictions, create short documentaries about the cases and work to help bring innocent people home from prison.

Syed’s own story was reinvestigated and brought to the attention of millions of listeners after Serial, a podcast from the creators of This American Life, uncovered new details in his case in 2014. Syed had been arrested and wrongfully convicted of the murder of his high school classmate, Hae Min Lee, in 1999. This fall, a judge vacated his life sentence and a month later, prosecutors announced they were dismissing charges against Syed based on newly tested DNA evidence that excluded him. Syed was represented by Erica Suter (L’03), who directs the University of Baltimore’s Innocence Project Clinic, and he was later added to the National Registry of Exonerations.

In the year leading up to his release, Syed had been one of 25 incarcerated students in Georgetown’s inaugural Bachelor of Liberal Arts program at a Maryland prison. In his new job at PJI, Syed hopes to continue his Georgetown education and eventually go to law school. But most of all, he wants to give incarcerated individuals the sense of hope and educational opportunities that he received. He knows firsthand how much it helps.

“To go from prison to being a Georgetown student and then to actually be on campus on a pathway to work for Georgetown at the Prisons and Justice Initiative, it’s a full circle moment,” he said. “PJI changed my life. It changed my family’s life. Hopefully I can have the same kind of impact on others.”

Hope in a Maximum-Security Prison

Georgetown launched its Bachelor of Liberal Arts program (BLA) at the Patuxent Institution in Jessup, Maryland, in January 2022. The program offers incarcerated students an education that prepares them for future success in the classroom, in their careers and in their communities. The 120-credit interdisciplinary program is offered through the Georgetown University College of Arts & Sciences and modeled after undergraduate degree offerings on Georgetown’s main campus, with an emphasis on the liberal arts.

Program leaders expect to enroll 125 students over the next five years. This fall, they welcomed the first mixed-gender class — and the program is believed to be the only one of its kind in the country where incarcerated men and women can earn a degree in the same classroom.

“Adnan’s commitment to the program and to his education was clear from the moment he stepped into the classroom,” said Marc Howard, director of PJI. “We were thrilled to see him exonerated and then be able to welcome him to the Prisons and Justice Initiative. He is one of the most resilient and inspiring people I’ve ever met, and he has so much to offer our team and the other students in PJI programs.”

Syed remembers when he first saw the flier for the BLA program on a bulletin board in prison. He couldn’t believe it was real.

When Syed was arrested in 1999, he was 17. He received his two college acceptance letters in jail. In prison, educational opportunities were slim — especially for someone serving a life sentence. The U.S. government had also cut Pell Grant funding for incarcerated individuals a few years before Syed was arrested.

So when he saw the flier, 22 years into his incarceration, he was curious. A group of his friends encouraged one another to apply, not wanting to miss the opportunity. Syed said the program inspired hope, even for those who weren’t accepted that year. 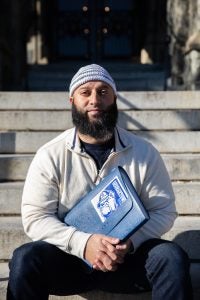 Syed remembers his first day in the classroom well. It was his first taste of college.

“For so many years, all we ever did was just wake up and be in prison. This was the first time that we would wake up and go to a classroom,” Syed said. “What we learned helped us transcend the walls of the prison.

“We went to these places that our professors would take us, like discussions about philosophy in ancient Greece or ancient Rome. For the first time in 23 years, we didn’t feel like we were in prison. We felt like we were college students learning.”

Syed took philosophy, statistics and life writing courses. He learned how to use a laptop; how to annotate and analyze text. He and his classmates transformed their rec room into a study hall. He remembers studying on the rec room’s ping pong table — usually strictly off-limits for anything but table tennis — and debating philosophy with classmates the night before an exam.

When Syed walked out of the courthouse on Sept. 19 to a crowd of photographers, press, family and supporters, a binder with a Georgetown bulldog sticker on it was one of the few things he carried with him. Inside, he kept his statistics final exam (he scored a 98) and other graded papers and tests.

“For me, these are not just my grades or the grades of my classmates,” he said. “They’re a proof of concept that you can take a group of people who are in prison, give them a chance, and they can benefit from it; they can do something great with it.

“It’s beautiful to see lives changing just from someone saying, ‘Hey, here’s a chance. What are you going to do with it?’ So those are the things that I brought out with me, because they meant the most to me.”

At PJI, Syed found colleagues who had been through a similar experience. Colie “Shaka” Long, a fellow program associate for PJI, took courses in the Georgetown Prison Scholars program at the DC Jail and found a sense of freedom in education long before he was released from prison in July.

“I used my education to find my liberation even though I was confined,” he told students in the Scholars program at the recent end-of-semester celebration at the DC Jail. “Four months ago, I was in the same jumpsuit. Being in prison is beyond your control, but being a prisoner is optional.”

Finding Joy in the Daily Grind

On his second day of work at PJI, Syed drove along the Potomac River to his office. He finds joy in small moments like these: The freedom of driving, putting his laptop in his bag; ordering the house sauce at Chick-fil-A; getting stuck in a traffic jam. He feels grateful for the daily grind.

As a teenager, Syed had worked as an EMT. In prison, he worked as a clerk for the chaplain, as an assistant to the volunteer coordinator and in the kitchen. But PJI is his first 9-to-5 office job, and he’s starting with a computer familiarity that ended with Windows ’98. He’s learning, he says.

“I’ve never had a job where I get a chance to be on the computer all day,” he said. “It’s a really normal feeling and an amazing feeling. I’m so grateful for it. Yesterday I was like, I can’t wait to do this again tomorrow, you know?”

A Visit Back to Jail

Despite being imprisoned for 23 years, Syed doesn’t want to shy away from prison work. He’s grateful for the mentorship and guidance he received from older men when he was growing up in prison and from those who returned as guest speakers, teachers and resources. He knows how much their words helped. And he wants to pay it forward.

On the afternoon of his second day, he drove to the DC Jail for the Prison Scholars’ end-of-semester celebration. He was the keynote speaker. Syed was nervous walking in. He wasn’t sure how he’d feel returning to the other side of a jail’s walls. Instead, he found the environment reminded him of being back in the BLA program.

“It was really touching for me especially because I remember what it was like to be 17, 18 years old and to have someone from the outside come in and provide us with support and encouragement,” he said.

In his speech, Syed told students to hold onto hope and joyful moments like these, which can be few and far between in prison. And he told them that by pursuing education, they are preparing for a future outside of incarceration.

“Hope does exist. It’s rare, but it does exist,” he said. “I encourage y’all, applaud y’all and admire y’all. Everything you’re doing now will prepare you for that day.”

At the end of the celebration, Syed turned in his pink visitor’s badge and drove home. 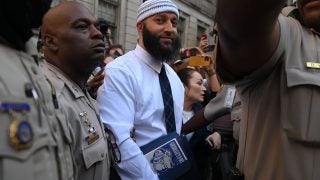 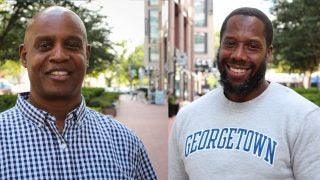 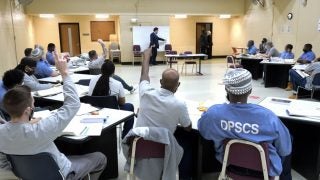