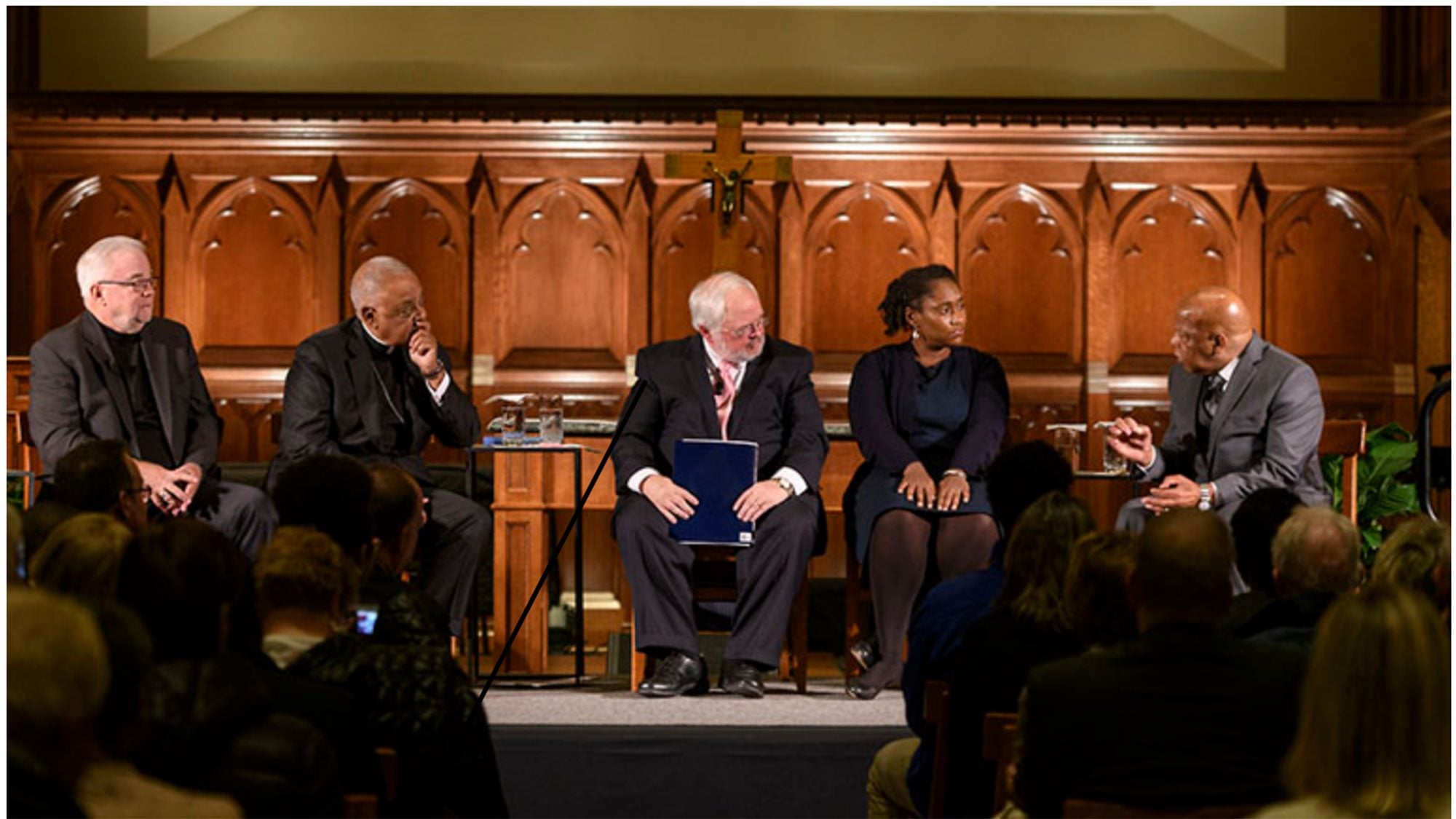 Young people shouldn’t lose hope about fighting against racism, sexism and other forms of discrimination, U.S. Rep. John. Lewis (D-Georgia) told a Georgetown audience yesterday during a panel discussion on “Confronting Racism in our Hearts and in Our Nation.”

Watch: “Confronting Racism in our Hearts and in Our Nation”  With U.S. Rep. John Lewis (D-Georgia)

“We have to give all our people, and especially our young people, our children, a sense of hope and faith that we’re going to make it, that we’re going to overcome,” said Lewis, who marched and worked with Rev. Martin Luther King, Jr. during the civil rights movement. “And tell them not to get lost in a sea of despair or become bitter or hostile, that the way of love is a much better way.”

“Just love everybody,” he added. “You may get arrested and go to jail a few times. You may get beaten or bloody, but you’re making a down payment on building the beloved community.”

The panel also included Wilton Gregory of the Archdiocese of Atlanta, currently the only African American archbishop in the United States; Marcia Chatelain, associate professor of history and African American studies at Georgetown; and the Rev. Jim Wallis, president and founder of Sojourners magazine.

John Carr, director of Georgetown’s Initiative on Catholic and Social Thought and Public Life, moderated the panel, which was sponsored by the initiative and the university’s Office of Mission and Ministry. The event was held in in Dahlgren Chapel in the heart of campus.

“So much of the political and social discourse in our nation has hardened into a rancorous noise,” said Rev. Mark Bosco, S.J., before the panelists were introduced. “With these Dahlgren dialogues we hope that a conversation in the midst of this sacred space might offer a more prayerful posture to engage political, academic and spiritual leaders.”

The chapel was packed with a diverse audience that heard from the university’s president, Bosco and Rabbi Rachel Gartner before the event began.

Wallis, author of the 2016 book, America’s Original Sin: Racism, White Privilege, and the Bridge to a New America, talked about the risks white people need to take in confronting racism, noting how Lewis, who has been arrested nearly 50 times, took enormous risks during the civil rights movement and afterward.

“Where are we going to risk our presence, our privilege, our influence, our wealth, our time, our bodies and our faith in transforming these systems about policing and health care and mass incarceration?” Wallis asked the Georgetown audience.

When Carr asked about the moral problems both religious and non-religious Americans need to address, Chatelain said confronting racism shouldn’t just be the work of religious communities.

“Any member of this community looking at this society has to grapple with the moral question,” she said. “When we decide moral questions are just for the churchy folks we lose sight of the vision that we have and our capacity to see these things through.”

Gregory said every time America reaches a moment in which a “threshold” has been crossed, such as the election of the first black president, there is hope followed by a disappointment when racism and other problems persist. “There was so much hope in achieving that threshold that we confused the achievement of a public event with human conversion,” he said. “And so there’s a disappointment when we find ourselves facing the same issues and sometimes even more complex issues.”

During the discussion Gregory noted that a young white woman mistook him for a staff member while playing golf at a resort in Georgia.

“The inability to read you as anything other than a servant …” Chatelain responded, “if this is kind of where people are at, then their moral imagination to imagine a world without housing discrimination, with equal schools, with health care disparities reduced – they can’t even get there.”

She said when she travels to speak around the country, people ask her what they can do to combat racism and want her to assign them a book.

“I no longer engage in that question,” explained Chatelain, who served on Georgetown’s Working Group on Slavery, Memory and Reconciliation. “I say, ‘It’s more important to think about what you have done. What harm have you brought into the world, consciously and unconsciously? What are the choices that you are making that have caused harm? And after youspend a little time with that, what are you willing to do?’ ”

Carr asked Lewis, as the only activist still alive who spoke at the March on Washington with King in 1963, what the country can do to combat racism today.

“The scars and stains of racism, sexism, and all the others are deeply embedded in American society,” Lewis said. “There must be a revolution of values, a revolution of ideas.”

He said he calls everyone in Congress his brothers and sisters.

“They probably think I’m a little crazy,” he said. “But we are all brothers and sisters. We are all are human. Can’t we just be human beings? One big family blessed by God?”