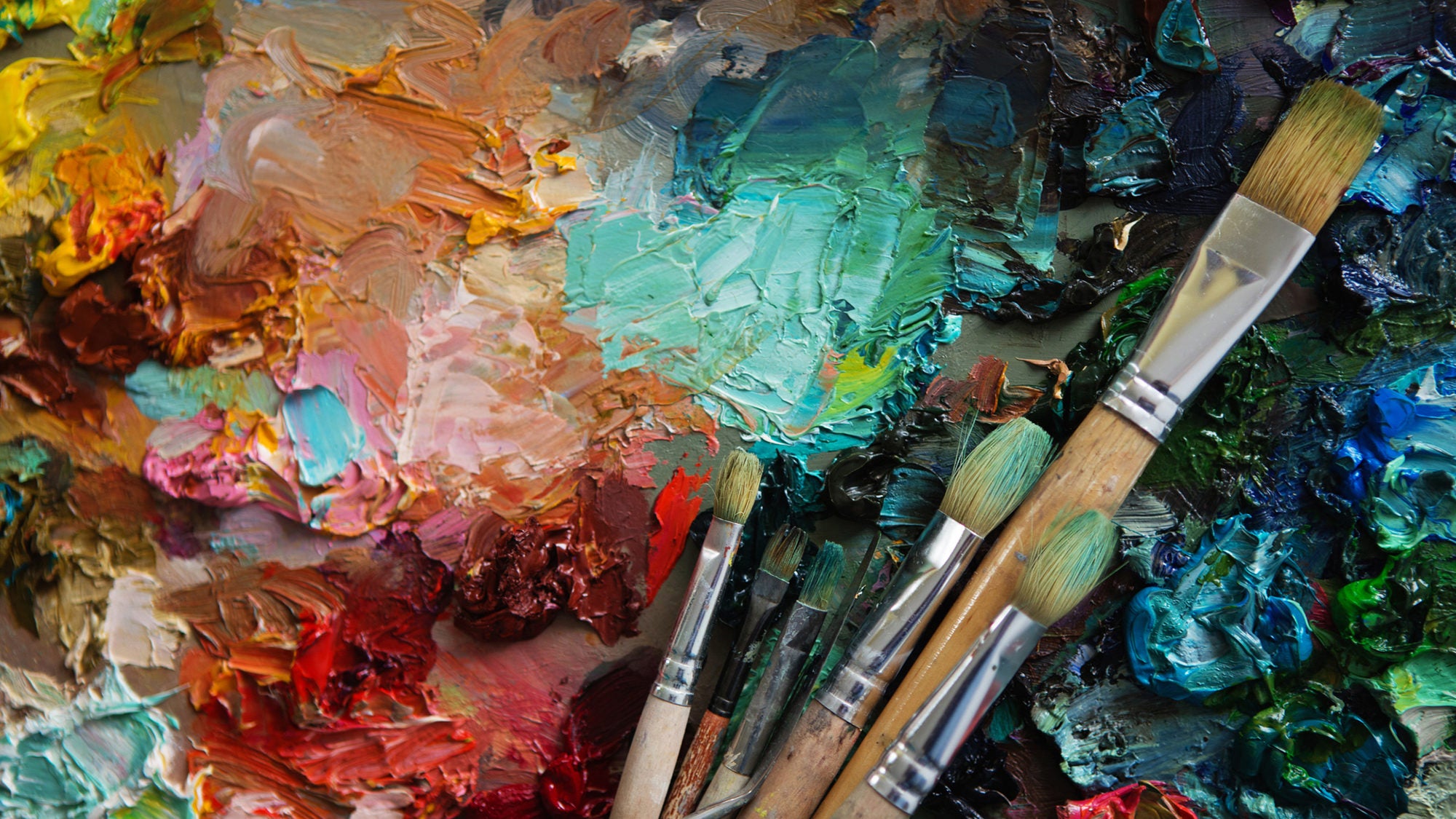 Despite the current pandemic, some art students at Georgetown have continued to paint, draw, sculpt, make videos and study art history. “For many students, art has become a respite or refuge amid the pandemic,” says Al Acres, chair of the Department of Art and Art History. “For others, it seems to have become almost the opposite – a powerful way to be restless – to roam, explore and connect during a time of isolation.” We asked three students to describe how art has played a role in these and other ways.

When COVID-19 closed down the Georgetown campus, studio art major Libbie Blume (C’20) came home to an empty house in Seattle. Her parents had decided to quarantine in Idaho.

“I spent a whole month completely alone and thank goodness for art during that time,” she says. “I painted pretty much nonstop during that lonely month. Painting passed the time and also made me feel like I had a purpose.”

She says her art professors have helped her through this time by being “super supportive and flexible.”

“As long as we are making art for ourselves, they are happy, which has been the most amazing gift during this time,” Blume explains.

Blume’s paintings, which she says are “heavily influenced by surrealism, deal with the stigmatization of mental illness through the portrayal of eyes.”

“The weird and unexpected, as extolled through the surrealist emphasis on Freud and the subconscious, have always fascinated me,” Blume says in her artist’s statement for a virtual gallery of work by senior art majors.

One of the reasons she got interested in art and art therapy is because her sister suffers from a serious mental illness.

“Art has had a huge positive impact on her,” the senior explains.

Before the pandemic, Blume was thinking about pursuing a career as an art therapist. Now she wants to help with COVID-19 relief and is considering volunteer programs.

Edson Martinez-Sanchez (C’20), who won the department’s highest recognition this year – the Clifford T. Chieffo Award for Art – says making art in the time of COVID-19 is what keeps him centered.

“During this pandemic, art has been an essential pillar in my daily routine, because it has served as an important form of expression and it has allowed important moments of introspection,” says Martinez, who was born in Veracruz, Mexico, and now lives with family in Salem, Oregon. “Despite all the circumstances, when I sit down to work, it is possible for me to balance my thoughts.”

He says his work focuses on the “artifice and popular notions of beauty in our culture that often shroud the true uniqueness of the individual.”

“For me, art is not a commercial pursuit,” he adds. “It serves as a means of getting to know oneself through the process of questioning identity, culture and the many ideas that have contributed in the shaping of it.”

Drawing, he says, has played a large role in his life, and that for him, it goes hand-in-hand with learning. He explains that since he always made drawing a part of his note-taking, formal drawing techniques came naturally to him.

“I don’t know exactly when I fell in love with art, but I think it has a lot to do with the fact that through art we can learn about ourselves and the cultures that came before us,” he says. “Art is the one thing that has the ability to bring different cultures together.”

He says he wants to continue developing his work as an artist.

“Previously I had planned to apply to art schools or to travel abroad,” he says, “but it seems like I’ll have to go home for a while before resuming these aspirations.”

Morgan Smith (C’20) of Prince George’s County, Maryland, won first prize for her work in the Senior Art Majors Exhibition, including a video called Black Love, which visualizes a poem of the same name by Rudy Francisco.

“Art is the ability to express our inner being outwardly,” says Smith, a studio art major with a concentration in photography and video and minors in African American studies and sociology.

“The use of black pop culture is to emphasize the importance and legitimacy of black art, film and media as sources that provide historical data to the black culture, tradition and diaspora,” she wrote in an artist’s statement.

She also created a number of collages and photographs, including one called Anxiety, and a series of photographs titled, The System Was Never Broken.

The Georgetown senior says her sister and her mother exposed her to the beauty of the arts, and she hopes to one day combine her video skills with the knowledge she’s gained from her exposure to African American studies and sociology.

“I want to work in the entertainment industry in a couple different ways,” she says. “I have movie ideas I want to bring to life and also want to open my own community-centered brands through my basketball networking career.”

Voice for the Muted

“I believe my artwork, no matter the medium, revolves around my black experience and what it means to be a minority in the society we live in,” Smith adds. “Studying sociology has given me the opportunity to further explore this dynamic. In combination with these ideals I have been able to give a voice to those who have been muted.”

The recognition that Smith and Martinez received is part of the Department of Art and Art History Misty Dailey awards, supported by the Dailey family to honor the memory of a family member and Georgetown art major who passed away. The department’s virtual ceremony took place on April 23.

Cliff Chieffo founded the department more than 50 years ago and joined the Zoom ceremony.

“Creativity is my new vaccine,” he said. “To all the scholar-artists, congratulations.”

The exhibit, in normal times, takes place in the Maria & Alberto de la Cruz Art Gallery, directed by Al Miner. With help from the department, a virtual exhibition of the students’ work was created.

“In addition to displaying a mastery of your chosen mediums, your work is intimate, challenging, thoughtful, slick and unsettling,” Miner said during the virtual awards ceremony. “These are compelling qualities for artwork at any time, but all of your pieces take on new resonance in the context of a global pandemic.”