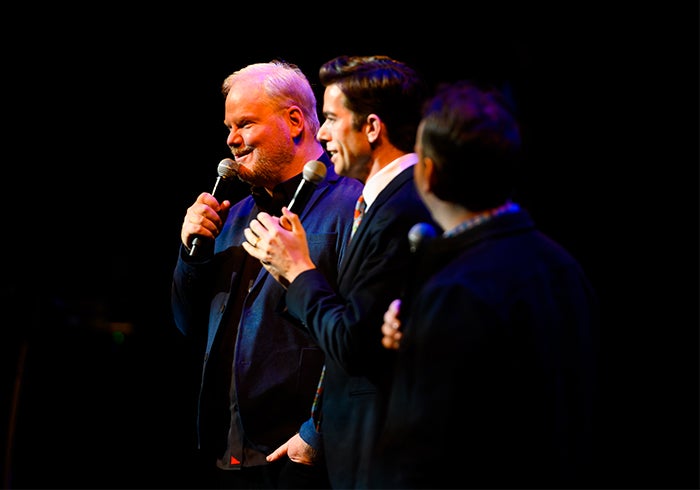 The alumni performed for students, alumni and fans during Stand Up for Georgetown at the Brooklyn Academy of Music.

The proceeds from the show will benefit the Georgetown Scholars Program (GSP), which provides resources and support for students from all socioeconomic backgrounds, including first-generation college students and students from underresourced high schools.

“For a program that relies on philanthropy, the money raised from this event is so helpful,” said GSP director Missy Foy (C’03). “The comedians prioritized the inclusion of students and removed cost as a barrier. I’d have to say the high point of the evening was having so many GSP students and young alumni present. We’rethankfulfor thegenerosity of the comedians, donors and, especially,Michelle Mauboussin (B’86), Emily Chen Carrera (B’88) and their volunteer team for organizing the event.”

Gaffigan, who majored in finance, also took time away from his current “Fixer Upper” comedy tour last September to perform at a sold-out show in Chicago to support GSP.

In addition to stand-up, the four-time Grammy-nominated comedian, actor, writer, producer has starred in numerous films and TV shows, including The Jim Gaffigan Show.

During their undergraduate years at Georgetown, Birbiglia and Mulaney were members of the Georgetown Players Improv Troupe, now the Georgetown University Improv Association, and Gaffigan played on the football team.

“Georgetown was a wonderful education, and I made wonderful friends,” Birbiglia told the audience.

He said after graduation he discovered Gaffigan’s name in an alumni directory as the only graduate with “comedian” listed as an occupation.

He called Gaffigan for advice and the two have been friends ever since.

Birbiglia, who majored in English, credits Georgetown with giving him his first break in comedy after he won the “Funniest Person on Campus” competition his sophomore year.

The actor and writer received accolades for his 2012 breakout film Sleepwalk With Me, which won the NEXT Audience Award at the Sundance Film Festival. The film is based on his book, Sleepwalk With Me And Other Painfully True Stories (Simon & Schuster, 2010), a New York Times bestseller.

He currently is wrapping up his solo Broadway show, The New One, and has a recurring role on Orange is the New Black.

“When I was at Georgetown, I studied screenwriting and playwriting under John Glavin, and that was my first sort of mentor relationship … I looked for those types of mentors when I left Georgetown and went into the world,” he said during a 2012 interview with Georgetown College.

Glavin, a professor of English at Georgetown, also taught Mulaney.

Birbiglia and Mulaney have returned to Georgetown for events in the past few years.

The Department of Performing Arts featured five unplugged versions of Birbiglia’s Off-Broadway hit, My Girlfriend’s Boyfriend in 2013 at Gonda Theater.

Mulaney returned to campus for a 2016 Lecture Fund event with fellow Georgetown alumnus and comic Nick Kroll (C’01). The two performed together in the Broadway hit Oh, Hello in 2016-2017.

Mulaney, also an English major, became a writer for Saturday Night Live at the age of 25, and since has written for the Golden Globe Awards, numerous shows on Comedy Central and more.

He recently starred in the box-office hit Spider-Man: Into the Spider-Verse as the voice of Spider-Ham. 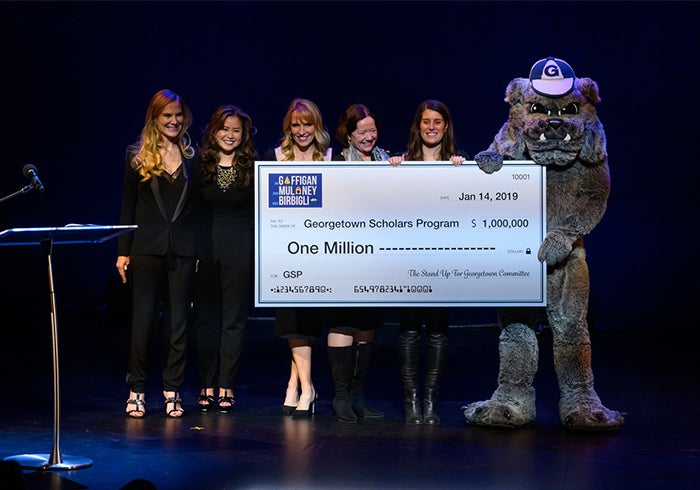