Jack the Bulldog is the university’s official mascot – a well-known figure who is a beloved presence at Georgetown sports events. According to the American Kennel Club, Jack ranks eighth among the 125 most famous dogs in pop culture.

The class of 1964 brought the first Jack the Bulldog to campus in 1962. According to popular legend, the puppy refused to answer to the name that students gave him (Hoya) and only responded to “Jack.” The current mascot is often seen skateboarding across the court during games.

Apply online to become a member of the Jack Crew.

Back to Top
Requests for Jack Anchor

Visiting Jack
Jack is walked on Main Campus several times during the day and attends campus events each week. For more information about getting together with Jack, please email the head of Jack Crew.

Walking Jack
The Jack Crew is responsible for walking Jack during the day and evening and for escorting him to various events on campus. Students are asked to become members of the Jack Crew before walking Jack.

Each crew member has specific days and times of the week walking Jack. This allows Jack to get to know particular students (and vice-versa) and helps make his time with them more enjoyable (and less stressful).

To become a member, students should have experience with animals, be comfortable facilitating a variety of interpersonal interactions and be able to show evidence of school spirit. Students will also be asked to learn basic information about Jack (e.g., bulldog idiosyncrasies) and show that they are comfortable handling dogs.

Apply online to become a member of the Jack Crew.

Appearances at Social Functions
It is hoped that Jack can appear at as many university functions as possible. University-sponsored activities (e.g., the Fountain Blessing and Georgetown Day) and athletic events are a priority.

Other gatherings (e.g., meetings of student groups) will be considered depending on the nature and location of the event and whether a member of the Jack Crew is available to bring Jack to it. Like all bulldogs, Jack is not able to walk far and thus can typically only attend events held on campus.

Request the appearance of Jack at your event.

Back to Top
Vital Statistics Anchor 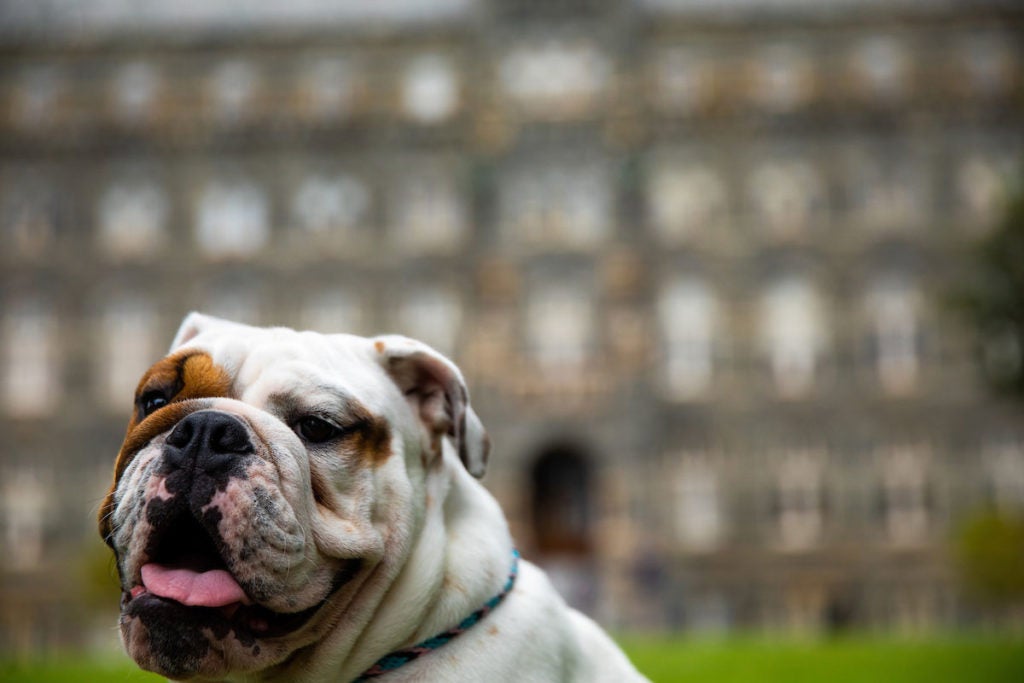 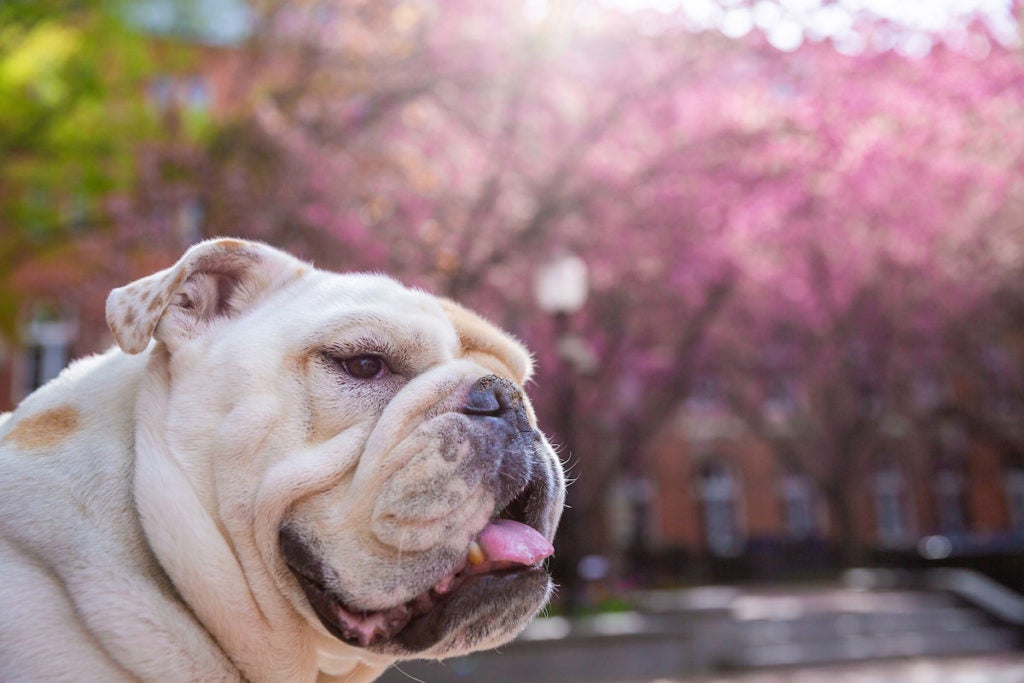 Back to Top
A History of Dogs at Georgetown Anchor

A History of Dogs at Georgetown

Though the nickname for its sports teams (and students in general) is “the Hoyas,” Georgetown adopted the English bulldog as its mascot in 1962. A group of students had lobbied for the move, arguing that Georgetown athletes were, like bulldogs, “tenacious.” A student committee purchased a two-year-old bulldog which they had hoped to name “Hoya.” However, the dog stubbornly refused (as bulldogs do) to respond to anything but his given name, “Jack.” The dog won, and students began to call him “Jack” – beginning a tradition that continues today.

Over time, the tradition of a permanent, on-campus mascot was replaced by a student in a bulldog suit. However, seniors in the class of 1999 began a “Bring Jack Back” campaign and succeeded in welcoming a new Jack to campus in March of 1999. Unfortunately, this Jack (now “the elder”) had to retire in 2003 when his caretaker, Hoya alum Scott Pilarz S.J., became president of the University of Scranton.

Jack Sr. was born on May 3, 2003. He arrived at Georgetown on July 19 of the same year. While not related to his immediate predecessor, Jack is from the same line as “Rocky,” GU’s mascot during Patrick Ewing’s time on the Hilltop. While Jack Sr.’s official mascot duties ended in 2012, he continued to live on campus, spending his days resting in the lobby of the Jesuit Residence and the evenings at his apartment in New South (which he shared with Rev. Christopher Steck, S.J., associate professor in the Department of Theology). Jack Sr. passed away on June 2, 2015.

In April of 2012, the Georgetown community welcomed Jack, Jr. (J.J.) to Georgetown as mascot-in-training. When the mascot lifestyle proved too hectic and exciting for J.J., he returned to a home environment and now lives happily with a loving new family.

The Bulldog Advisory Committee, which includes students, faculty, alumni and staff, was established to determine how the Georgetown community can strategically and thoughtfully continue the bulldog mascot tradition. In the fall of 2013, the BAC convened to prepare for the training and care of a new mascot on campus. The youngest “Jack” arrived in October, a generous gift from champion bulldog breeder and Hoya parent Janice Hochstetler. One of the most recognized figures on campus, Jack the Bulldog spends his time celebrating life on the Hilltop and cheering for Hoya sports. When not occupied with his mascot duties, Jack resides in a Georgetown townhouse with caretaker McKenzie Stough (C’13).

A version of this story by former archivist Jon Reynolds (C’65), who passed away in 2000, ran in a 1983  issue of Georgetown Magazine.

Back to Top
Jack and the Jesuits Anchor

Jack and the Jesuits 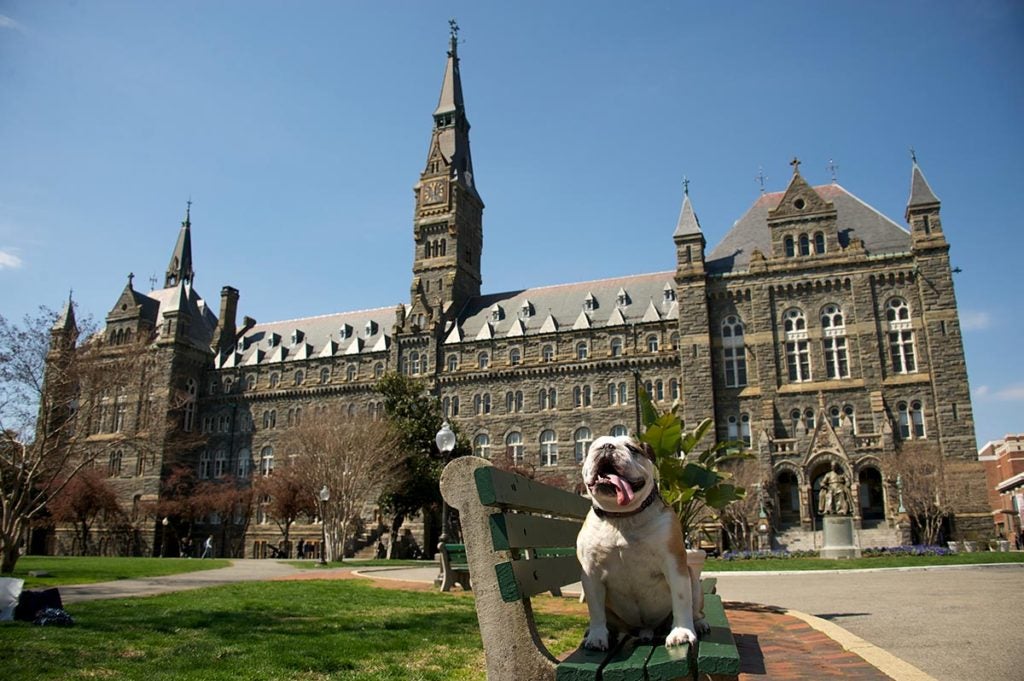 Would the spirituality of another religious community better suit Jack?

Some other religious communities are better known for their devotion to animals than the Jesuits. The Franciscans, for example, have a tradition of blessing animals on the feast day of their founder, and some communities of monks have made raising dogs part of their monastic labor.

But Jesuit spirituality has its own tradition of valuing God’s creatures. At the end of his Spiritual Exercises, St. Ignatius of Loyola, founder of the Jesuits, asks the retreat participant to look with wonder at all of God’s creatures. Ignatius asked them to find in themselves the labor of God’s spirit – thus the Jesuit motto of “finding God in all things.”

The Jesuit poet Gerard Manley Hopkins captured well this idea of finding God in the good things of the world with his poem “Pied Beauty,” which includes these lines:

“Glory be to God for dappled things -– For skies of couple-colour as a brinded cow; For rose-moles all in stipple upon trout that swim; Fresh-fire coal chestnut-falls; finches’ wings; Landscape plotted and pieced – fold, fallow, and plough; And all trades, their gear and tackle and trim. …

… All things counter, original, spare, strange; Whatever is fickle, freckled (who knows how?) With swift, slow; sweet, sour; addazzle, dim; He fathers-forth whose beauty is past change: Praise him.”

Jesuit spirituality encourages people to ponder and experience a God who works personally and directly in their lives – a God who labors in big and small events, in the people and things of their daily existence.

How God works in our world always has an element of mystery to it, and so one cannot know for sure exactly how or where God is laboring in any creature.

The most that can be said about Jack the Bulldog is that he has made a real contribution to the well-being of student life at Georgetown. As one of the many cherished traditions at Georgetown, Jack helps draw Hoyas together and foster a sense of community among them. Perhaps in that small contribution by Jack to life on Hilltop, one can see a fragment of God’s labor of love.

One doesn’t have to be a Franciscan to love a dog like Jack.