Georgetown alumnus Christopher Kinney (C’11) is among the elite athletes who will represent America in South Korea this month as a member of the 2018 U.S. Olympic Men’s Bobsled Team.

Georgetown alumnus Christopher Kinney (C’11) is among the elite athletes who will represent America in South Korea later this month as a member of the 2018 U.S. Olympic Men’s Bobsled Team.

“Making the team has me feeling a wave of emotions,” says the Georgetown track and field standout, who will compete in the four-man bobsledding heats Feb. 24-25.

“I’m extremely ecstatic and humbled to be representing the USA, while at the same time exhausted from the excitement and the work every sled on Team USA had to put in.”

Kinney of Stockbridge, Georgia, joins a 12-member bobsled team going to PyeongChang, South Korea, including four Olympians who previously competed in Vancouver in 2010 and Sochi, Russia, in 2014. 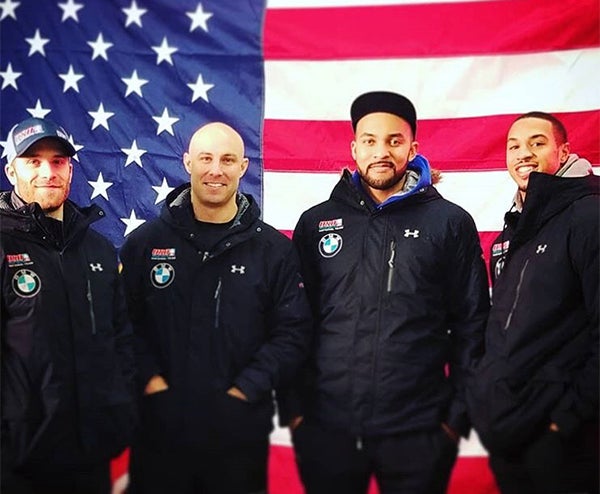 The Georgetown alumnus will be a push-athlete on the same sled as Hakeem Abdul-Saboor and Sam Michener. The sled will be piloted by two-time Olympian Nick Cunningham.

Kinney, whose grandmother is Japanese, visited Japan as a child and later decided to major in Japanese at Georgetown.

His Olympic dreams began as he watched the 1998 Winter Games in Nagano, Japan. After graduation and working for three years in Tsukuba, Japan, while running professional track, he decided to try out for the Olympic bobsledding team.

“Georgetown paved the way for me to become an Olympian in bobsled,” Kinney says. “My skills from track transferred over well, and I get to compete with and interact with athletes from diverse backgrounds around the world.”

While at Georgetown, Kinney was a four-time All-American in track and field and earned a pair of honors in the indoor 60-meter hurdles and the outdoor 110-meter high hurdles.

“The students who attend Georgetown are ambitious and want to grab the metaphorical bull by the horns and take on the challenges and achieve the endeavors they set out to achieve,” Kinney says. “My Georgetown experience was a time that I found myself and grew into who I am today.”