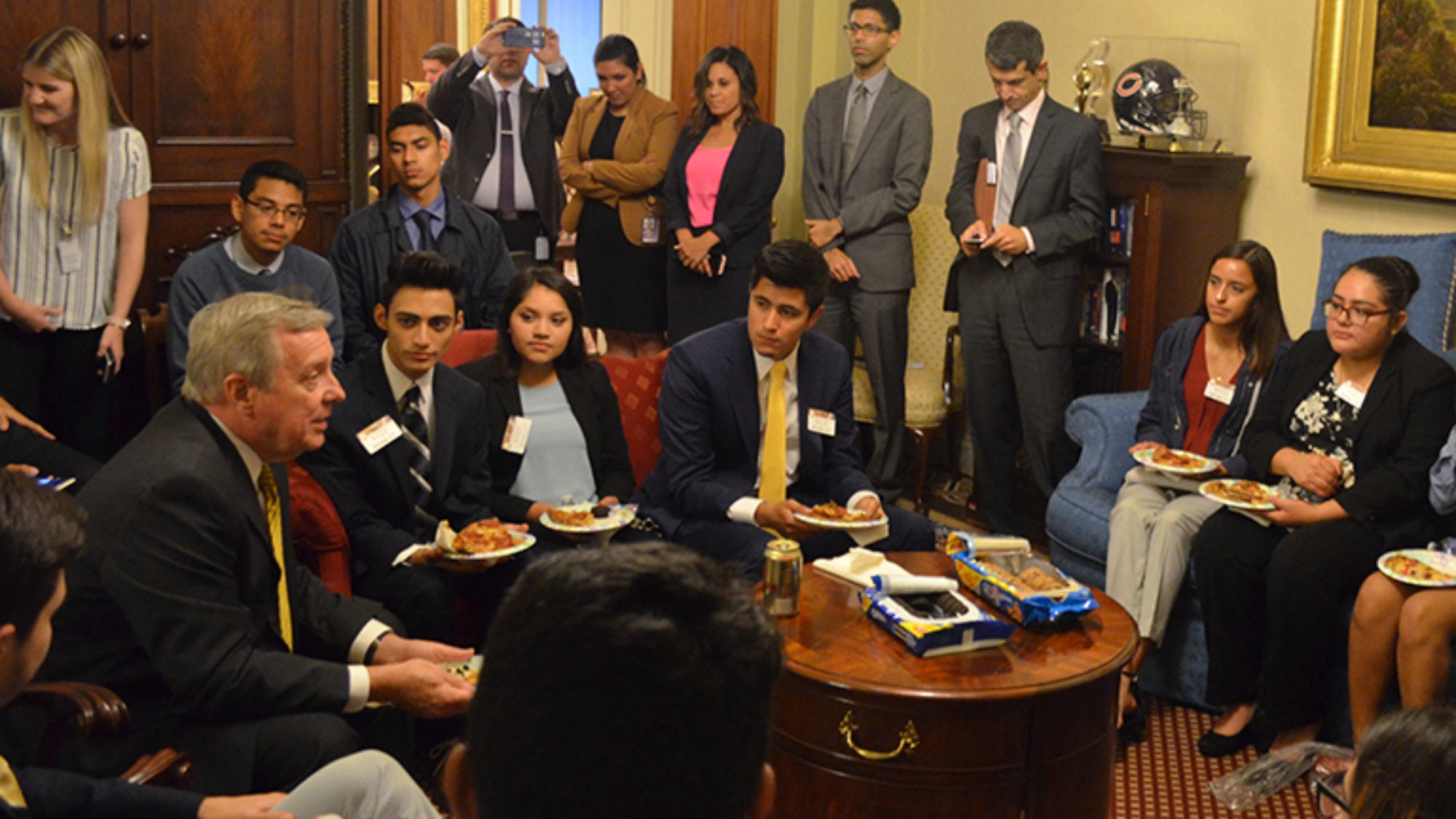 The students were in the Senate gallery yesterday as Durbin (SFS’66, L’69) and other senators spoke in support of the legislation that would provide qualifying undocumented minors with conditional and, ultimately, permanent residency.

On Tuesday, the Trump administration announced that the Deferred Action for Childhood Arrivals (DACA) program, shielding from deportation roughly 800,000 undocumented children and young adults, would be rescinded and phased out starting in six months.

Since Trump’s announcement, however, there has been mounting bipartisan support to protect these individuals, led by Durbin and Sen. Lindsay Graham (R-South Carolina).

“Our meeting with Senator Durbin last night was extremely inspiring,” says Juan Martinez (SFS’20) of Dallas, Texas, an international affairs major who came to theUnited States before he was 2 years old. “Seeing a senator – especially one that is a fellow Hoya – believe in and fight on the behalf of DREAMers for over a decade was very affirming.”

Luis Gonzalez (C’19), an American studies and government major from Santa Ana, California, said the session made him feel optimistic.

“While President Trump’s decision to end DACA continues to be devastating, having Senator Durbin, a champion for DREAMers, fighting for us gives me hope,” says Gonzalez, who came to America at the age of 8. “Last night, that hope manifested itself in the way in which he welcomed UndocuHoyas into his office. Likewise, being in the same space with Senator Durbin was an honor. He was welcoming and as supportive as can be.”

Durbin has spoken at Georgetown numerous times, including in 2013 on immigration reform.

“I’m proud of my alma mater, Georgetown, for its continued support of undocumented students, Dreamers, and the Dream Act,” Durbin told The Hoya.

“All I ask is that we keep up the fight, louder and more intense than ever, so that the American people and my colleagues in the House and Senate continue to hear the stories of these young people and see how passing the Dream Act would make our country a stronger, smarterand more prosperous country in the future.”

Scott Fleming, Georgetown’s associate vice president for federal relations, and Arelis Palacios, director of Georgetown’s undocumented student services, accompanied the students to Capitol Hill, where they spent about two hours with Durbin over pizza talking about the DREAM act and viewing speeches on the topic from the Senate gallery.

“I think our DREAMers visit to Senator Durbin’s office was very important at this particular moment because it gave them a sense of how truly committed Senator Durbin to achieving a solution so that they are not at risk,” Fleming says. “Durbin reassured them that the dynamic has changed since Tuesday and that members of both sides of the aisle appear to want to find a remedy.”

“It was a privilege to have been invited to Senator Durbin’s office alongside the students Wednesday evening, less than 48 hours after the DACA rescission was announced,” says Palacios, recently hired on a full-time basis to support Georgetown’s undocumented students. “While many DACA beneficiaries at Georgetown and around the nation were reeling from this news, he gave our community hope that there should and will be a permanent legislative solution soon.”

Georgetown President John J. DeGioia said this past Tuesday in a message to the university community that hundreds of Georgetown students are gathering signed letters to members of Congress urging them to support legislative efforts to protect our undocumented students.

Fleming says about 1,000 letters have since been sent by Georgetown students to Capitol Hill on the issue to date and the effort is continuing.

“We have the capacity and responsibility, as a nation to provide a permanent legislative solution to support our undocumented students,” DeGioia wrote. “These are extraordinary young people who are part of the fabric of our nation – the only home that they have known. We must find the moral imagination to care for them and work together to assure their safety and well-being.”

Martinez said listening to Durbin talk made him hopeful for the future.

“These are uncertain times but if enough good people stand up for what a majority of Americans believe in, things can be made much better for many people like myself, who know no other home than America,” the student said. “The meeting with Senator Durbin made me realize how lucky I am to attend Georgetown and makes me extremely proud to call myself a Hoya.”