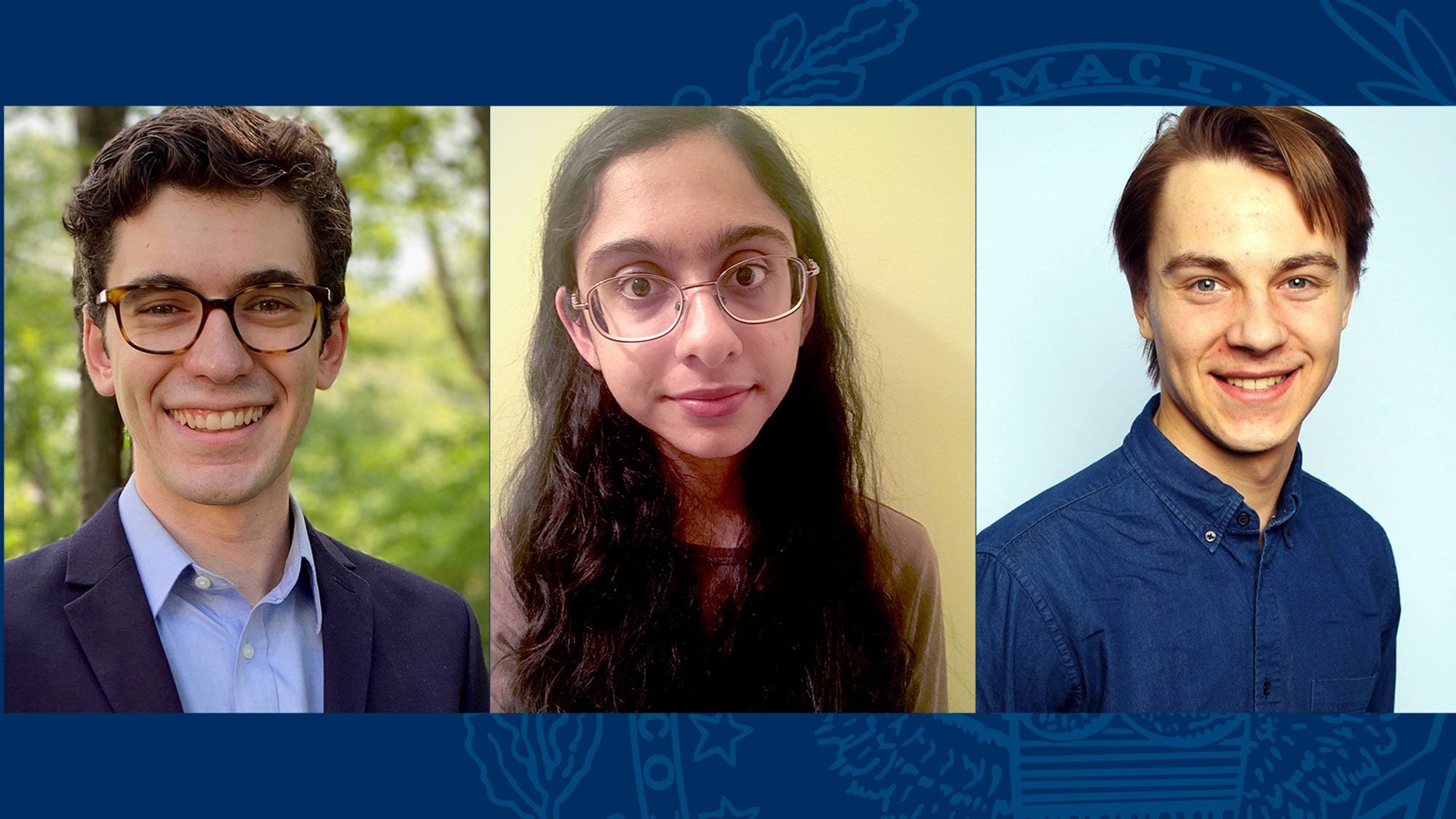 Georgetown has created a new student-led effort to foster a better sense of community and spirit in an effort to bridge the gap between current and former students as the COVID-19 pandemic and virtual learning continue. Hoyas @ Home focuses on regional programming, designed to encourage students to build interpersonal relationships with their local peers and to maintain connections with the campus community. A diverse coalition of student, administrative and alumni groups made this effort possible.

Three of the student leaders – Ben Telerski (C’23) of New Hampshire, Nikita Khatri (B’22) of Ohio and Carver Fitzgerald (C’22) of California – share how the effort has been received, future goals, programming plans and how parents and families can help encourage their students to get involved.

How did the idea behind Hoyas @ Home start and what steps have you taken to get the program up and running?

TELERSKI: My mom’s in the Class of 1993, and she runs the alumni interviews for the state. She’s very connected with the alumni community of New Hampshire, and there was some talk of alumni wanting to help connect students within the state. There are just so few people in the New Hampshire alumni network and you’re only going to get interest from a small percentage of those people. We decided it’d be much more effective trying to connect alumni and students on a larger scale.

So we met with some New Hampshire alumni and members of Student Affairs leadership – Erika Cohen-Derr and Aysha Dos and others from the Center for Student Engagement to see how we could make that happen.

KHATRI: We had a launch meeting on Nov. 18 to brainstorm ideas for the initiative and settled on the idea that it should be more organic. We’re obviously in the very early stages right now, so we have some regional group news that is very general right now, and a Hoyas @ Home Facebook Group to go along with that.

The idea is to expand the initiative and bring awareness to alumni and other Georgetown community groups as we go. We’re mostly focusing on undergraduates right now, partially because it’s a new initiative so we’re just hoping that we can get some leaders from each region to do some virtual programming now and possibly in-person programming in the future.

FITZGERALD: We’ve been trying to find the right balance between structure and flexibility because I know a lot of students want regional programming, but they don’t necessarily know how to work within Georgetown’s systems, to find out who might be in their region, or know what might be possible. We’re working to give people the resources to be able to very easily set up their own types of events, and we’ve been sharing a Regional Engagement Interest Form to gauge what people are looking for as well as their region, and leadership opportunities.

What are some future goals that you have for Hoyas @ Home?

FITZGERALD: There are a couple different layers of goals that we have. One thing that I’ve been thinking about is how to not have this just be like a short-term, Band-Aid solution for the pandemic, but have it actually continue afterward.

I know people have always had needs for wanting to meet people in their region. For example, when you go home for the summer, you might not be able to see any of your friends from school until you return. So getting to know other students who do live in your region can be very helpful. We think creating virtual programming and then continuing into the future with more in-person events so people can get to know each other regionally would really help.

KHATRI: I have to agree with that. My family moved to Ohio at the end of last year, and I really don’t know anyone here. So in a normal situation, it would be nice to just have some sort of platform to meet other Georgetown students. I think one of the long-term goals we were talking about in one of our first two meetings is to create an app for meeting people from Georgetown around your region. I think that would be really cool if that happened, but I think just meeting people in your region who have a shared connection is just wonderful.

What type of programming are you focusing on creating and developing?

TELERSKI: Something we’ve been talking about throughout the whole process is addressing different needs of different groups of students.

For first-year students, it’s about building community, like through speed friending, game nights on Zoom or just getting on Zoom and chatting with new people.

For sophomores, juniors and seniors, it’s focusing on alumni networking so they can connect with alumni in the region they want to move to after graduation.

Figuring out how we’re going to implement different programming for different needs is an important goal of ours for future planning. One thing we have also talked about is pushing for more people to get on Hoya Gateway because it’s already such a great resource.

How are you promoting the program?

FITZGERALD: We’re trying a couple different avenues. We have a Hoyas @ Home Facebook Group which we just started. Nikita and I run the Georgetown Program Board (GPB), so we’re also trying to reach out through existing social media accounts and email lists like GPB’s. We also have a full list of GroupMe Regional Chats we just created that students can join.

KHATRI: At this point, I would suggest students also wait it out a little since we’re just starting to grow these communication platforms. There’s no harm in signing up for the initial information and then choosing not to participate later. You’ll at least have that place you can check for updates. It’s something that can be valuable now or in the future, regardless of who you are and where you’re living.

What can parents and families do to help promote or get involved?

TELERSKI: Just having families encourage their students to sign up for literally everything and just see what they’re interested in. I think that’s something that’s really important, especially for first years. I’ve interacted with some through New Student Orientation that want to be engaged, but they don’t want to sit on Zoom all day or they might be a little too nervous to initiate conversation on their own.

The whole idea behind this is for students to organize events for other students so they can meet each other, and I do think it’s important that it stays student-driven. For parents and family members who are alumni, we encourage them to continue getting involved with their regional alumni clubs, Hoya Gateway, and the Georgetown Alumni Office, so that once we do tie in those resources, they’ll be much more coordinated from the beginning.