SRCD recognizes emerging scientists and scholars who have distinguish themselves through research, publications and other scholarly activity early in their careers.

“I was surprised and very excited to find out I had been selected to receive the award,” says Johnson, an assistant professor in Georgetown College’s department of psychology. “It’s a really big honor in the field of child development.”

She will receive the SRCD Early Career Research Contributions Award during the organization’s biennial meeting in Philadelphia in March. 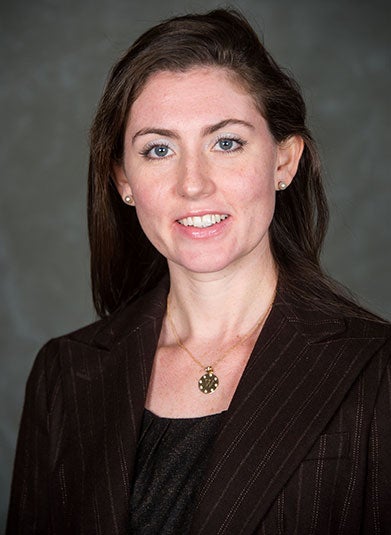 Anna Johnson, assistant professor of psychology in Georgetown College, started her research while working on her doctoral dissertation on the effects of the federal child care subsidy program on low-income children’s cognitive, behavioral and social readiness for kindergarten.

Johnson, who joined Georgetown as a post-doctoral research fellow in 2011 before becoming an assistant professor in 2013, began her current research program while working on her doctoral dissertation on the effects of the federal child care subsidy program on low-income children’s cognitive, behavioral and social readiness for kindergarten.

The CCDF serves nearly 2 million children a month and is one of the government’s biggest investments in the early care and education of low-income children. Though primarily a parental employment program, CCDF includes a focus on increasing children’s access to high-quality care.

But Johnson says the physical settings and quality of the child care purchased by subsidies vary in terms of educational focus, while public pre-K programs and Head Start generally provide higher-quality educational experiences to low-income children.

Compounding the issue is the fact public pre-K programs for preschoolers, and the version of Head Start for infants and toddlers, isn’t available everywhere.

“I started by looking at what kinds of care parents with subsidies purchase and how high-quality that care may be,” says Johnson, whose research on the subject was published in the journalChild Developmentin 2012 and 2014. “A parent can use a child care subsidy voucher to enroll their child in a licensed day care center, which looks a lot like preschool, or to leave their child at home with the grandmother … they can select from a wide range of child care arrangements that have varying levels of quality associated with them.”

Johnson’s research also found that families using subsidies purchased higher-quality child care than families that did not use subsidies for child care. But the subsidy-purchased child care isn’t always the best option, she explains.

“The care purchased with the subsidy is slightly higher in developmental quality but it’s not as good as care publicly funded through one of the other programs like Head Start and public pre-kindergarten, which were designed specifically to support child development,” Johnson says. “So the program could be better, and there’s room for improvement certainly.”

The professor says her interest in early childhood development and public policy began during her own childhood in Washington, D.C.

During a volunteer outing with her parents sorting gift donations for children in need one holiday season, she noticed a broken toy truck in a basket and asked her mother why someone would give that as a gift.

“She said to me, ‘There’s no difference between you and children who might receive a broken toy as a gift, except that those children were born into one household and you were born into another,’” Johnson recalls. “At the age of about 8, I was stunned, … and I never let go of that. That to me was the defining moment of ‘This just can’t be, there just can’t be this gap.’ ”

At Georgetown, Johnson teaches classes in general psychology, lifespan development and an upperclass seminar on children, science and politics.

If I can contribute to the repository of information used by policymakers when they are interested in making changes with children’s best interest in mind, I will be happy. I don’t think I’ll ever lose interest in asking the questions on how public policy can support the development of our youngest low-income children.”

Johnson says the goal of her research is to add to the scientific literature and help policymakers in Congress create informed, evidence-based legislation that protects the best interests of socioeconomically disadvantaged children and their families.

The U.S. Senate cited her research on CCDF in July 2012 during a Subcommittee on Children and Families hearing that was considering funding reauthorization of CCDF’s funding stream.

Congress reauthorized the funding as part of the Child Care and Development Block Grant Act of 2014, which President Barack Obama signed in November.

“If I can contribute to the repository of information used by policymakers when they are interested in making changes with children’s best interest in mind, I will be happy,” she says. “I don’t think I’ll ever lose interest in asking the questions on how public policy can support the development of our youngest low-income children.”