Title: Protein Linked to Stress Reduced by Acupuncture in Rats

Acupuncture significantly reduces levels of a protein linked to chronic stress, according to a study with rats by researchers at Georgetown University Medical Center (GUMC). 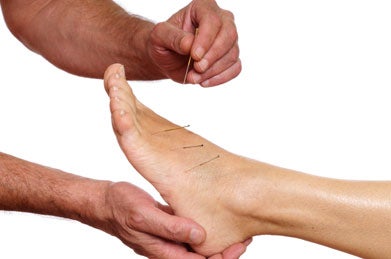 “It has long been thought that acupuncture can reduce stress, but this is the first study to show molecular proof of this benefit,” says Ladan Eshkevari, lead author of the study and assistant professor in the School of Nursing & Health Studies.

Acupuncture significantly reduces levelsof a protein linked to chronic stress, according to a study with rats by researchers at Georgetown University Medical Center (GUMC).

The study may help explain the sense of well-being many people say they get from this ancient Chinese therapy.

Published online in Experimental Biology and Medicine earlier this month, the researchers say that if their findings can be replicated in humans, acupuncture would become a proven therapy for stress.

“It has long been thought that acupuncture can reduce stress, but this is the first study to show molecular proof of this benefit,” says the study’s lead author, Ladan Eshkevari, an assistant professor at Georgetown’s School of Nursing & Health Studies (NHS), part of GUMC.

Eshkevari, assistant director of the Nurse Anesthesia Program and a certified acupuncturist, says she conducted the study because many of the patients she treats with acupuncture report a “better overall sense of well-being – and they often remarked that they felt less stress.”

The professor designed a study to test the effect of acupuncture on blood levels of the neuropeptide Y (NPY), which is secreted by the sympathetic nervous system inrodentsand humans.

This system is involved in the “flight or fight” response to acute stress.

Eshkevari gently conditioned the rats to become comfortable with the kind of stimulation used in electro-acupuncture – an acupuncture needle that delivers a small, painless electrical charge.

This form of acupuncture is often used for pain management, she says, adding that she used electro-acupuncture to ensure that each rat would get the same treatment dose.

She then selected a single acupuncture point to test on the leg below the knee, which is said to help relieve a variety of conditions including stress in humans.

The study used four groups of rats for a 14-day experiment:

Eshkevari and her research team found NPY levels in the experimental group came down almost to the level of the control group, while the rats that were stressed and not treated with acupuncture had high levels of the protein.

In a second experiment, she stopped the acupuncture in the experimental group but continued to stress the rats for an additional four days. The NPY levels remained low.

“We were surprised to find what looks to be a protective effect against stress,” she says.

The American Association of Nurse Anesthetists funded the research with a doctoral fellowship award to Eshkevari, and the National Institutes of Health’s National Center for Complementary and Alternative Medicine provided a grant for the study.