The material properties of a major contributor to climate change – the cement used in concrete – are now better understood, thanks to a study published today in the Proceedings of the National Academies of Science (PNAS) by Georgetown physics professor Emanuela Del Gado and her collaborators.

– The material properties of a major contributor to climate change the cement used in concrete – are now better understood, thanks to a study published today in the Proceedings of the National Academies of Science (PNAS) by Georgetown physics professor Emanuela Del Gado and her collaborators.

The study could help in the future development of more sustainable cement formulations.

“Cement manufacturing is responsible for 5 to 8 percent of global CO2 emissions,” notes Del Gado, a theoretical physicist who is part of Georgetown’s Institute for Soft Matter Synthesis and Metrology. “Although there have been calls for creating so-called ‘green cement,’ the sustainability and science communities have yet to find a way to reduce CO2 emissions while retaining the efficiency, durability and cost efficiency of cement. Our study could help change that.”

Del Gado collaborated on the study with scientists at MIT’s Concrete Sustainability Hub as well as researchers at the University of California, Los Angeles, the University of Newcastle in the U.K., and the University Pierre et Marie Curie, the National Center for Scientific Research (CNRS) and Aix-Marseille University in France.

According to a 2012 report by the Earth Institute at Columbia University, cement production is growing worldwide by 2.5 percent annually, and, with increased urbanization, is expected to rise from 2.55 billion tons in 2006 to 3.7 to 4.4 billion tons by 2050.

“The effects of this trend on climate change could be devastating if we do not find a way of making cement more sustainable,” notes Del Gado, a native of Italy who began her work in Switzerland but came to Georgetown in 2014 to join the Institute for Soft Matter Physics and Metrology. “There is a continuous need to build infrastructure, particularly in developing countries, and that is not going away. I hope we can collaborate with the policy and sustainability communities and the construction industry to work together toward solving this problem.” 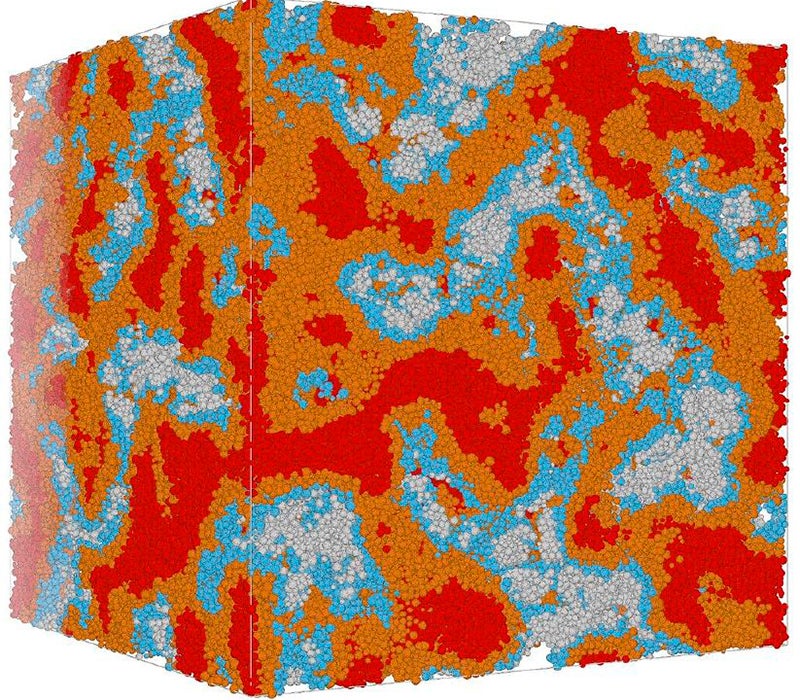 An image of the simulations revealing the nanoscale local density variations in the cement hydrates.

The Portland cement used in concrete is created with raw materials such as limestone, which is mixed with chemical additives and water to form a paste. The paste hardens through a chemical reaction called hydration to form what is known as concrete. CO2 emissions occur when the calcium carbonate in limestone is exposed to intense heat as part of the process of making cement.

The PNAS study looked at the nanostructure of calcium silicate hydrates (C-S-H), the main product of the hydration of Portland cement mostly responsible for the strength in cement-based materials. The nanostructure of C-S-H in cement has been under debate, so today’s study is a significant step forward.

“If you could change the chemistry used to create cement, and control the nanoscale properties that develop during hydration, you could scientifically design cement mechanics and greatly reduce the amount of CO2 emissions,” Del Gado said.

This would have to be done within industrial financial constraints while maintaining the integrity of construction materials, she added.

The research was supported by the Concrete Sustainability Hub at MIT, the Schlumberger under the Cement under Extreme Conditions Project, the French National Research Agency through the Laboratory of Excellence (Labex) ICoME2 and the Swiss National Science Foundation.

“I like the fact that you do scientific research but you are in contact with the practical life, with the constraints that people have to face in technology and practice,” she explained. “This is something I find very intriguing and very interesting.”