Title: Obama at Georgetown: Now is the Time to Invest in Helping the Poor

America is at a point at which it can and should focus on the widening economic gap and come together to help the poor, Barack Obama said today at the Catholic-Evangelical Leadership Summit on Overcoming Poverty at Georgetown.

The president addressed the topic of poverty and opportunity May 12 with Harvard public policy professorRobert Putnamand Arthur Brooks, president of the American Enterprise Institute, at the May 11-13 summit.

Georgetown’sInitiative on Catholic Social Thought and Public Lifeand the National Association of Evangelicals organized the bipartisan event addressing key questions related to the moral, human and economic costs of poverty in the United States. 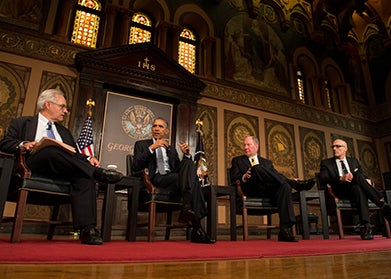 “I think we are at a moment – in part because of what’s happened in Baltimore, in Ferguson and other places, but in part because a growing awareness of inequality in our society,” Obama said, “where it may be possible not only to refocus attention on the issue of poverty, but also maybe to bridge some of the gaps that have existed and the ideological divides that have prevented us from making progress.”

Washington Postcolumnist and McCourt School of Public Policy professor E.J. Dionne Jr., who moderated the discussion, asked numerous pointed questions about how America could get beyond political gridlock to help the poor.

Obama said he and his chief of staff, Denis McDonough, a 1996 graduate of Georgetown’s Master of Science in Foreign Service program, believe it is the administration’s job “to guard against cynicism.”

“We can do something about these issues,” the president said. “I think it is a mistake for us to suggest that somehow every effort we make has failed, and we are powerless to address poverty. That’s just not true.”

He said he believed that both conservatives and liberals are unfairly stereotyped and that both care deeply about the poor.

Obama noted that the ties that once bound the CEO and the janitor to the same community through religious and social ground have disappeared, as the wealthy are increasingly able to isolate themselves from the poor and the poor have fewer opportunities.

A Dream in Crisis

This divide, which Obama likened to racially segregated America, has had a profoundly negative effect on investments in the poor, he said.

“Over time families frayed,” he said. “Men who could not get jobs left, mothers who are single are not able to read as much to their kids. So all that was happening 40 years to African Americans. And now what we’re seeing is that those same trends have accelerated and they’re spreading to the broader community.”

The pattern of fewer opportunities for all poor Americans that Putnam talks about in his new book, Our Kids: The American Dream in Crisis (Simon & Shuster, 2015), isn’t a new one, the president explained.

Putnam, whose book looks at why fewer people in this country today can expect to do better financially than the previous generation, said the divestment of “public goods” such as free access to extracurricular clubs in public schools has hurt America.

Dionne asked Putnam how America could break through “a politics in which food stamp recipients are still somehow cast as privileged or the poor are demonized” and asked the author to lay out the “moral call” of his book.

“What the book presents is a lot of evidence of growing gaps between rich kids and poor kids,” Putnam said. “Over the last 30 or 40 years, things have gotten better and better for kids coming from well-off homes and worse and worse for kids who come from less well-off homes.”

The author said the gap is growing and is evident in family stability issues, poor-quality schools and lack of source of social supports for low-income children.

But he also noted America faced the same kind of gap at the end of the 19th century.

“That period was overcome by a reawakening of the conscience of America across party lines with the important contribution of religious leaders and religious people to the fact that these are all our kids,” Putnam said. “…I think it does actually give me grounds for hope. This is the kind of problem that we could solve as long as we all recognize is that it is everybody’s interest to raise up these poor kids and not to leave them in the dust.”

Dionne asked Brooks how Republicans and Democrats, conservatives and liberals, can agree on how to overcome poverty.

He said he was in the free enterprise movement because poverty is “the thing I care about most.” Two million people have been lifted out of poverty because of free enterprise, according to Brooks.

“We’ve gotten into a partisan moment where we substitute a moral consensus about how do we serve the least of these, our brothers and sisters, we pretend that moral consensus is impossible and we blow up policy differences until they become a holy war,” Brooks said. “That’s got to stop, because it’s completely unnecessary.”

Brooks said both the political left and right talk about the poor people as “the other.”

Brooks said that is a “human capital” approach to poverty alleviation and that is what the right and left could agree on.

“There are folks who are surprised that a conservative Republican has an agenda whose foundation is helping people escape from poverty and help the middle class move up,” Scott said. “But it’s where we live, it’s real America, it’s what excites me about public service.”

“Our faith-based groups I think have the capacity to frame this – and nobody has shown that better than Pope Francis,” the president said, “who I think has been transformative just through the sincerity and insistence that he’s had that this is vital to who we are.”