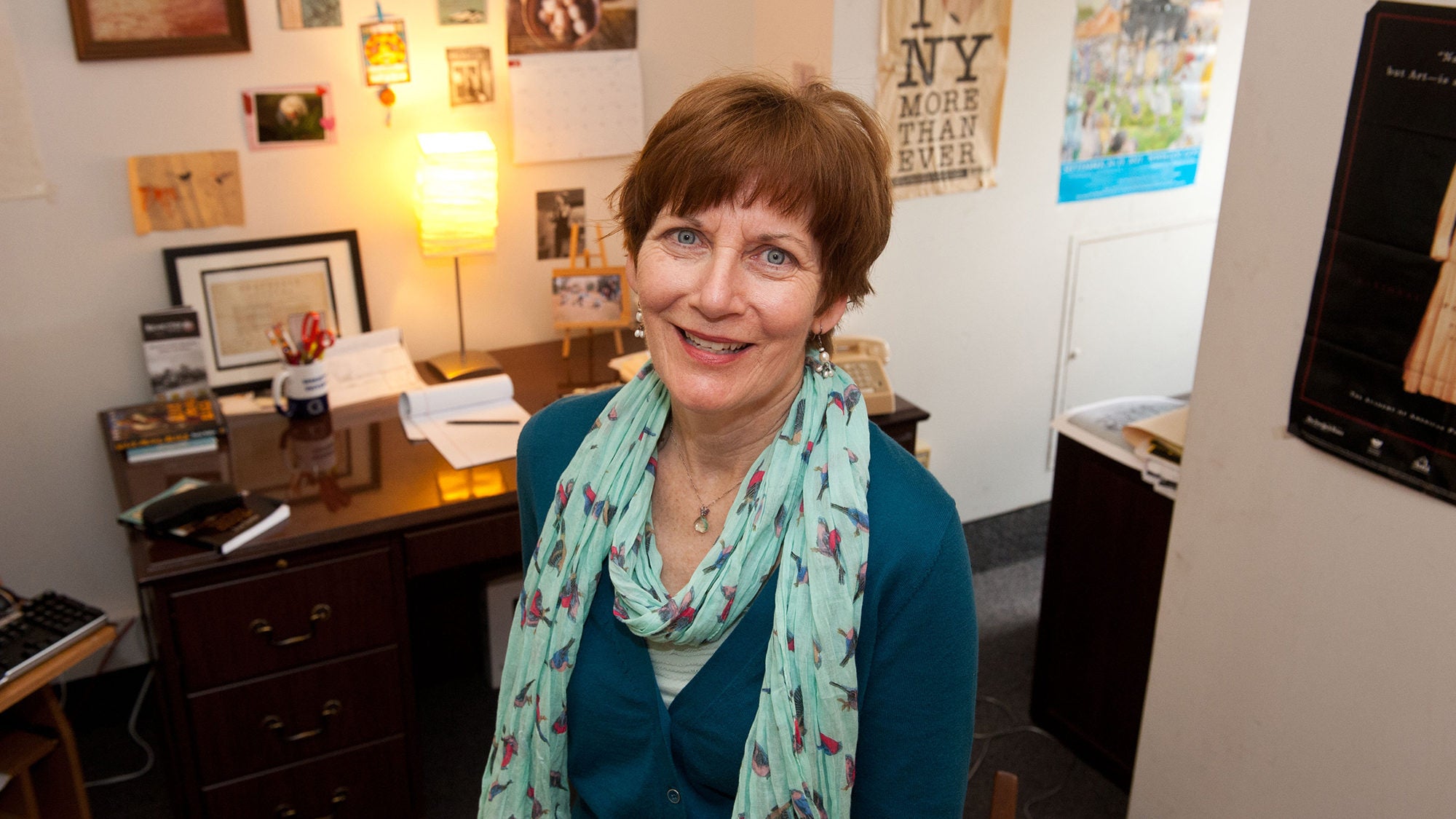 Maureen Corrigan of the English department, who has served for 22 years as a book critic for NPR’s “Fresh Air” program, was one of three judges for the 2012 Pulitzer Prize in Fiction.

The other two judges were writer Michael Cunningham, who won the Pulitzer for his book The Hours, and Susan Larson, the book editor for the Times-Picayune.

An announcement this afternoon made today came as a shock.

“Pulitzer history, of sorts, was made this year when the Pulitzer Board announced that no prize for fiction would be awarded this year,” says Corrigan, who has been published in the New York Times, written a book and writes a mystery book column for the Washington Post.

The last time the board declined to give out a Fiction Prize was in 1977.

“Michael, Susan and I read over 300 novels last year,” Corrigan explains. “We nominated three novels we believe to be more than Pulitzer-worthy – David Foster Wallace’s The Pale King, Karen Russell’s Swamplandia! and Denis Johnson’s Train Dreams. That the board declined to award the prize to any of these superb novels is inexplicable.”

“But, then again,” she adds, “the board has declined to award the prize to other superb novels over the years, including Thomas Pynchon’s Gravity’s Rainbow. Go figure.”

As if receiving 100 books a week for Fresh Air weren’t enough, Georgetown’s critic-in-residence accepted the challenge this past fall to read approximately 300 potential Pulitzer Prize-winning novels in nine months.

“The boxes kept coming,” she says, “There were times when I couldn’t sleep at night thinking, ‘Oh my God – how am I ever going to do this,’ but at the same time how could I turn it down?” she says.

Now Corrigan says being a judge for the Pulitzer Prize in Fiction was one of the best experiences she’s ever had.

“I finally had the kind of conversations I thought I was going to have about literature in graduate school,” says Corrigan, who received her master’s and doctorate from the University of Pennsylvania. “I finally had those in-depth, no holds barred conversations that you think ‘This is what Hannah Arendt must have had.’”

As a judge for the 2012 Pulitzer Prize in Fiction, Corrigan read approximately 300 potential Pulitzer Prize-winning novels in just nine months.

The judges were tasked with coming up with three novels from which the Pulitzer Board chooses one.

They checked in with each other by phone or email every other week and met in person once during the National Book Festival in Washington.

“Everybody was at least a good writer, but Michael would write these beautiful essays about the books that were so moving sometimes,” Corrigan says.

Some books didn’t make it past the first test.

“We looked at a lot of stupid, self-published, narcissistic, thinly veiled memoirs,” she says. “Self-published? It’s not even passing the critical test of having a publisher look at it.”

But there were also many books that Corrigan thought were potentially Pulitzer material.

Corrigan is a very busy woman.

A 22-year member of the English department, Corrigan lives in what she calls a small row house in Northwest Washington with her husband, teenage daughter, a dog and roughly 8,000 books.

“A lot of them came in for Fresh Air and somehow stayed,” she says, as though the books made the decision.

She teaches two English department courses a semester, including American Women’s Autobiography and New York Stories, plus one course in the summer.

In order to meet all the demands on her time, she sometimes gets up at 4 a.m. just to read.

“I have a 13-year-old daughter and a husband who are always misplacing things and a dog who wants to go out at 6 a.m.,” she explains. “It’s nice to get up ahead of everybody and just be there with me and the book.”

This semester she taught New York Stories, which culminates in the native of Queens taking about 35 students to the city for an “informed, firsthand encounter.”

“We spend the semester asking, well, ‘Is New York America?’ and reading all these literary and historical texts,” Corrigan says, “and then we finally go up and confront the city.”

Corrigan’s love of reading is detailed in her 2005 book Leave Me Alone, I’m Reading (Random House).

The book includes a treatise on female adventure stories, which she argues are different from male stories such as Into Thin Air by Jon Krakauer.

“These tales of endurance are gendered,” she says. “Women have all these situations where they have to take a deep breath and endure, but they’re not in exotic locales and they’re often psychologically and emotionally challenging but they’re not about getting in shape to climb a mountain.”

She cites as examples books by the Bronte sisters as well as more recent books like Black and Blue by Anna Quindlen.

For Fresh Air, she reads right up to the deadline.

A recent typical week involved her reading two novels – Island of Vice by Richard Zaks and a nonfiction book, Lindsay Faye’s Gods of Gotham – about crime in New York.

Her NPR producer said she might need the piece on the following Monday, so Corrigan finished the second novel on Sunday and then got up at 3 a.m. to write. The piece got edited at 10 a.m. and then recorded at 11 a.m.

“It’s the greatest job for a book critic,” she says. “It’s been a great adventure, long may it continue.”

“He was on CBS Sunday Morning, he edited the New York Times Book Review and he was the book critic on Fresh Air,” Corrigan recalls. “I was invited by NPR to turn a piece I had written for the Village Voice into commentary. They wanted to check with the book critic and John’s response was ‘Sure, bring her on. There are plenty of good books to go around.’”

This happened long before Leonard’s daughter Amy became an associate professor of history at Georgetown.

“I was very lucky,” Corrigan adds.

The book critic says she got her own love of reading from her father, the late John Joseph Corrigan, who never failed to “crack open a book every night.”

Corrigan is working on her next book, So We Read On, an examination of why The Great Gatsby by F. Scott Fitzgerald is America’s greatest novel.

“Gatsby is the one great American novel that most educated Americans have read,” she says. “The bad news is that we read it in high school or even middle school.”

Reagan Arthur, an imprint of Little, Brown and Company, will publish So We Read On, the focus of a bidding war by nine New York City publishing houses.

Corrigan also expects to get more involved in the English department’s minor in journalism.

The lecturer already has taught a cultural journalism course.

And with her many connections, she has brought into class journalists such as Washington Post writers Ezra Klein and Ron Charles and New Yorker staff writer Margaret Talbot as well as filmmaker Aviva Kempner.

Many seek out her opinions on books, and she regularly put together a year-end wrap-up on the ones she thinks are best.

Though Corrigan reads new books all the time, she mostly picks classics when asked which books she’d take with her if she were stranded on a desert island.

“I’d pick The Great Gatsby, because it’s the greatest American novel ever written and the language is transcendent,” she says. “David Copperfield because Dickens is a favorite, Lucky Jim by Kingsley Amis, because it’s the funniest novel in the world if you went to grad school, Jane Austen’s Pride and Prejudice and The Big Sleep by Raymond Chandler.”