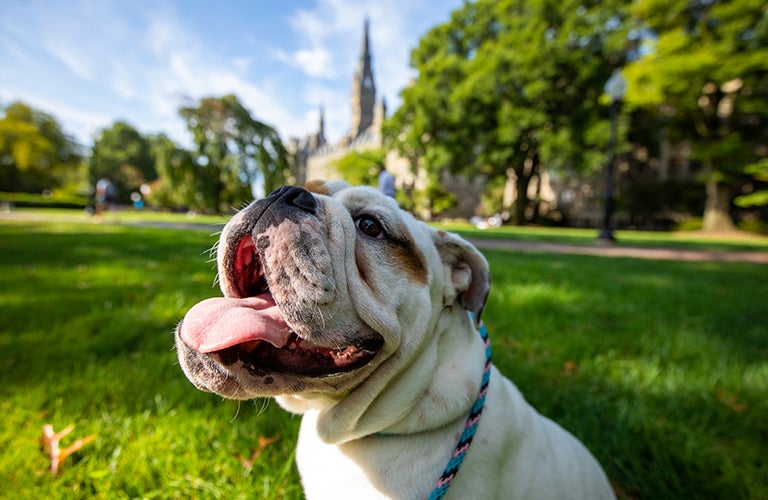 Title: New Mascot-in-Training Destined for Greatness as Jack the Bulldog

A lovable and playful puppy – the future Jack the Bulldog – is on campus and ready to learn.

The cat’s out of the bag – or should we say the puppy? Georgetown announced today that a brand new mascot-in-training arrived on campus this summer and will become the next official Jack the Bulldog.

The six-month-old bulldog was born in January in Canada. He later moved to Valley Center, California, where he began his training with breeders and Georgetown parents Janice and Marcus Hochstetler.

The dog’s new caretaker and the Jack Crew, comprising several students who help with the mascot’s daily walks, will introduce the puppy to campus on his daily walks. 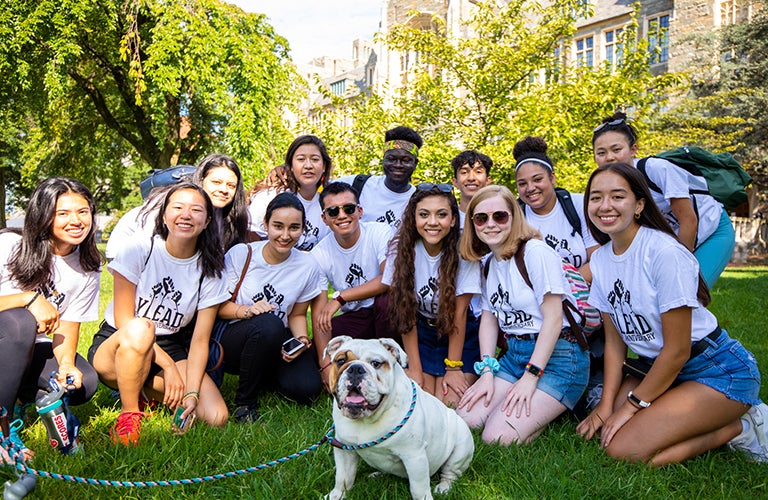 “We’ve loved getting to spend time with the new puppy as he gets used to campus,” says Jack Crew member Ellie Cush (NHS’20). “He’s a lovable and playful dog, and we are so excited to help welcome him to the entire community once he’s ready.”

During the next few months, Jack will begin attending smaller events and then move on to appearances in larger venues. While the current mascot is known for his skateboarding skills at basketball games, the new puppy’s signature move is still to be determined.

The Jack whose signature move was skateboarding is now 6, and ready to devote his full attention to napping and rooting for the Hoyas from his comfortable bed. Still healthy, he’ll live out the rest of his life in retirement with his current caretaker.

“We’re so happy that now is the time for him to be a normal pet,” says Jack Crew member Justin Iorio (SFS’20). “Jack loved his time as the mascot, but like all Hoyas, everyone has to move on.”

The university officially adopted the bulldog as its mascot in 1962. Students named the first bulldog “Hoya,” but the canine stubbornly refused (as bulldogs do) to respond to anything but his given name, “Jack.” The dog won, and students began to call him Jack, beginning a tradition that continues today.

The new puppy will be the eighth bulldog to serve as university mascot and the seventh named Jack.

Farr says the new Jack is an awesome high-fiver, and never fails to raise his paw on request.

“He is a loyal Hoya, ready to cheer on the Blue and Gray!” 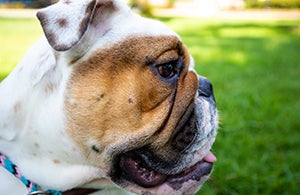 Favorite pastimes: Playing with his dog friends, Blue and Gunner, chasing his favorite green watering can and falling leaves, playing with his toy armadillo and elephant

Favorite hangouts: The lawn by White-Gravenor; the Alumni House

Learn more at the official Jack the Bulldog Website

How do students join the Jack Crew?

The Jack Crew, for which students must apply, is responsible for walking Jack twice a day (morning and evening) and escorting him to various events on campus.To become a member, students must have attended Georgetown for at least one semester, have experience with animals and be able to show evidence of school spirit. Students are also asked to learn basic information about (e.g., bulldog idiosyncrasies) and show they are comfortable with handling dogs.

“Jack is a playful, friendly bulldog who loves life at Georgetown.”