House Democratic Leader Nancy Pelosi (D-California) notes the importance of young people voting and helping to shape the country’s future during a town hall with students at Georgetown today.

– House Democratic Leader Nancy Pelosi (D-California) noted the importance of young people voting and helping to shape the country’s future during a town hall with students at Georgetown today.

“The most important thing for the Democrats and Republicans is for everyone to vote,” she said during her “Better Deal for America” conversation, sponsored by the Georgetown Institute of Politics and Public Service (GU Politics) at the McCourt School of Public Policy. “Vote. Know your power. Speak up. Be candid.”

Pelosi’s town hall comes six months ahead of the Nov. 6 midterm elections and two years after House Speaker Paul Ryan (R-Wisconsin) held a similar conversation at the university in advance of the 2016 presidential election.

GU Politics Executive Director Mo Elleithee moderated the conversation with Pelosi, asking her to describe the Democratic Party in one word.

“Any government that does not promote justice is composed of a bunch of thieves,” she said, citing early Christian theologian and philosopher St. Augustine. “Pope Benedict goes on to say … sometimes it’s hard to define justice, but in doing so we must beware of the dazzled divineness of money and special interest.”

“If you don’t vote, you really don’t count,” she added. “And whatever you believe in is ignored by those … members of Congress [who] say ‘I’m comfortable on the wrong side…’ not just the wrong side of history, but the wrong side for the future.”

Pelosi took questions during the event from students on stage, in the audience and through social media channels.

Through social media, Amanda MacDonald (G’20), a joint MBA and public policy student at Georgetown, asked Pelosi if she had come across young parents who believe in small government, but aren’t comfortable with the current direction of the GOP and feel left out of the Democratic Party.

Pelosi used education – pre-K through higher education – as an example of federal government intervention, or so-called “big” government, works to the great advantage of Americans.

She also pointed to Medicare as another way she believes “big” government provides relief for families in middle- and low-income brackets.

The congresswoman said people are often unaware that programs such as Medicare are federal programs.

“I do think more has to be done to respect the role that government does play,” she says. 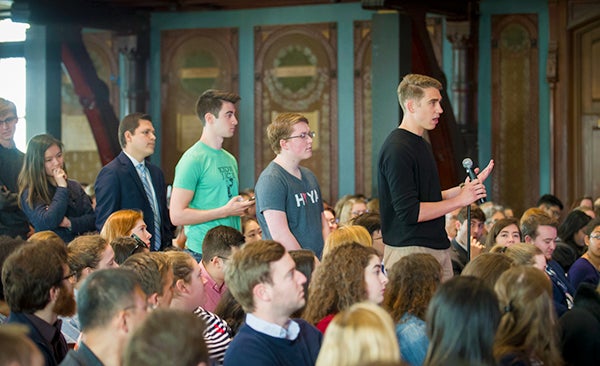 Luis Gonzalez (C’19), whose parents immigrated to the United States when he was 8, asked Pelosi how many more children of undocumented immigrants, or DREAMers, have to come to Washington, D.C. to ask Congress for a pathway to permanent citizenship before legislation is passed.

“I shared my story [with Congress] with the idea that I could change people’s hearts and if they have an open mind, they could support immigrants,” said Gonzalez, a double major in American studies and government who grew up in Santa Ana, California. “Eighty percent of American people support a permanent path for DREAMers, but Congress hasn’t done anything.”

Pelosi said it’s time to “take people out of the shadows,” and that she believes Congress will pass comprehensive immigration reform.

“DREAMers are the manifestation of the American dream,” she said. “When you talk about the economy and growth, one of the best things you can do is pass comprehensive immigration reform. One of the things to recognize is that immigration has always been in our country the constant reinvigoration of America. … This is something we should do for the good of our country.”

Pelosi’s visit to Georgetown brings her back to the place she received her honorary doctorate in 2002. Several of her children have graduated from the university, and her husband, Paul (C’62) was in the audience today with their grandson, a sophomore in the School of Foreign Service.

“I feel very at home here,” she told the audience.