A Georgetown biology alumnus collaborates with his former professor on a $2 million grant to control a mosquito that spreads diseases such as Zika and dengue around the world.

A Georgetown biology alumnus is collaborating with his former professor on a $2 million grant to control a mosquito that spreads diseases such as Zika and dengue around the world.

Verily, a subsidiary of Google, focuses on life sciences and health care. 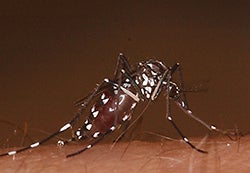 “My passion for working on new ways to make an impact on mosquito-borne diseases started with my time working with Peter,” Crawford says, “so it is both fitting and extremely gratifying to work with him again on a project that complements both of our research programs so well.”

Armbruster says that reconnecting with Jacob on both a personal and professional level has been an ”incredibly rewarding experience.”

The subject of their research, the Asian Tiger mosquito, is capable of transmitting at least 26 viruses.

Besides Zika and Dengue, the insect can carry two types of encephalitis and Chikungunya. 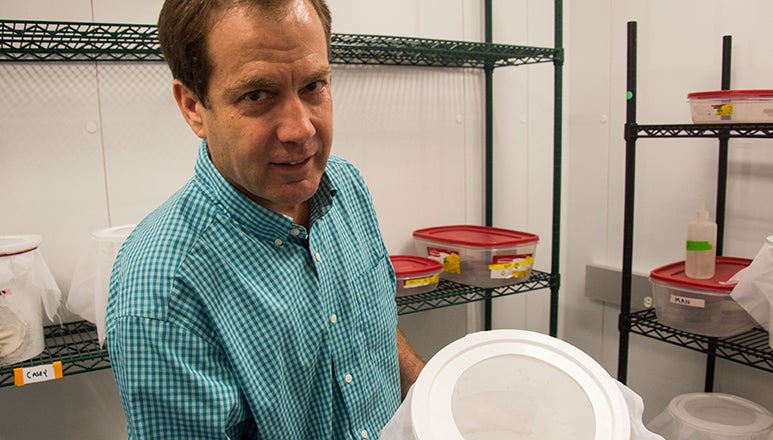 “Concern is rising in the eastern United States, where this mosquito occurs at high densities and is often the most prevalent and aggressive biting mosquito in large metropolitan areas such as Washington, D.C.,” Armbruster says.

Crawford and Verily are collaborating on the NIH grant by sequencing 1,000 genomes of Asian tiger mosquito samples from around the world.

The researchers will use data from the sequenced genomes produced by Verily to develop a cost-effective and readily accessible SNP chip.

The SNP chip is a glass slide with bits of DNA tethered to the slide.

DNA may be extracted from an individual insect and washed over the chip so the DNA binds to the chip’s tethered pieces and determines which genetic variants the individual contained.

“This is the same technology that is used by 23andMe to determine human ancestry, so what we are doing is essentially 23andMe for mosquitoes,” Armbruster explains.

The chip would then be used by the Aedes albopictus research community to investigate a wide range of important biological processes, from detecting the origin of new invasions to elucidating the genetics of vector competence and insecticide resistance.

After graduating from Georgetown, Crawford pursued a Ph.D. in entomology from Cornell University, which he received in 2012.

Following an NIH fellowship at the University of California at Berkeley between 2013 and 2015, he joined Verily.

“To see him flourishing in a career that has its roots in his work with me when I started my lab at Georgetown feels great,” Armbruster says of the collaboration. “I feel like I’ve gone from teaching Jacob about mosquito biology and evolution to learning from him about modern genomics approaches, and so that is both humbling but also very fun, to learn so much from someone I once taught.”