António Guterres, the United Nations High Commissioner for Refugees (UNHCR), told a Georgetown audience yesterday that despite the current spotlight on the Syrian refugee crisis, the international community should focus on situations that pose a greater threat to global peace and security.

–Despite the current spotlight on the Syrian refugee crisis, situations that pose a greater threat to global peace and security should be the focus of the international community, António Guterres, the United Nations High Commissioner for Refugees (UNHCR), told a Georgetown audience yesterday.

“What has changed is not that the refugee problem has become, all of a sudden, much more dramatic,” Guterres said during a Georgetown Global Futures lecture.“What has changed is that refugees, for the first time, have come in big numbers to the rich world.” 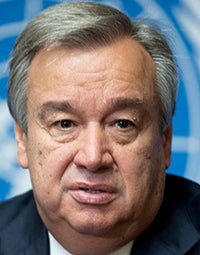 The High Commissioner, whose agency has twice won the Nobel Peace Prize for its work protecting and assisting displaced persons, called on the international community to focus instead on protracted situations such as the crises in the Central African Republic, Somaliaand Afghanistan –that he said require assistance from world leaders and the development community alike.

Guterres’ lecture, “Present and Future Challenges of Global Forced Displacement,” takes place at a time when the number of people uprooted by conflict and persecution stands at its highest since World War II, according to UNHCR.

One solution Guterres proposed is making the International Organization of Migration a part of the United Nations and giving itsome regulatory capacity.

“Lack of capacity of the international community to prevent crises and to solve them timely is having terrible consequences in thehumanitarian dimension,” he said.

Susan Martin, director of Georgetown’s Institute for the Study of International Migration, joined Guterres on stage after his remarks for a conversation and a Q&A with the audience.

She asked what role the United States can play in alleviating ongoing refugee and humanitarian crises.

Guterres responded thatthe United States needs to increase its commitment to humanitarian aid and act as a role model for other governments.

“The resources available for humanitarian aid are out of proportion – negatively – to the existing needs,” he explained.

Guterres also said America should act as a convening power, bringing togetherkey stakeholders in each crisis. He said this “coalition of the willing” could help deescalate conflicts.

In his introductory remarks, President John J. DeGioia referenced Pope Francis’ comments about the refugee crisis and the obligation that everyone, including Georgetown, has to our “global family.”

“The challenges we are facing today… we must respond to as a global community,” DeGioia said.

The event continued a semester-long conversation about “The Global Future of Governance,” convened by Georgetown’s Global Futures Initiative.