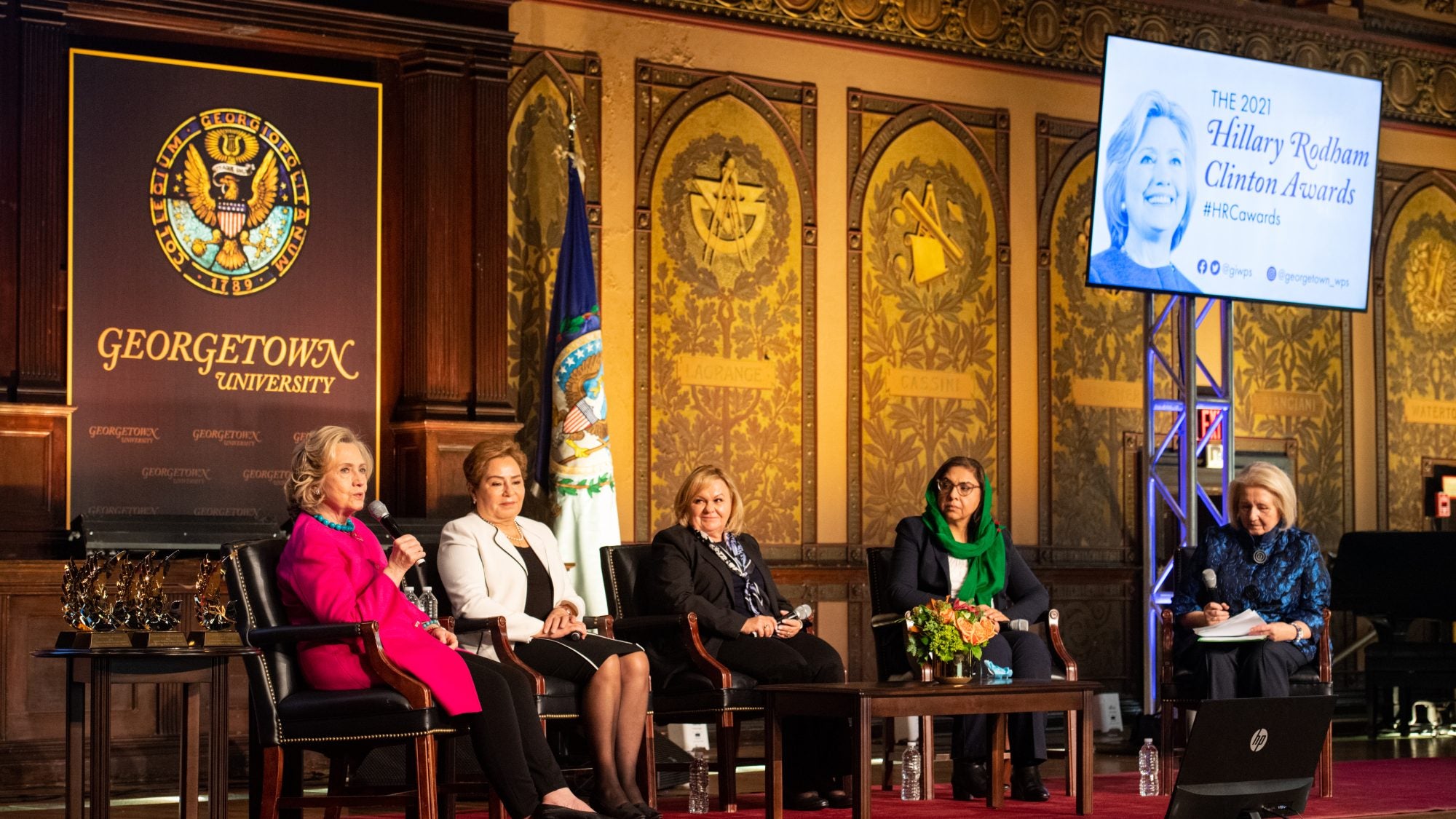 “Each of these five women have shown exceptional courage, creativity, strength, wisdom and of course, leadership,” said Clinton, who is an honorary founding chair of GIWPS. “Let them be a reminder to us to keep up this fight. We have a lot at stake, and we need women leaders from every corner of the globe to continue to stand up, to speak up, and yes, to seek power.”

This year’s awards commemorated the 25th anniversary of the historic 1995 United Nations’ World Conference on Women in Beijing, a turning point for women’s rights in which 189 countries adopted an action plan for gender equality. At the conference, Clinton famously said, “Human rights are women’s rights and women’s rights are human rights.”

The five award recipients all attended the 1995 conference in Beijing. A quarter of a century later, three of the five reunited in Gaston Gall to reflect on their work in the years since to build a more peaceful, stable world for women.

Speakers at the event, including Clinton, President John J. DeGioia and GIWPS Executive Director Melanne Verveer, underscored the award recipients’ advancement of women’s rights since 1995, and the progress still needed for equality around the world.

“As we continue to commemorate the 25th anniversary of the 1995 world conference, we recognize the resounding impact of the words Secretary Clinton offered that day, words that animate our convening today,” President John J. DeGoia said in his opening remarks. “We are honored to present the Hillary Rodham Clinton Awards for Advancing Peace and Security in recognition of the leadership of Secretary Clinton and the contributions of our awardees, who exemplify what it means to serve, protect and empower vulnerable populations.”

Clinton is a former U.S. senator and secretary of state, and the first woman to become the Democratic nominee for president in 2016. She is also an honorary founding chair of the Georgetown Institute for Women, Peace & Security. 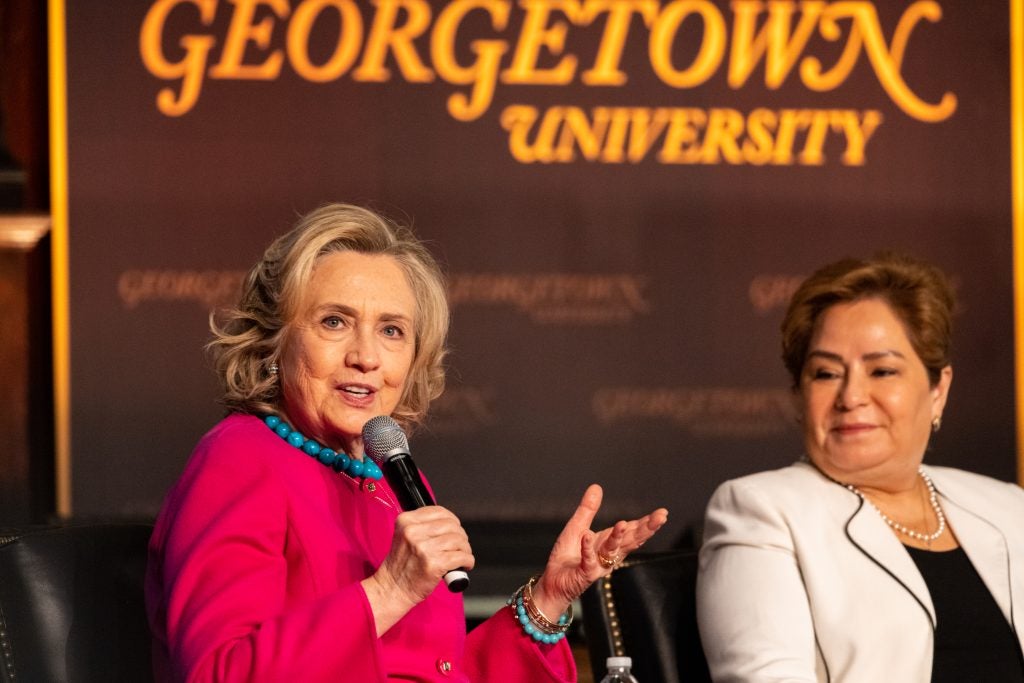 We are in the midst of a global struggle between the ideals of this institute [the Georgetown Institute for Women, Peace & Security], and a rising tide of authoritarianism, which has unsurprisingly, coincided with a crackdown on women’s rights.

Despite how easy it is sometimes to get discouraged at setbacks and challenges, I look at our five honorees, and I cannot help but be encouraged. They never quit.

Espinosa is the executive secretary of the United Nations Framework Convention on Climate Change (UNFCCC) and has worked to address the global challenge of climate change. 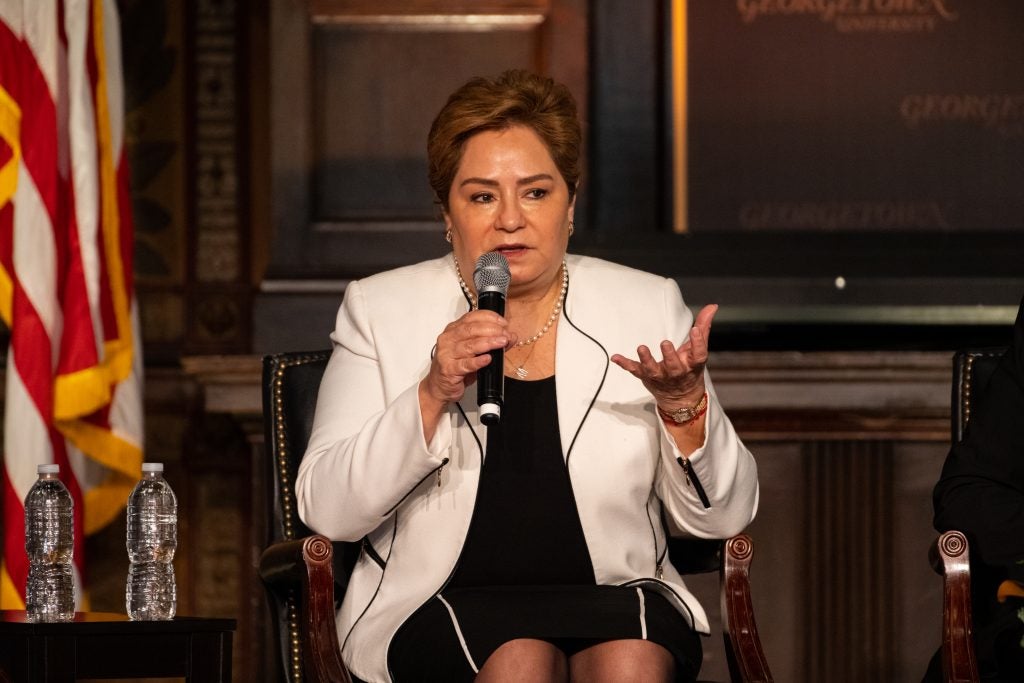 Climate change is the biggest threat to humanity, and it affects women disproportionately. So, it would be the logical conclusion to make sure that women are also taken into account in the solutions to climate change, but that is not the case. How can we get a solution for a global problem if we are not fully taking into account half of the population of the world – their needs, their perspectives, their specific realities?

Dr. Pisklakova-Parker established the first domestic violence hotline in Russia and founded a network of crisis centers across Russia called the National Center for the Prevention of Violence (ANNA). 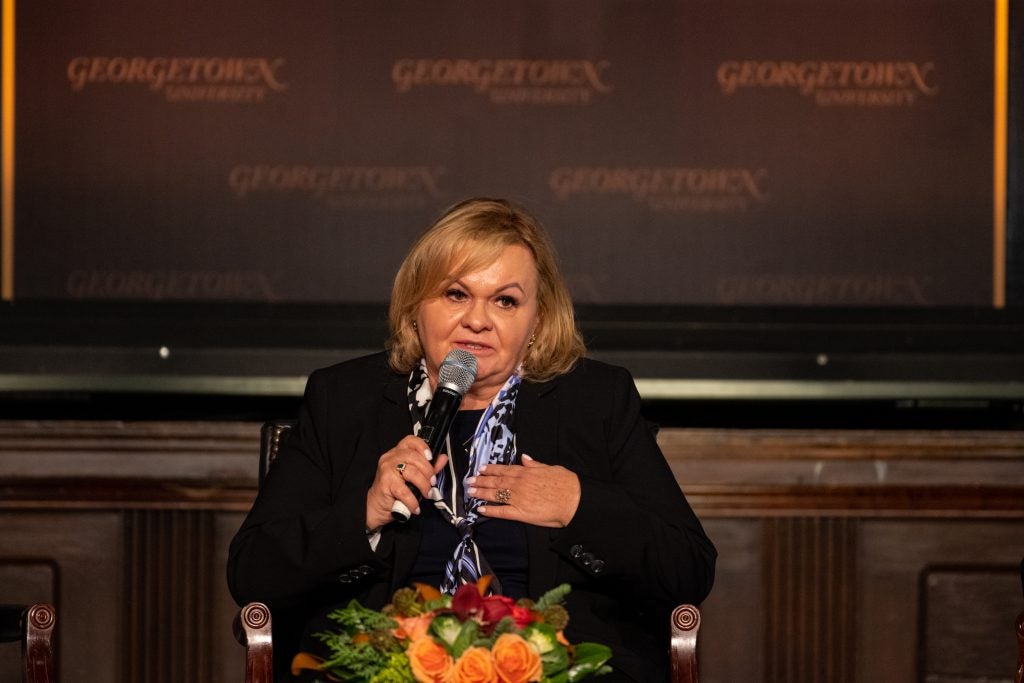 Hassan is a leader in the Afghan women’s movement, a fellow at the Georgetown Institute for Women, Peace & Security, and directs the Afghan Women’s Educational Center, which advocates for women’s rights in Afghanistan. 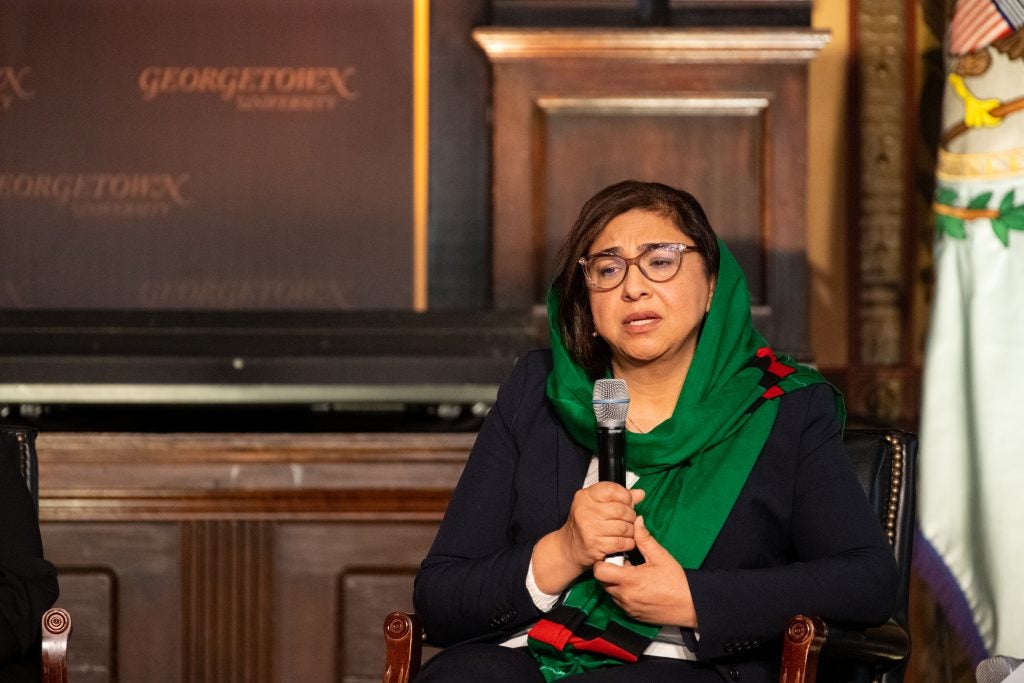 We are global citizens and we should look beyond our borders and territory to feel what others are going through, and how we can all together change the world. I accept this award on behalf of all strong Afghan women, who wake up every morning with a new challenge, but they stand tall and resilient as ever.

Dr. Gumbonzvanda works with women and children in low-resourced communities in Zimbabwe as the African Union Goodwill Ambassador on Ending Child Marriage. 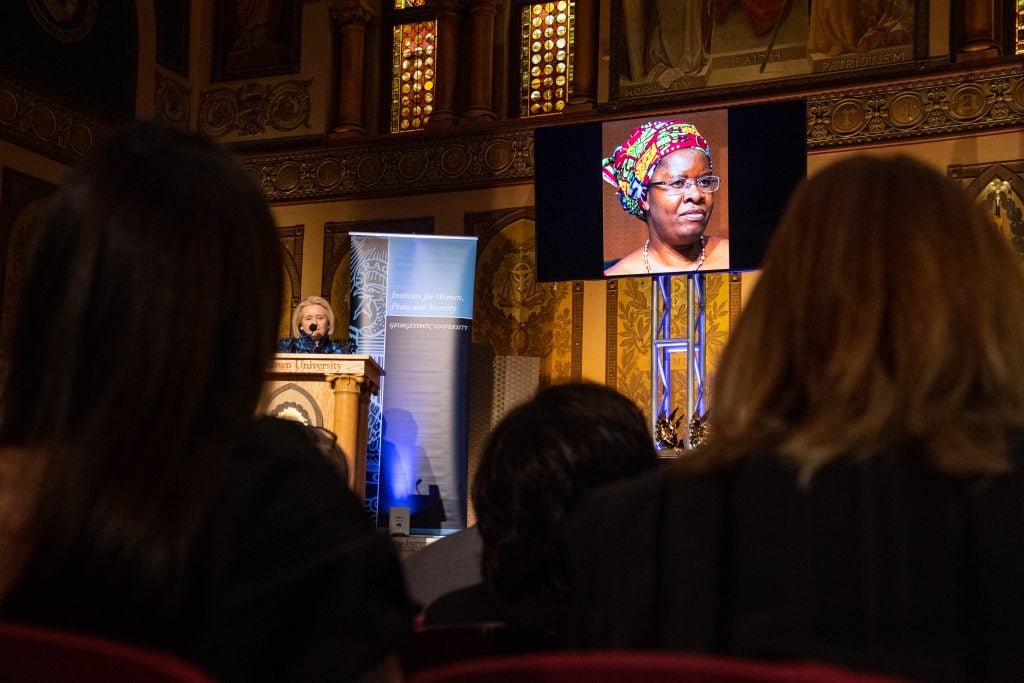 For some of us, fighting for human rights is not a choice. It is a duty. It is a way of life.

Jianmei safeguards women’s rights in China through the pro bono legal aid, despite confronting harassment and risking her own security, and founded The Center for Women’s Law Studies and Legal Services. 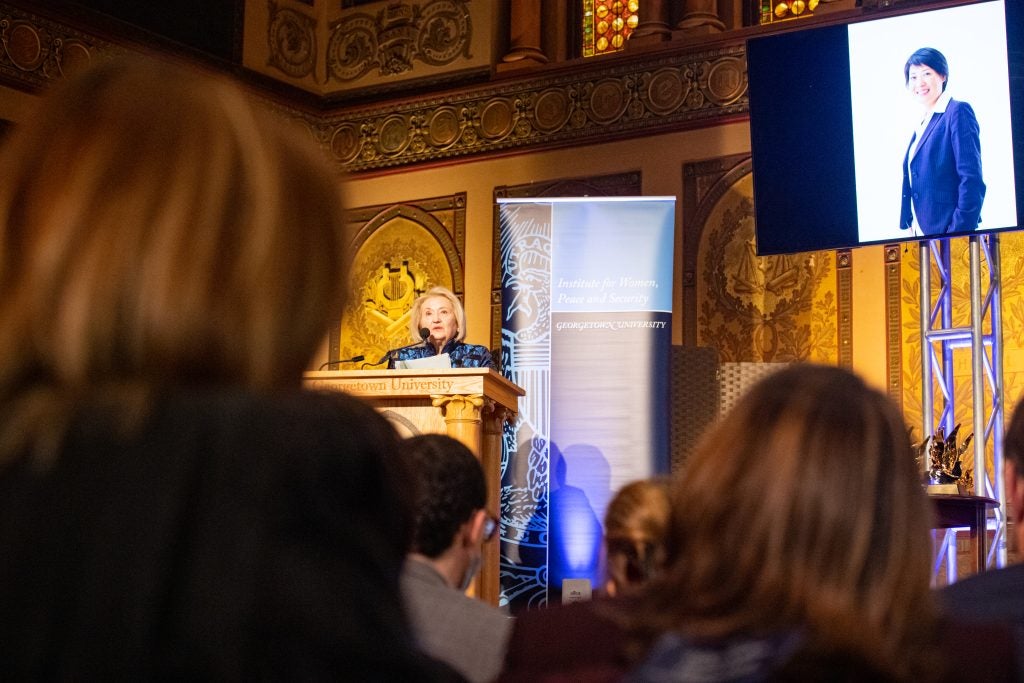 I continue to try to support women’s rights, and I want to thank Secretary Clinton for meeting with me in China in 2010.

Culoso is a Georgetown Storyteller who first met Secretary Clinton when she was a young child. After seeing her at Georgetown’s Hillary Rodham Clinton Awards, she said she better understood Clinton’s influence on her own path.

Seeing her speak today, alongside other incredible women, I understood the magnitude of meeting her at such a young age. I am inspired by Secretary Clinton, like many other women around the world, to believe in a future for women, to fight for the rights of all women and girls around the world, and above all, to be proud to be a feminist and woman capable and making real change.

Iyengar volunteered to hand out seating tickets at the event as part of his work with the Institute of Politics and Public Service at the McCourt School of Public Policy. 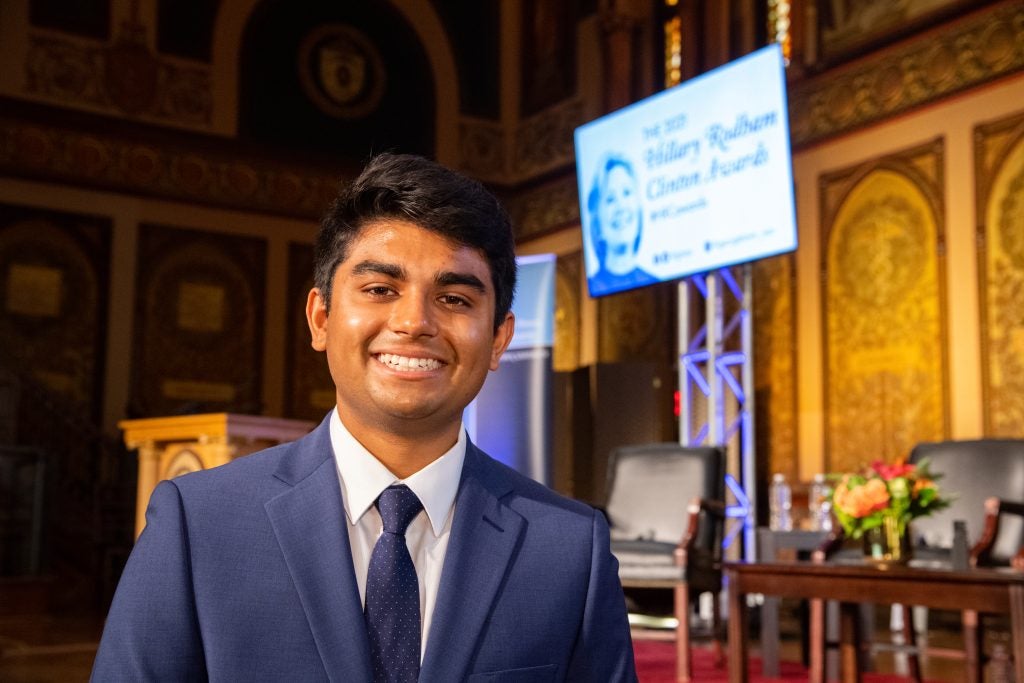 The event did a great job of recognizing women who might otherwise go unseen in their fight for human rights, as I had not really been exposed to any of them before. The event was eye-opening and humbling to me, and I am confident that we will continue the journey towards equality and peace in our world so that everybody is entitled to the same human rights regardless of who they are.