The ceremony featured remarks by Rep. Jeff Fortenberry (R-Nebraska), who serves on the House’s Appropriations Subcommittee on Veterans Affairs and received a master’s degree in public policy from Georgetown in 1986. 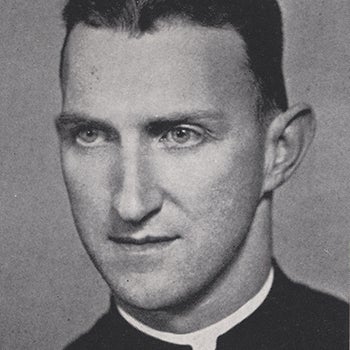 O’Gara joined the Georgetown faculty in 1940, leaving two years later to become a chaplain in the Air Transport Command.

He was returning to the United States from India after the war when the plane caught fire and crashed on June 1, 1946.

Instead of saving himself, he helped eight passengers escape before the plane crashed, killing O’Gara and at least eight others.

“Father O’Gara was among the first at the door … but before diving out to comparative safety, he looked back to see many of his fellow passengers still struggling to get into their parachutes,” reads a 1946 article found in the Georgetown archives called “Providence Personified,” originally in a book calledFar Away Missions. “So, with the complete self-forgetfulness in the service of others that had ever been his, he stepped away from the door and went to their aid, directing panic stricken arms into the proper loops in the harness and showing their fear-numbed bodies out the escape hatch.”

“Thus perished a man whose love for God knew no bounds.”

Before his death, O’Gara helped raise money for an orphanage in Calcutta and on one occasion during the war made a dangerous trip to airdrop food and clothing to a leper asylum in Burma.

This is the second time Georgetown has honored O’Gara – a solemn requiem field Mass took place at the university in 1946, the year the plane went down.

“It is fitting that we honor Father Martin J. O’Gara once more here at Georgetown, for like the Catholic faith that inspired him and continues to inspire this university, Georgetown is a living tradition, alive to those who have shown extraordinary service and the ultimate sacrifice for others,” Rev. Mark Bosco, S.J. said. “We grow more deeply connected to our Jesuit and Ignatian roots when we can hold up such a beloved teacher, who risked his life in war to help his fellow man.” 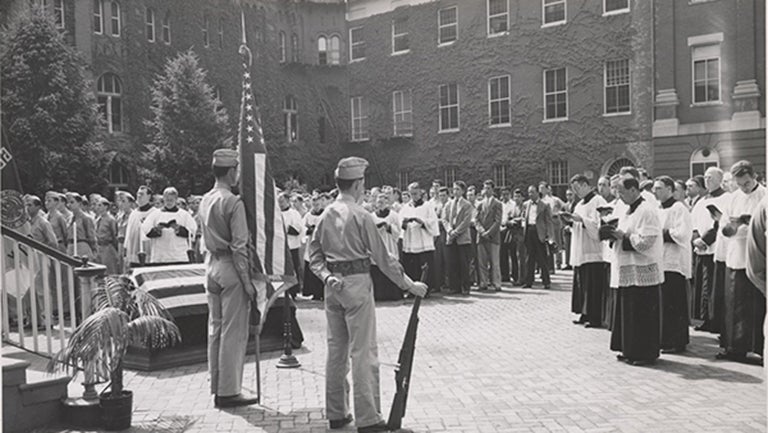 The terrace, which is between Dahlgren Chapel and the student residence Village C, has been adorned with a plaque describing his time at Georgetown and his heroic act.

“Father O’Gara is one example of many Hoyas who have dedicated and sacrificed their lives to service,” Pedersen said. “While we hear of these people in stories and in film, my hope for the Georgetown community is that we never forget these heroes are amongst us and when they depart, we must never forget them or their sacrifice.”