Georgetown and Medstar National Rehabilitation Network team up to create the Center for Brain Plasticity to research plasticity as recovery tool in conditions such as stroke, traumatic brain injury, multiple sclerosis and dementia. 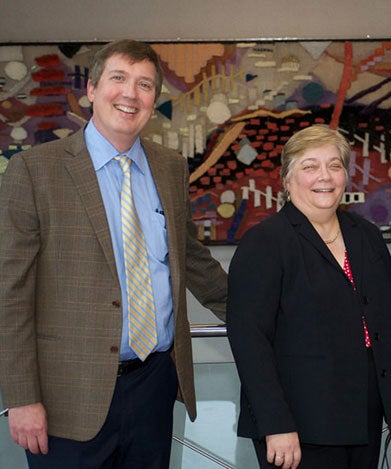 Elissa Newport will serve as director and Dr. Alexander Dromerick will serve as co-director of the new Center for Brain Plasticity. Both are professors in Georgetown’s neurology department.

Research in neural plasticity, the process underlying the brain’s ability to learn and develop, got a huge boost today asGeorgetown University and MedStar National Rehabilitation Network announced its new Center for Brain Plasticity and Recovery.

The collaboration will allow for the immediate application of new approaches to clinical treatment of stroke, which is the first focus of the center.

Stroke is one of the most common neurological disorders in the U.S. and is likely to rise with a rapidly aging population.

“Breakthroughs on these important challenges are within our grasp but require a highly interdisciplinary approach that is still rare among top research universities,” says Dr. Howard Federoff, executive vice president for health sciences at Georgetown University Medical Center (GUMC).

Federoff is also executive dean of Georgetown’s School of Medicine.

Elissa Newport has just joined GUMC to serve as director of the Center for Brain Plasticity, while Dr. Alexander Dromerick, a professor of rehabilitation medicine and associate medical director for research at MedStar National Rehabilitation Hospital, is the center’s co-director and one of Newport’s new collaborators in this work. Both Newport and Dromerick are professors in the Department of Neurology at Georgetown.

“Significant gains in neuroscience research are attainable by bringing together teams of scientists and clinicians,” Newport says. “[The center will comprise] a rare interdisciplinary integration of neuroscience research across the spectrum, from genetic and molecular to behavioral and cognitive levels of analysis, bridging basic science and clinical application.”

Newport joined the university on July 1 from the University of Rochester, where she was the George Eastman Professor of Brain and Cognitive Sciences.

Her primary research interest is in human language acquisition, with research projects including naturalistic studies of children learning their first languages, experimental studies of infants, adults, and non-human primates learning miniature languages in the lab.

Dromerick’s primary research interests focus on recovery from stroke and the rehabilitation of patients after a stroke. He also has extensive experience conducting national clinical trials for treatment and rehabilitation.

“Most of the nationally prominent rehabilitation hospitals are not partnered with the scientific laboratories of a major university, and most of the top scientific research programs on neural plasticity are not focused on enhancing recovery in humans,” Dromerick explains. “The [new center] offers powerful insights for restoring optimal function after a variety of insults to the brain, and the realistic opportunity to dramatically change the lives of people affected by these disabling diseases.”

The outcome of a multiyear strategic planning process, the Center for Brain Plasticity and Recovery is a top priority for GUMC, which is committed to advancing scientific understanding and human health through biomedical research, particularly neuromedicine.

In May, Georgetown announced a $1.25 million gift to establish the George Bergeron Endowed Professorship in Neuroscience in the Brain Center. His son and daughter-in-law, Doug and Sandra Bergeron of Atherton, California, made the gift in Bergeron’s memory to support an exceptional scientist in the Center for Brain Plasticity and Recovery.

The Center for Brain Plasticity is a strategic priority for the Medical Center and part of the university’s $1.5 billion fundraising campaign, For Generations to Come.