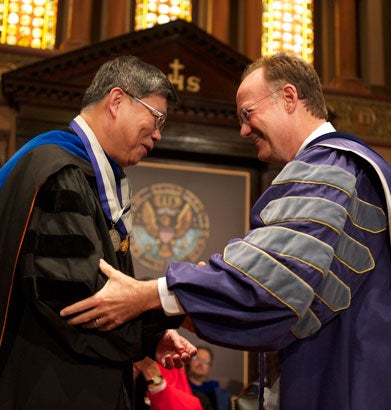 –Two professors one renowned for applications in math, the other for helping create a vaccine for human papillomavirus (HPV) – each received the President’s Award for Distinguished Scholar-Teacher during Fall Faculty Convocation Oct. 15.

Der-Chen Chang, professor of mathematics and statistics in Georgetown College, and Dr. Richard Schlegel, professor and chair of pathology in Georgetown’s Lombardi Comprehensive Cancer Center, are the first to receive the new award for their accomplishments in research and effectiveness in teaching.

“[The awardees] teach us every day that these two sides of an academic (research and teaching) are not in conflict, but can be jointly achieved,” said Georgetown Provost Robert Groves before the recipients received their medals. “By naming these presidential fellows we hold them up as models for us all.”

Chang, who is also a special assistant to the provost for China initiatives, conducts research using the Fourier analysis. Fields such as robotics, acoustics, medical imaging, video compression and other digital technology have ushered in uses for Fourier transforms, for which Chang’s scholarship is recognized around the world.

Schlegel is renowned for his seminal contributions to creating vaccines for the human papillomavirus (HPV) – one of the main causes of cervical cancer throughout the world. His more recent research accomplishments are focused on new ways to grow and study cells in the lab with the goal of improving the precision of drugs for diseases such as cancer.

The importance of a new cell culture technique developed under his leadership – which has come to be known as the Georgetown Method by others in the field – was formally recognized last year when GUMC created the new Center for Cellular Reprogramming and tapped Schlegel as the director.

Georgetown is participating in a new biotechnology company, Propagenix, recently formed to commercialize aspects of this methodology.Schlegel’s work centers on better understanding HPV and its role in causing cervical cancer. His decades-long commitment helped lead to the Gardasil vaccine, the vaccine to protect women from HPV infection. 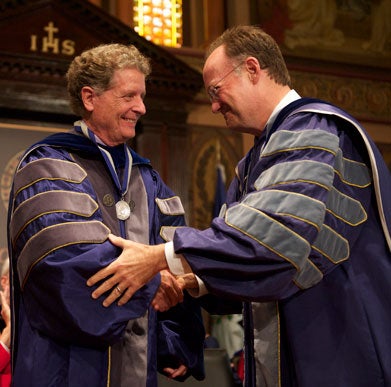 Dr. Richard Schlegel, professor and chair of pathology in Georgetown’s Lombardi Comprehensive Cancer Center, receives the first President’s Award during Fall Faculty Convocation for his accomplishments in research and effectiveness in teaching.

Chang and Schlegel also have been recognized for their teaching methods throughout their careers, earning high reviews from their students.

“[The students] have nominated Schlegel for the title of Graduate Student Professor of the Year, asked him to serve on their thesis committees and continually sought his advice as they pursued their undergraduate, M.D.s and Ph.Ds,” Georgetown President John J. DeGioia said during the award presentation.

Chang also has received the Bunn Award for Faculty Excellence, awarded by the senior class, and the Award for Excellence in Teaching.

“Both undergraduate and graduate students seek his classes and his mentorship,” DeGioia said.

Hunter Rawlings, president of the Association of the American Universities, served as the keynote speaker at the convocation. Rawlings reiterated the importance of faculty having a good balance between research and teaching during his “Aims of Education Address.”

“I see some good signs now that the balance between teaching and research is being restored,” he added. “We see signs of that today in this ceremony, which I applaud.”

“The sudden rise of MOOCs [massive open online courses] and other online innovations have clearly signaled a period of experimentation and uncertainty in our enterprise,” he said.

DeGioia said Georgetown faculty and leadership will continue to identify ways to be innovative and meet the higher education needs of the 21st century.

“This is a conversation we will be having as a community in the coming months,” he said, “through a visioning process led by our provost.”