Alex Marquardt (SFS’04), an ABC News foreign correspondent covering conflicts throughout the Middle East and Europe, credits his time at Georgetown for his career path.

SEPTEMBER 8, 2014 DESPITE HAVING BEEN AT the front lines of numerous conflicts, ABC News Foreign Correspondent Alex Marquardt (SFS’04) says what he recently saw in Gaza was “the worst” he’s ever seen.

Hearing two Israeli airstrikes right by their hotel one day while covering Israel’s Operation Protective Edge, the Georgetown alumnus and his producer grabbed a camera and ran across the beach with the paramedics toward the site of the first strike.

“Digging through the still-burning wreckage of a shipping container, the medics yelled ‘Allahu akhbar’ (God is great) as they uncovered the body of one of the young boys,” Marquardt recalls.

“I’ll never forget the way his body looked, charred and twisted as the paramedics placed himonto a stretcher.”

Three other boys – all from the same family – were also found dead, victims of a second strike. 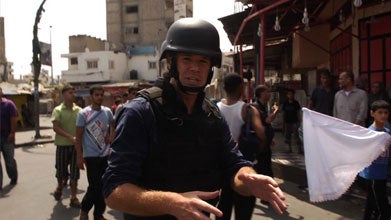 Marquardt describes reporting on the conflict between Israel and Gaza, where this photo was taken, as “uniquely challenging because so many viewers around the world are emotionally invested in the story in a way that they perhaps aren’t in other conflicts.”

“It was an incredibly emotional scene, all of us trying to make sense of how four young boys doing nothing more than playing on a beach could be targeted,” he says.

After three weeks in Gaza, Marquardt moved north to report on the other side of the conflict from Jerusalem. Having lived in Israel for two and a half years, he says he learned what it’s like for Israeli parents to have their children called up to war or live in communities where rockets have landed.

“Reporting on this conflict is uniquely challenging,” Marquardt says, “because so many viewers around the world are emotionally invested in the story in a way that they perhaps aren’t in other conflicts. That makes it especially important to be as objective as possible.”

“I have no doubt I’m doing this because of Georgetown,” says Marquardt, a Science, Technology and International Affairs major who credits the university’s School of Foreign Service and its station, GUTV, with the start of his career in journalism.

“As a kid I grew up in several countries in the Middle East and Europe, so I came to Georgetown already fascinated with the world around me,” he says. “But the School of Foreign Service took that and amplified it and gave me the tools to better understand how the world works that would be crucial in doing what I do now.”

During his time at Georgetown, Marquardt joined GUTV because of a crush he had on a classmate, but stayed after she left because he enjoyed producing the channel’s shows.

Marquardt, who initially moved to Jerusalem and Beirut to report on the Middle East, is currently reporting on the radical Islamic State of Iraq and Syria and the efforts to combat them in Northern Iraq.

After graduating from SFS in 2004, Marquardt pursued his interest in television as a member of NBC’s Page Program.

While he knew he wanted to be involved in broadcasting, Marquardt wasn’t sure what his exact role would be until July 7, 2005, the day of the London terrorist bombing attacks.

When he saw the NBC Today Show newsroom “spring into action,” he knew he’d found his calling.

Marquardt went on to become an anchor and correspondent at Channel One News, and later an embedded off-air reporter for CNN during the 2008 presidential election. He joined ABC News in June 2009 to cover Russia and Central Asia from Moscow and later moved to Jerusalem and Beirut to report on the Middle East.

These days, Marquardt’s assignments take him well beyond the Middle East.

He spent most of this year covering the crisis in Ukraine from its early days in Kiev, to the Russian invasion of Crimea and the unrest in the Eastern part of the country.

“A conflict like that,” Marquardt says, “can in a way be more challenging than covering the Israel-Gaza war because it’s not as familiar or relevant to much of the audience.”

With that in mind, he tried to bring his stories home to American viewers by tying them to larger U.S.-Russian relations issues, exploring the impact that the growing East-West divide could have.

Marquardt says Eastern Ukraine has featured “increasingly trigger happy” rebels often keen to push journalists around. There were endless checkpoints, days of driving on terrible roads and spotty communication that made reporting challenging.

In contrast, the takeover in Crimea was relatively easy to cover, he says. There was little direct violence, no real front line and freedom of movement for journalists, but the speed of events surprised him.

“Overnight, thousands of unidentified ‘little green men’ (as they came to be known) appeared and over the course of a few days essentially took over this peninsula of two million people without firing a shot,” Marquardt says of the takeover. “To witness an international border shift so dramatically and so quickly in the 21st century was pretty remarkable.” 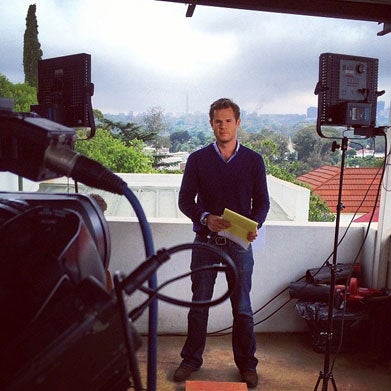 Marquardt calls his time covering Nelson Mandela’s death and funeral in South Africa last year as one of his most humbling assignments.

Marquardt says one of his most humbling assignments this past year was reporting on Nelson Mandela’s death.

He traveled to South Africa several times while Mandela was ill and recalls scenes of thousands of South Africans joyously celebrating Mandela’s life when the former president passed away.

As lines of South Africans of all ages and stripes snaked through the streets of Pretoria waiting to see Mandela lying in state, Marquardt says it was remarkable to see how in just 20 years, such a deeply divided country had come together.

One scene he witnessed that day – a white police officer helping a young black child – “is something you probably wouldn’t have seen 20 years ago,” he says.

In the week of mourning that followed Mandela’s death, South Africans took to the streets and the country’s biggest soccer stadium to sing and dance, commemorating Mandela’s life.

It’s a thrill and a privilege being in a place that’s at the center of the biggest story around.”

“It was striking for me because these weren’t the types of scenes you would see in the US when someone dies, we’re used to a much more somber affair,” he says. “It was a true taste of South Africa, people from all walks of life coming together and joyously celebrating the life and legacy of this great man.”

Marquardt is now in Northern Iraq, reporting on the radical Islamic State of Iraq and Syria and the American and Iraqi efforts against them.

“It’s a thrill and a privilege being in a place that’s at the center of the biggest story around,” he says.