FBI director James Comey talks about law enforcement and race in light of recent events during his speech at Georgetown.

FEBRUARY 12, 2015LAW ENFORCEMENT MUST ACKNOWLEDGEa tainted past in terms of racial bias, and police and those they serve must learn to see each other as well-intentioned but complicated human beings, Director James B. Comey told a Georgetown audience today. 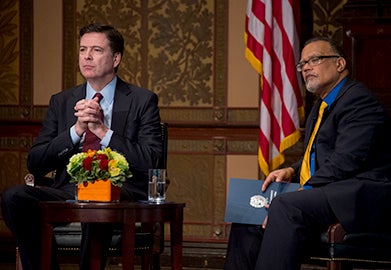 FBI director James Comey and Edward Montgomery, dean of Georgetown’s McCourt School of Public Policy, listen as a student asks the FBI leader a question during his Feb. 12 visit to Georgetown.

In a speech titled “Hard Truths: Law Enforcement and Race,” Comey said the recent killings of unarmed young black men by law enforcement, protests about the deaths, and the avenge murders of two New York Police Department officers, has put America “at a crossroads.”

“Unfortunately, in places like Ferguson, in New York City, and in some communities across this nation, there is a disconnect between police agencies and the citizens they serve, predominately in communities of color,” he said.“But I worry that this incredibly important and difficult discussion about race and policing has been focused entirely on the nature and character of law enforcement officers when it should also be about something much harder to discuss.”

The harder discussion, he explained, is that police officers often work in communities where young men of color commit a “hugely disproportionate amount of street crime.”

“Something happens to people of good will working in that environment,” he said. “After years of police work, officers can’t help but be influenced by the cynicism they feel.”

But he also noted that law enforcement has over the years been “brutally unfair to disfavored groups,” especially people of color, and that these communities have been subject to many types of inequalities for generations.

“So many boys and young men grow up in environments lacking role models, adequate education and decent employment,” Comey said. “They lack all sorts of opportunities that most of us take for granted.”

He decried the cutting of local budgets for police athletic leagues and other programs that bring police into greater contact with the people they police, saying that it is “hard to hate up close.”

“Perhaps the reason we struggle as a nation is because we’ve come to see only what we represent instead of who we are,” he said. “We simply must see the people we serve. But the seeing needs to flow in both directions. Citizens also need to really see the men and women of law enforcement.”

Comey noted that reporting officer-involved shootings to the FBI is voluntary, making “our data is incomplete and therefore in aggregate unreliable.”

“The first step in understanding what is really going on in our communities and in our country is to gather more and better data related to those we arrest, those we confront for breaking the law and jeopardize public safety, and those who confront us,” he said.

A “big city police chief” recently expressed frustration that he had no way of knowing if police in Ferguson, Missouri, shoot one person once a week, once a year or once a century, Comey said.

“And in the absence of good data, he told me, quote, ‘all we get are ideological thunderbolts, and what we need are ideological agnostics who use information to try to solve the problems. ”

The FBI director said that because the government agency needs such data to “get better,” he intends have the “FBI … be the leader in urging departments around this country to give us the facts we need for informed discussion, the facts all of us need to make sound policy and sound decisions.”

Comey said he wanted to speak at Georgetown on law enforcement and race because its history includes the first African American university president, Patrick Healy, S.J., who served at Georgetown from 1873 to 1882 and whose mother was born a slave.

It was also no accident Comey spoke on the birthday of Abraham Lincoln, who spoke at Gettysburg of a “new birth offreedom” that would bring equality to all American citizens.

“As a nation we have spent 150 years since Lincoln spoke making great progress, but along the way treating a whole lot of people of color poorly and law enforcement was often part of that poor treatment,” Comey said. “That’s our inheritance as law enforcement and it is not all in the distant past. We must account for that inheritance and we, especially those of us who enjoy the privilege that comes with being the majority, must confront the bias that are an inescapable part of the human condition.”