Georgetown history professor Maurice Jackson says Washington, DC has secured a legacy of jazz linked to the struggle for civil rights and the music’s global reach.

Jackson, a scholar of the 18th-century Atlantic world and African American history and culture, says jazz told the story of Washington’s struggle against segregation and inequality well after the District’s enslaved African Americans were emancipated in 1862.

“Jazz was the popular music of the time during the early part of the 20th century – it came out of the experiences of the people,” says Jackson, who also teaches a Jazz and Human Rights course at Georgetown. “The great poet Amiri Baraka said it best that to understand the music, you must understand the musicians and the city where they are from.”

The historian recently co-edited DC Jazz: Stories of Jazz Music in Washington, DC (Georgetown University Press, 2018) with author and urban historian Blair Ruble to explore the history of the genre in the city.

They note that Congress declared jazz to be an “American national treasure” in 1987.

Anna Celenza, another Georgetown professor, wrote a chapter in the DC Jazz book on jazz legislation. 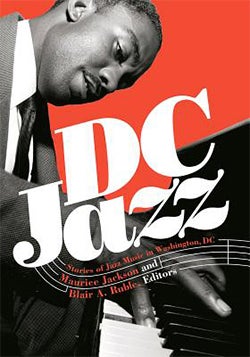 The Thomas E. Caestecker Professor of Music in the performing arts department, Celenza notes that the genre’s global reach was enhanced by the U.S. State Department’s establishment of the Jazz Ambassadors program that ran from 1956 to the late 1970s.

She says the program’s intent also was to help smooth over the world view of racial and civil rights struggles in the United States.

“By 1950, politicians regularly declared race as the ‘Achilles heel’ of American foreign policy,” she wrote. “[President] Eisenhower went in search of a home-grown, cultural product that could be exported around the world as proof of American innovation and diversity.”

Prominent jazz musicians such as Duke Ellington, James Reese Europe and Shirley Horn were among the jazz greats from Washington, DC.

“James Reese Europe was born in Alabama and came to Washington at the age of 10,” Jackson explains. “He went off to serve in World War I France as a lieutenant and member of the military band and shared his blend of what they call march music overseas.”

Much later, Billie Holiday, Ella Fitzgerald, John Coltrane and Miles Davis would be among the jazz legends to grace the stages of the historic Howard Theatre, Blues Alley and the now-defunct Bohemian Caverns, a staple in the U Street corridor that opened its doors in 1926 and finally closed them in 2016.

“You can still find jazz on U Street and in other parts of the city, and the presence of nearby Duke Ellington School of the Arts continues the tradition of training jazz artists of the future,” Jackson says.

“We’re privileged to have such a distinguished talent in music affiliated with the university,” Jackson says of Moran.

A 2010 MacArthur “Genius” Fellow, Moran composed the score for the film Selma and serves as artistic director for jazz at the Kennedy Center for Performing Arts. He joined Georgetown this past all.

Dwandalyn Reece, curator of music and performing arts at the Smithsonian’s National Museum of African-American History and Culture moderated the Tuesday evening conversation between Jackson and Moran in Georgetown’s Copley Formal Lounge.

Moran will perform musical selections depicting DC’s connection to jazz during the Oct. 3 event at the university’s Davis Theatre. He will be joined by Connaitre Miller, associate professor of music and coordinator for the Afro Blue vocal jazz ensemble at Howard University, and DC jazz pianist and composer Mark G. Meadows.

Jackson hopes those who read DC Jazz will walk away with a better understanding of the city’s connections to the genre.

“Jazz is a story of people who use music in the fight for equality and dignity,” Jackson says. “There could be no better use of music in the African and American tradition.”