A recent study led by a Georgetown doctor suggests that probiotics should be considered standard care for protecting premature infants from a severe gastrointestinal disease. 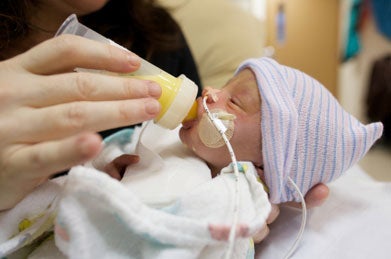 The United States has nearly a half-million babies born prematurely each year, which puts them at risk of developing a gastrointestinal tract infection called necrotizing enterocolitis (NEC).

Georgetown’s Dr. Dan Merenstein recently was senior author on an article in the prestigious JAMA Pediatrics suggesting there is ample evidence for the use of probiotics in protecting preterm infants from a devastating and often deadly disease.

Nearly a half-million babies each year are born prematurely in the United States, putting them at risk of developing necrotizing enterocolitis (NEC), in which the gastrointestinal tract becomes infected and causes destruction of the bowel.

The researchers believe probiotics, or bacteria many consider useful in maintaining the natural balance of the intestinal tract, should be considered standard care for infant NEC.

“Although probiotics products are sold at every supermarket and are present on hospital formularies, the [U.S. Food and Drug Administration] demands that probiotic research that makes a health claim obtain an investigational new drug (IND) application,” wrote Georgetown University School of Medicine’s Dr. Merenstein, along with Dr. Andi L. Shane of Emory University School of Medicine and Dr. Girish Deshpande of the University of Sydney’s Nepean Hospital.

“Consumers and clinicians are in a catch 22 where they can buy and use all sorts of probiotics, but FDA regulations are stalling research,” Merenstein says.

Even if an infant survives NEC, the baby faces multiple surgeries and possible long-term impairment. The economic impact of treatment alone is reportedly as high as $1 billion a year in the U.S.

The authors note that many hospitals in Australia, New Zealand, Finland, Italy and Japan use probiotics on a regular basis for preterm babies with NEC, the authors say.

In 2010, a study review by the American Academy of Pediatrics acknowledged the evidence that probiotics prevent NEC, yet stated that “more studies are needed.”

But the authors of the recent JAMA Pediatrics article say that that recommendation conflicts with a conclusion by Cochrane Reviews, an international network that provides evidence-based reviews of current research.

In 2011, the authors say Cochrane Reviews identified 16 clinical trials examining the use of probiotics to prevent NEC and concluded that “…our updated review of available evidence supports a change in practice.”

Merenstein and his co-authors are proposing that “…the probiotic administration to prevent NEC be studied in a comparative effectiveness design…” without the need for an IND. “The other option is to continue with the standard of care, in which no new products are provided; something we believe is ethically unacceptable.”