Psychology professor Abigail Marsh and researchers find people who donate kidneys to strangers have significantly different brain structures, according to a study published in today’s Proceedings of the National Academy of Sciences (PNAS).

PEOPLE WHO DONATE KIDNEYS to strangers have significantly different brain structures than those who don’t.

That’s the finding of a study published in today’sProceedings of the National Academy of Sciences (PNAS) by Georgetown researchers.

“The results of brain scans and behavioral testing suggests that these donors have some structural and functional brain differences that may make them more sensitive, on average, to other people’s distress,” Marsh explains.

The Georgetown researchers used functional MRI to record the neural activity of the kidney donors and 20 control subjects who had never donated an organ as they viewed faces with fearful, angry or neutral expressions. 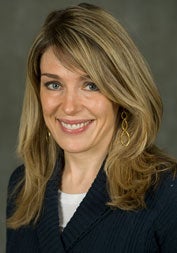 “The brain scans revealed that the right amygdala volume of altruists is larger than that of non-altruists,” Marsh says. “The findings suggest that individual differences in altruism may have an underlying neural basis.”

These findings dovetail with previous research by the professor showing structural and functional brain differences that appear to make people with psychopathic traits less sensitive to others’ fear and distress.

These differences include amygdalas that are smaller and less responsive to fearful expressions. People who are unusually altruistic may therefore be the opposite in some ways from people who are psychopathic.

Harold Mintz, former northern Virginian who volunteered with WRTC and agreed to participate in the Georgetown study, donated a kidney to an anonymous stranger he later learned was an Ethiopian refugee who had settled in Washington, D.C.

Mintz, who now lives in California and speaks to high school students about his 2000 donation, says a series of events over time led him to supply the kidney, including his father dying of cancer diagnosed too late at the age of 56.

One Valentine’s Day in 1988, Mintz and his wife were shopping separately for presents and Mintz noticed parents in a mall with a sign saying “Please Save Our Daughter’s Life.” He walked past them, then turned around and asked what they needed. It turned out the daughter had leukemia and needed a bone marrow transplant.

The couple decided to forget about the holiday and donated blood to see if either of them were a match. But no match was found and Mintz later noticed the daughter’s obituary in the newspaper.

Mintz also was surprised to hear that although the couple’s daughter had just died, they thanked everyone who tried to help and expressed hope that they might help someone else.

Marsh notes that kidney disease is now the eighth-leading cause of death in the U.S., and that living kidney donations are the best hope for restoring people to health who have kidney disease.

“Dr. Marsh’s work is a great example of how fMRI can be used to provide insight into how differences in the brain’s response can lead individuals to perform such magnanimous acts,” VanMeter says.