Presidential candidate and Vermont Senator Bernie Sanders talks about what it means to be a democratic socialist in America.

“He saw one-third of the nation ill-housed, ill-clad and ill-nourished,” explained Sanders to a packed audience of Georgetown students, faculty and staff in Gaston Hall. “And he acted, against the ferocious opposition of the ruling class of his day. … Roosevelt implemented a series of programs that put millions of Americans back to work, took them out of dire poverty and restored their faith in government.”

“Almost every program he produced, every idea he introduced, was called socialist,” Sanders added, to cheers.

The newly created GeorgetownInstitute of Politics and Public Serviceat theMcCourt School of Public Policy, which has extended an invitation to every major candidate in the 2016 presidential election to speak at Georgetown, sponsored the event.

Students stood in line for hours in the rain to get in to see Sanders, the first to accept the invitation. 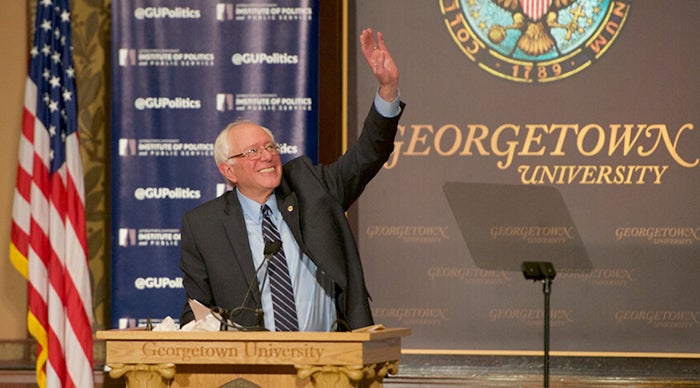 Lamenting that the wealth of the top 1 percent of people in this country is equal to that of the entire bottom 90 percent, the presidential candidate called for a new movement that provides free health care, living wages, social security, affordable higher education, paid leave for new parents, a government policy that combats climate change and appropriate taxation of the wealthy, to name a few.

“We need to create a culture, an entire culture, which as Pope Francis has reminded us, can not just be based on the worship of money,” said Sanders, who was elected to the U.S. Senate in 2006 after 16 years as an Independent in the House. “We must not accept a nation in which billionaires compete as to the size of their super-yachts while children in America go hungry and veterans who have put their lives on the line to defend us sleep out on the streets.”

Sanders called for full implementation of FDR’s Second Bill of Rights, a program for economic and social justice advanced in the World War II-era president’s 1944 State of the Union Address.

Noting thepersistent racism and other discrimination that still existsin America during his speech, the one-time civil rights activist said the words of Martin Luther King Jr., are truer than ever today: “This country has socialismfor the rich, and rugged individualismfor the poor.” 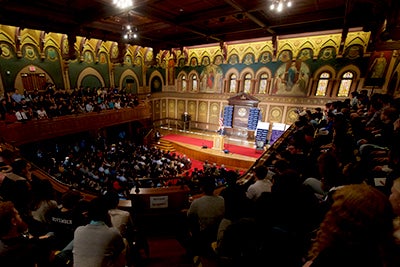 “Our major priority must be to defeat ISIS,” he said.”Nations from all over the world who share a common interest in protecting themselves against international terrorism must make the destruction of ISIS the highest priority.”

Following his remarks, Sanders engaged in a question-and-answer session with the university community, moderated by Mo Elleithee, the Georgetown Institute of Politics and Public Service’s executive director and a 20-year veteran of national politics.

Students asked questions that ranged from how Sanders would help make private universities more affordable to how he believes terrorism is connected to climate change. 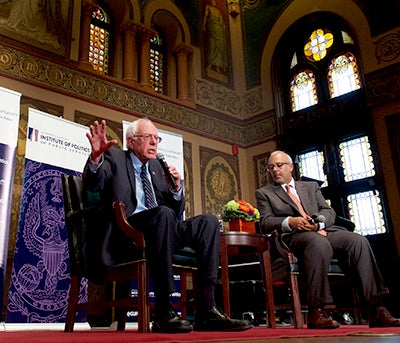 Ellithee said he was proud that Sanders chose Georgetown to make a major speech.

“This speech is one of those defining moments in a presidential campaign,” said Ellithee before the event. “For weeks, Senator Sanders and his team have been signaling that he intends to have a thoughtful discussion aboutwhat it means to be a ‘democratic socialist.’We are psyched he chose Georgetown as the place to have that conversation.”

Launched in the fall of 2015, the Georgetown Institute of Politics and Public Service is dedicated to reconnecting young people with the idea that politics is a noble vehicle for public service.